Angela Grzywinski, who owns and operates Tempus Eventing in Fort Worth, Texas, set a goal to compete her Thoroughbred mare Novelle in a Mini Prix. She got that chance last month and ended up winning! Many thanks to Angela for writing about her experience in Hunter/Jumper Land. 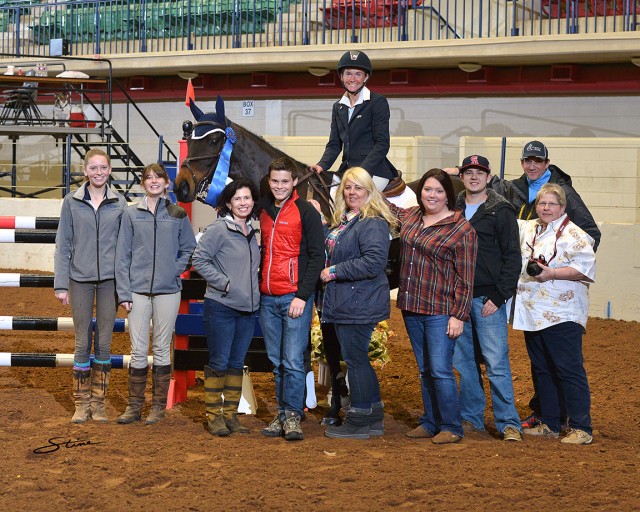 My awesome group of supporters after the win. Photo used with permission from www.DonStine.com.

Every year, I ask my students to sit down and write out their goals for the upcoming year. My two biggest goals in 2012 got put on hold with stone bruises and life happening, but in 2013 and the beginning of 2014, I finally accomplished what I set out to do. I wanted to become ICP Level 3 certified, and I wanted to compete my mare Novelle in a Mini Prix. Novelle is a 12-year-old 15.3-hand (I always call her 16 because it sounds better, but let’s face it, I call myself 5’4″ and that’s not the truth either) Thoroughbred mare.

I have owned her for eight years, and she’s my best partner. We have been working on the move up to the Advanced level and are aiming for Red Hills CIC3* in March. Novelle has always naturally excelled in the show jumping and has currently gone 15 rounds at the Intermediate and Advanced level without a jumping penalty in that phase. So, naturally, I wanted to cash in on her talent and try something a little different.

We were originally entered in a Mini Prix in the fall of 2012, but an untimely stone bruise put that on hold. I ride with Mike Huber and clinic as much as I can with show jumping legend Greg Best, and they both kept supporting my idea of challenging myself to get to one. I believe that cross-training eventers is vital, as the best at our sport are ones who could be competitive in the straight dressage ring as well as tackle the jumpers. So when the timing for the Blue Ribbon Winter Show in Waco presented itself, I eagerly entered myself and five of my junior students ranging in levels from moving up to Training to moving up to Intermediate. What better way to hone the show jumping phase then jumping all week?

The show offered classes from 2’9″ to 4’6″ and everything in between. My Mini Prix was scheduled on Friday afternoon at 1.25 meters. I had hoped that Mike would be able to come down and coach me, as he’s always been my biggest supporter and knows me and Novelle so well, but he was preparing to relocate his entire barn to Florida for the winter season. He enlisted the help of the Zone 7 NAJYRC coach and amazing jumper rider Matt Cyphert to help me.

We arrived late Tuesday night with six horses. My students didn’t join me until later in the week, so I had the opportunity to compete their horses early in the week as well. During the week, I competed Novelle in two 1.20-meter classes and came second to Matt both times. That guy is a beast. He shaved every second off every turn that he could and got the most out of every horse he sat on.

My $5,000 class came on Friday afternoon. With Matt and Mike’s help (poor guy still had to give me advice from three hours away), I decided to jump Novelle in a small class in the morning, as she had decided this whole jump off thing was way fun and drifting left so badly I was afraid we we going to wipe out a rail with my left leg. The idea to jump her small and slow was a good one.

Matt and I walked the course and talked strategy about the jump off, and I was on board with all his ideas and very excited. The course didn’t seem as huge as I had imagined, so I was just plain excited to tackle it. Many of my students and their families made it down to watch, and my sister was able to come, which meant so much to me.

In the order of go, I was first. I know many people have negative feelings about this; I personally love laying down something that others have to chase. I do my best and let the others do what they will. Novelle jumped amazingly well and straight in the first round — thank goodness — and we were on to the jump off. I went as fast and turned as hard as I could and just hoped it would be enough at the end of the class. Approximately half of the class made it to the jump off, and in most cases, the quality of the jumping was sacrificed by people trying to go fast.

And then in walked Matt. He was riding his own Lochinvar, who was also entered (and subsequently won) the $10,000 class the next night. Matt made the first round look like a 3-foot class. I was suddenly very nervous. As Matt had done in all of the classes, he started out smoking around the jump off. By the time he approached the last jump, he was 4 seconds up on my time. He wasn’t just going to beat me, he was going to slaughter me. Unfortunately, the last rail came down for him, and Novelle was the winner. I was bummed for him, as he was by far the better round. But I was so excited to not only have completed one of my goals but to have won!

We spent the evening celebrating, and after the big class, Novelle was done for the weekend and spent the next two days resting and remembering that dressage is still a necessary part of her repertoire. By this time, my girls had all arrived and were able to fill their plates with as many rounds as they wanted. I also entered two of my girls in the $3,000 1.15-meter High Children’s/ Adult classic. Alyssa Phillips and Bliss III were second, and Bailey Snyder and Wingman were fourth.

Attending our first “A” show was an amazing experience, and it taught me many things:

Last but not least, I’d like to thank the people who made this dream come true: My students and their families for supporting my crazy idea to haul a bunch of eventers to the show, my coach Mike Huber for always being my coach (20 years and counting!), Matt Cyphert for the great game day help, Greg Best for inspiring me at the age of 6 in 1988 with his silver medal performance, my vets Dr. Skeet Gibson and Dr. Reese Hand and farrier Eric McConnell for keeping Novelle in top shape (these guys showed up Sunday night after the show to get Novelle ready to leave for Florida the following morning), Tegan for being the best helper I could have for the week, my sponsors Majyk Equipe and Point Two air jackets, and my family. Seeing my non-horsey sister cry when I won was truly special.

So find a local jumper show and give it a try; I guarantee you will learn a ton and have a blast. 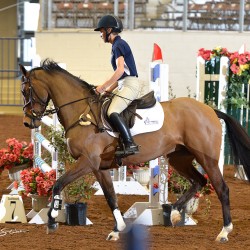 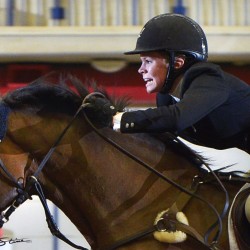 Alyssa’s determination at the last fence. Photo used with permission from www.DonStine.com. 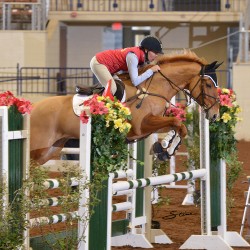 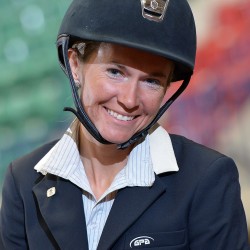 Happy after the win. Photo used with permission from www.DonStine.com.