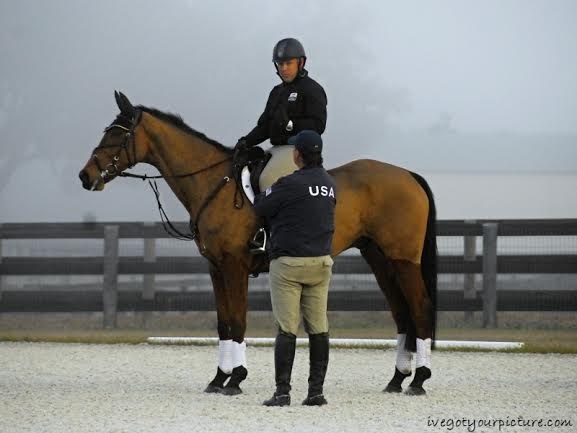 Buck and Park Trader at the Training Sessions with David O'Connor. Photo by Ivegotyourpicture.com.

I was unable to attend yesterday’s session — thankfully our good friend Thehorsepester did! — but I caught almost all of today’s jump lessons with coach David O’Connor at Meredyth South in Ocala. The day started very foggy, damp and chilly, but a dozen spectators showed up to watch. The riders who attended were:

I had to leave before Sydney rode. My apologies for not being able to include her in this write up!

David started almost every horse out warming up over canter rails 30 feet apart, done in two strides and then three strides. He demanded that riders keep the horses round and “in a shape” before, during and after the exercise. With the horses in a round, deep frame, they lifted their backs and showed good footwork. After the poles, riders moved on to an oxer, which became wider and wider with each successful pass. The low, wide oxer was particularly useful for Park Trader, who demonstrated a tendency to jump up high in the air and a bit carelessly with his front end; the extended width made him change his shape in the air, reach forward up and out with his forearm and finish through cleanly behind.

As each rider came to the oxer, David stressed that riders work on their communication with their horses — keeping them round and placing the horses closely to the base for maximum gymnastic benefit. It took Meghan O’Donoghue a few tries to get the shape and placement that David wanted. She had been allowing Pirate to lope over the oxer in a huntery frame, while David insisted on a more collected, powerful step.

“In the warmup at Rolex, you’re only going to have seven to 10 fences,” David said.  “You have to make those fences count, you can’t waste jumps when your horse is tired on the last day. You have to create your shape early in the warmup.” Noting that Meghan doesn’t have 12 horses to jump at home (like Buck), she needed to make the most of every opportunity in schooling her horse. She did quite a lovely job to finish up her lesson.

Sharon White and Wundermaske also struggled a bit with staying round through the poles and approaching the low warmup fence. With poles and small jumps, David said it’s no different than flatwork. Insist that the horse stay in a frame — and yes, that comes from your leg and seat, but you can’t do it without your hands.

After the oxer, riders moved on to a simple “Y” shaped exercise: single vertical, six strides curving right or left to a square oxer. The challenge was in riding the turns — going forward, pushing into the apex of the turn, and then showing patience to wait it out for a good, deep distance. Especially for horses that were a little lazy or slow in their footwork (like Wundermaske and Sir Oberon), riders worked on lengthening and shortening sharply to get the horse active behind and in front of the leg.  It was the first time I’d seen Sir Oberon, and he is quite a lovely horse; he has beautiful changes and is a scopey jumper with excellent technique. However, David noted that the horse’s athleticism had been letting Ellen get away with mistakes up to this point; looking forward to the four-star level, shell have to insist on better straightness and more quickness behind so Obie will have the tools to jump big fences well even when tired at the end of a three-day.

To finish the lesson was a big oxer, gentle bending line to a three-stride vertical line aiming right into the crowd and corner of the ring. David preached that riders must control the shape of the horses’ jump to suit the course; that same oxer in should ride differently depending on what the “out” was (a vertical combination vs. an oxer one-stride, etc). Upon landing on the final fence, riders were told to pay close attention to land straight and then turn — do not turn in the air. Horses anticipated the corner and often cut sideways in the air over the fence, landing crookedly. On a tired horse, David said, they will slice their hind end down to cheat that turn, and it will result in a rail. Be disciplined about taking off straight, landing straight and then making a balanced turn.

Sinead Halpin and Manoir De Carneville (“Tate”) were the standouts of the day. The pair looked very sharp with fantastic communication, making all of David’s orders look easy. Tate was full of jump, but supremely obedient; he was available to Sinead’s command to go or half-halt at any stride. And all this for only their third jump school yet this year!

Buck Davidson and Petite Flower showed dramatic improvement during their session. Petite Flower was quite a hot firecracker of a mare. David insisted that Buck get her rounder and more steady, not so quick in the last stride before the fence, and he asked Buck to make a small change in his position. Buck had a tendency to lean at the fence a little through the turns — “hunting a distance” — and the mare reacted by getting quick, flat and against his hand. David reminded Buck to keep his shoulders up — don’t lean! — and Petite Flower responded beautifully with a much softer jump and better shape. It was a reminder that even the best riders can fall into a common habit, and the smallest detail can affect a horse’s performance.

“Train your cluck.” David encouraged riders to use their voice (cluck) for an increased response to the leg — sort of like a power boost button. This is a learned response, though — don’t expect your horse to just do it. To work on it, take your horse into an open field and canter. Cluck, and immediately gallop away so the horse associates “cluck” with go forward (REALLY forward) now.

“Hips square to the fence.” David stressed straightness in every aspect of the ride — between fences, through turns, on approach and on landing. To improve straightness on approach, he suggested that riders visualize riding their horses’ hips square to the fence. We talk and worry a lot about keeping the horse’s shoulders square coming to a jump, but sometimes we let the hind end fall out. Riding the hips straight, perhaps with a little haunches-in through a turn, allows them to push off evenly with good shape over the fence.

Accuracy and attention to detail. Strive to make every fence perfect; if something didn’t work, make a change. Don’t just repeat the same mistakes. Late changes and laziness (behind the leg) were not acceptable. You are schooling every moment you pick up the reins, so make it count.

Forward into the corner, then wait. Lynn Symansky and Donner, as well as Buck and Petite Flower, demonstrated this concept very well. For horses who get tight and then like to make a bid at the fences, it’s especially important to keep moving through the turn, using your seat with a flexible elbow, so you can be patient and wait for a distance. Don’t just take the first one you see! Actively moving through the turn promotes elasticity and throughness in the horse, leading to a better, rounder shape of jump. And on landing with a hot horse, move your hips first, then ask with your reins — don’t snatch the mouth first; the horse will just brace against you. David even encouraged Buck to do the “funky chicken” with a little elbow flapping (quiet hands) to avoid locking the mare’s back.