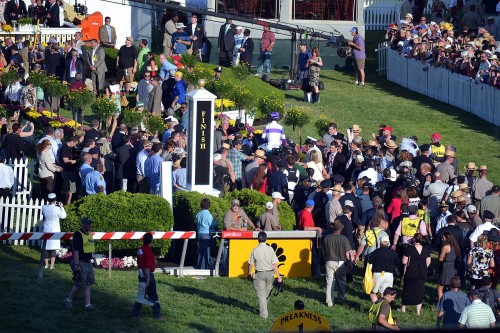 The view from the grandstands as I’ll Have Another and Mario Gutierrez make their way toward the winner’s circle.

Hooked: It’s what I heard someone say leaving Pimlico yesterday, where a record crowd of 121,309 assembled to watch Bodemeister and I’ll Have Another surge toward the wire. Hooked—and I had to smile, because I would’ve been, too, if I wasn’t already, completely. Even better than the Derby, I thought—and even now, hours later, I can’t get over it. Only three weeks before the Belmont, and in the meantime, I won’t doubt I’ll Have Another’s history-making potential.

But since Affirmed won the Triple Crown in 1978, 11 horses have won both the Kentucky Derby and Preakness before coming up short in the Belmont. “The horse deserves the credit,” jockey Mario Gutierrez humbly told the Thoroughbred Times.  “He has proven himself in the run. I just want to prepare. I want to be on the same level as him. He’s an amazing horse, and I’m happy to be riding him.” [TT]

What are his chances for another? Bodemeister’s trainer Bob Baffert has said his colt won’t run in the Belmont. But Dullahan, who was third in the Derby before skipping the Preakness, is expected to make an appearance. [ESPN]

Following the success of his on-site Preakness preps, trainer Doug O’Neill will ship I’ll Have Another to Belmont Park today. [Washington Times]

Saumur CCI*** Update: Following cross-country, Aussie Chris Burton is one-two on Holstein Park Leilani and Haruzac; Tiana Coudray’s sitting 16th after a run-out; Canadian Lindsay Pearce is 20th on Saniki, with whom she added only time penalties to her score, and 39th on Candar van het Neerveld, with whom she had one stop, and Julian Stiller was eliminated on both of her horses. [Scores] [Photos via Uptown Eventing]

Clayton Fredericks, who was hospitalized after a fall from Be My Guest in the CCI***, is said to be “well and relaxing in the Angers hospital. He feels fine, a little pain but needs a few quiet days and will be scanned again before he comes home.” [Team Fredericks]

Back stateside, so many events are underway this weekend. Notably, Sarah Dunkerton and Matapeake are leading Chattahoochee’s CIC**, Alexandra Green and Falkonet are ahead in the CIC*, and Becky Holder and Courageous Comet are atop the advanced. [Scores]

Wet ground at Greenwich has forced the removal of 15cm of soil from underneath the Olympic equestrian venue’s grandstands. The waterlogged ground posed a safety risk and will be replaced with stone or steel. [BBC]

An amendment to the FEI’s 21-penalty frangible pin rule is scheduled for submission/consideration this week: “It suggests that if a competitor breaks a pin without falling, the rider continues penalty-free. Then there is an enquiry by the ground jury and technical delegate who assess the video footage.” [Horse & Hound]

Top of the Tweets: I’ll Have Another: Me/Bode = 2012’s Affirmed/Alydar? Hey Bode, you make me a better a racehorse, so thanks @ZayatStables @Midnightlute

Save on the Samur XC course: