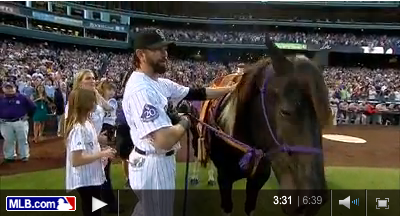 Unlike fellow pro athlete Eric Berry, (captured quaking in his cleats, muttering “I don’t fool with no horses, boy,” as his equine team mascot trotted by) Colorado Rockies first baseman Todd Helton’s not scared of horses at all.

Which is good, as the team gave him one as a retirement present in a ceremony at his last home game in Denver this week. (VIDEO)

After his daughter threw Helton the ceremonial first pitch of the game, officials walked champion American paint horse A Tru Bustamove down the third based line. Helton, his wife and daughters (who seemed far more excited about the horse than the baseball player) have a ranch.

“We all know that you need more than one horse,” said the announcer, as the gelding approached the Heltons.

Helton patted the horse with his baseball glove and high-fived teammates.

Then he hit a home run.

Maybe Berry should find a 12-step program for equiphobia.