Why just go clear when you can go for glory? Area VIII took that motto to heart on cross country day at the Adequan North American Youth Championships where they’ve moved into gold medal position.

The squad of Elizabeth Henry/Charlotte La Bouff, Cierra Daratony/Rio de Janerio, Gracie Elliott/Ballylanders Finn McCool, and Tate Northrop/Fine With Me all jumped clear, picking up only 2.4 time penalties between the four of them.

When they’re not shattering nearby eardrums while cheering for each other, these girls are bonding over purple shampoo–because every single one of their horses are grey.

Here’s what they had to say in this afternoon’s press conference:

Individually, Charlotte Babbitt remains out in front with her own 2 A.M. after delivering a double clear performance. 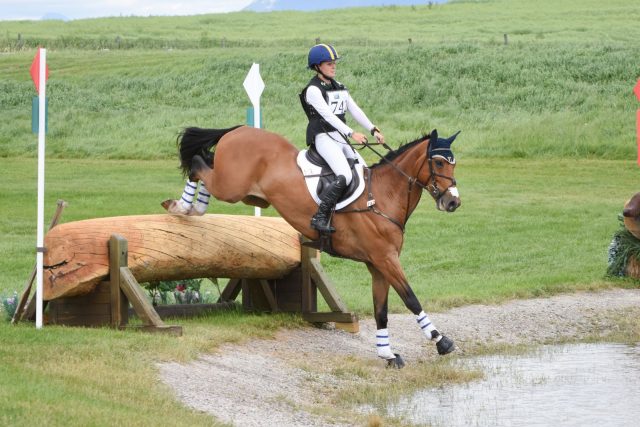 Charlotte is riding for many reasons this weekend: for herself, for Area VI, and for a dear friend, Don Trotter, so sadly passed away this year.

“This whole weekend I have been riding for Don Trotter. He was one of my biggest mentors, and loosing him was really, really hard, so I went out on course today wanting to ride for him, and I really felt like I would’ve done him proud,” she said.

Fist-pumping through the finish, she’d done them all proud, and she heads to the final phase on her dressage score of 24. She’s pleased too as the score reflects the performance, which is a culmination of hard work with the 7-year-old Dutch Warmblood (Sheraton x Regina K, by Ahorn).

“He’s so much bolder into the water these days, and he’s a lot more adjustable. It’s not as much of a forward and back kind of thing like I used to have to ride him. I can kind of pick one pace and stretch up and half half and he’s right there,” she said. “He’s so smart–he looks for the flags, and that’s something we’ve really worked on. Being a young horse, that’s something he’s lacked in the past, he doesn’t follow my eyes, but now he really does. That’s a really cool feeling to have.” 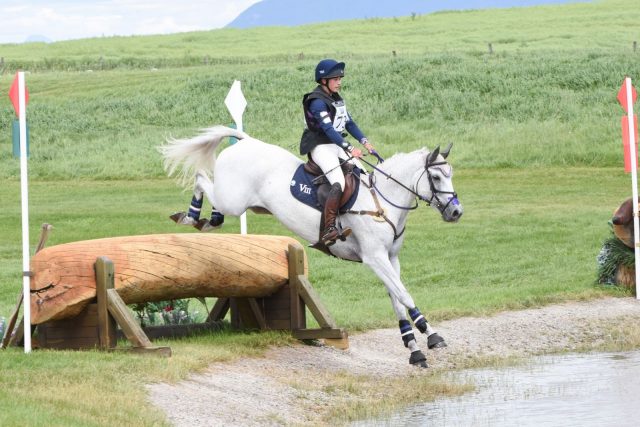 Second-placed Elizabeth Henry was the anchor rider for the leading Area VIII team with her own Charlotte La Bouff.

Piloting the 11-year-old Oldenbrug home double clear, Elizabeth also had someone special on her mind, her Aunt Lori who passed away this year.

“We had a little bit of trouble in the water… My aunt passed away this year, so on my Flair strip I wrote, ‘Go get ’em, mama’ because that’s what my cousins asked me to do for her. I really think she was watching over me through that and it really helped me,” she said.

Her success today –she’s still on 24.9 points — was also carried on the wings of her teammate’s contagious spirit. “They were spot on. It was amazing having them coming back, and getting feedback about the course. When I heard other people having trouble, I really wanted to focus. I went through my course again and knew what I needed to do, and made sure I went in there knowing I had plan,” she said. 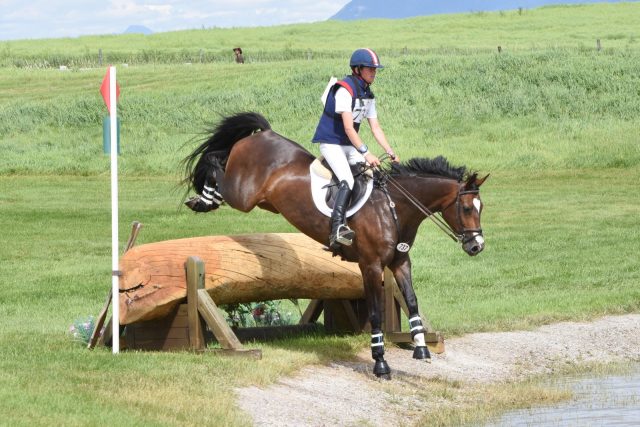 Speed demons Ben Noonan and Keep Kitty, and 8-year-old Hanoverian mare (King Julio x Emelie, by Escudo I), have done nearly everything in this sport together, including nailing their first NAYC cross country debut double clear. They’re currently in gold medal position on a 27.

“With doing my first couple of events on her I didn’t know how fast I should go, so I was always going way too fast, so my coaches and I still are working on at least taking a pull before the jumps. They say I need to slow down a little bit. Today I tried to slow down, and I felt really good about it.”

His Area IV team are also in bronze medal position.

“I did have my teammates coming back to be and reporting how the course rode, especially at that first water. That turn back was really tight, so everyone was like, ‘Go slow there. Keep the shoulders in front of you.’ That was really good hearing back from them. Everything else I tried to keep to my plan,” he said. 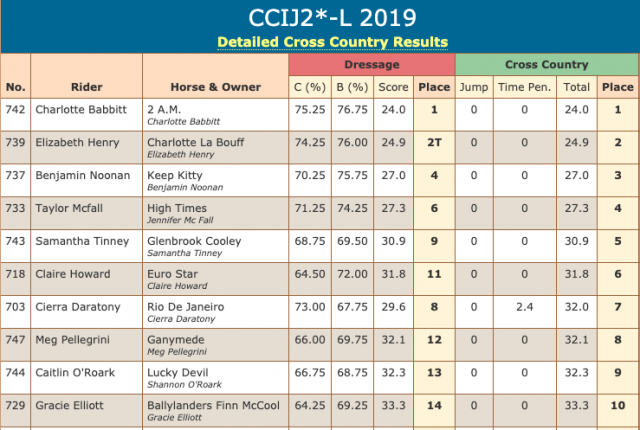