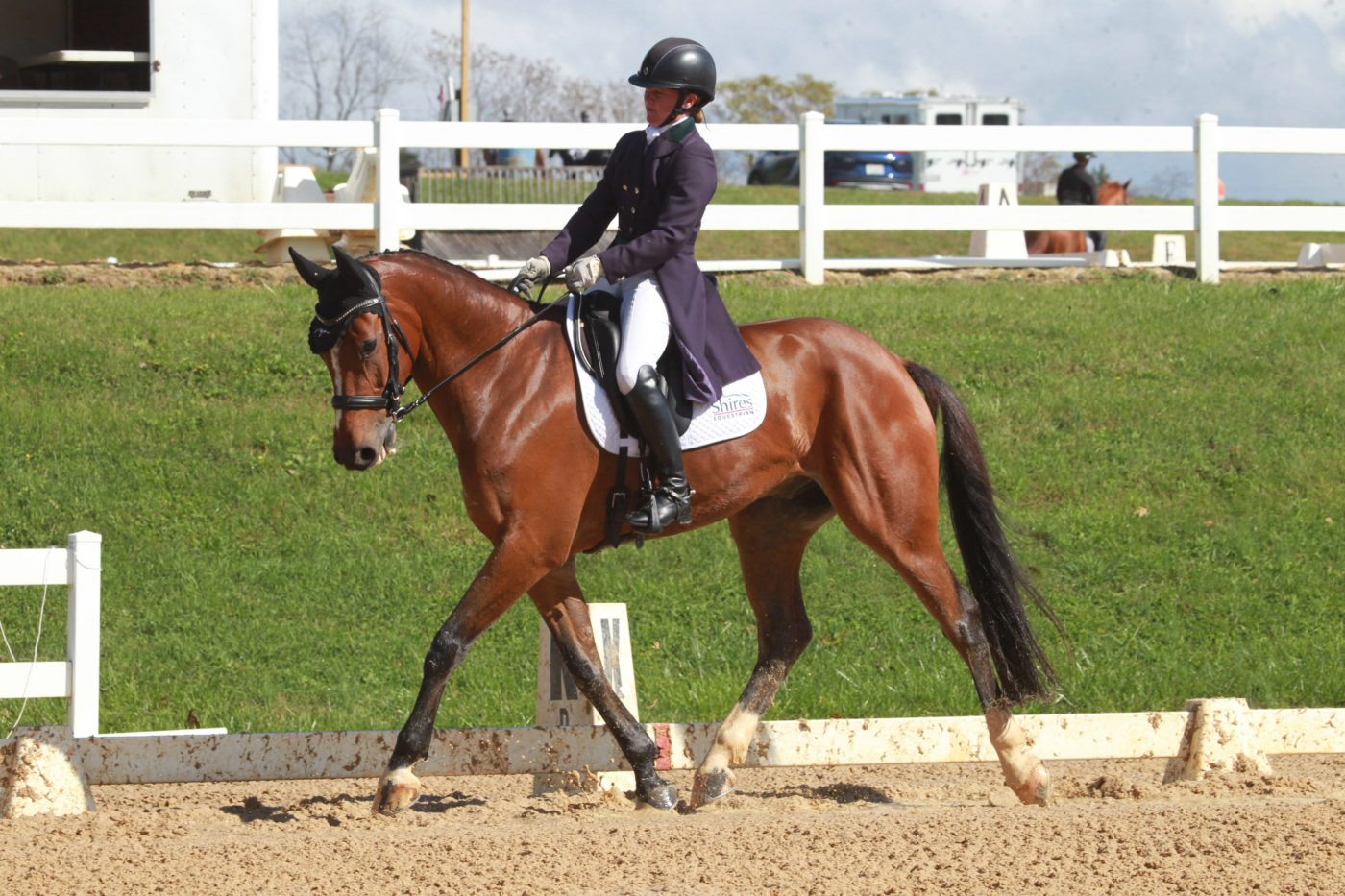 The FEI divisions completed dressage and some show jumping Friday at the VHT International & Horse Trials, which plays host to over 450 horses as well as the USEF CCI2*-L Eventing National Championship this weekend at the Virginia Horse Center.

Vass, NC-based Ariel Grald leads the way in the CCI3*L division on the 7-year-old Diara (Diacontinus – Lady Revens), owned by Annie Eldridge, scoring a 26.4 in the Hanoverian mare’s first appearance at the level. The mare moved up to Intermediate over the summer and has done two CCI3*-S competitions in preparation for this event, which Grald noted will be a great fitness run.

“The biggest thing was with me being gone for Aachen I felt that [the CCI3*-L at Maryland] was going to come up too fast,” Grald said. “And with the horse only being seven and new to Intermediate and three-star, Fair Hill would’ve been a big ask. I wanted to come to VHT because it has good terrain on the cross-country and I feel like being able to run up the hills. I feel like the three-star level is the first where the horse really has to get fit. So I wanted to come here because I knew the track would be good for fitness.”

Of Diara’s winning dressage performance, Grald said, “She was very good. She is really reliable on the flat, and she just tries really hard. Everything that she does, she just wants to please, so it’s really a joy to ride her. She’s definitely feeling very fit! There were a couple moments where I could feel her energy and enthusiasm starting to come through, so she was a touch unsteady, but she really is a good girl and she’s getting stronger.”

Grald is also tied for third place in the CCI3*L on a score of 27.9 with Annie Eldridge’s Isle de Coco.

Also riding for Annie Eldridge in the CCI3*S, Grald leads the way on the 10-year-old Forrest Gump 124 following dressage and show jumping on a score of 25.1. This Hanoverian gelding by Fuerst Nymphenburg was produced in England by Tom Jackson before coming over the U.S. to join Grald’s string this summer.

“It’s our third event together,” Grald said. “He is just a really genuine, sweet horse who just tries his heart out and I can’t say enough good things about him. All credit to the horse and his previous rider. I’m still just sort of getting to know him. I’ve never had a horse that someone else has produced, I’ve always just made my own so I’m sort of figuring it out as I go, but he’s a real pleasure.”

Based in Somerset, VA, Emily Beshear has taken the lead in the USEF CCI2*-L Eventing National Championship with her own Plumpjack (Pablo – Arrebol Babilovia), scoring a 23.9 in the first phase of competition. This is the second CCI2*-L start for the 7-year-old Westphalian gelding, and Beshear said she’s concentrated on keeping him focused and confident as the weekend progresses.

“I couldn’t be any happier with how [Plumpjack] performed today,” Beshear said. “Physically, everything comes very easily to him, but mentally he struggles. Today he stayed confident and willing even though I was concerned that the ring we were in would easily cause him to become distracted.”
The biggest challenge on cross country tomorrow, Beshear explained, will be getting the first few jumps out of the way. “I’ve had to work quite a bit to get him confident to head out to the first couple of jumps,” she said. “Once he gets jumping, he’s fantastic, and with the start of this course being so open with no distractions I’m hoping that it will help him be positive out of the box.”

Competing for the Harry T. Peters Trophy as a junior rider and leading the way in the early going are Area II’s Alexis Poe and Tell ‘M Nothin (Repent – Quick Interview), who are in 14th after dressage in the CCI2*-L on a score of 34.9.

Leading the CCI2*-S following dressage will be Purcellville, VA’s Kelli Temple and her own Dr. Diamond (Indoctro – Oakland Diamond), a 9-year-old Irish Sport Horse gelding she began a partnership with in 2019 after being sourced by Susie Pragnell in England. They added no penalties to their dressage score of 25.9 in the show jumping this afternoon to retain the lead after the two phases.

“We’ve worked really hard on the dressage,” Temple explained. “I work with Sally Spenard a lot, and she’s been super helpful. It’s not his most natural phase, but it is my strong suit and I enjoy it so I really have enjoyed working with him. He’s a wonderful horse to train and he really wants to do the right thing. I was surprised by my score today, which I thought was super and I was very appreciative, and then he went and jumped a clear round in the time, which is another thing I’ve worked on with him. He can be a little tense in the show jumping and it’s not my strongest phase, so to not only go clean but to make the time is a little bit harder for me. So I was super proud of him.”

Area VIII Young Rider Isabel Brunker and her own Oldenburg mare, Allia (Riverman – Tis Lycius), are the overnight leaders in the CCI1*-L division after scoring a 28.0 in the dressage today. This is the first FEI competition Brunker and the 13-year-old mare have entered, and the Georgetown, KY-based rider, who is a sophomore at Wake Forest University, describes her goals this week as realistic.

“Since this is my first FEI event and first time doing anything of this caliber, I didn’t really have super high expectations,” Brunker said. “I just wanted to go in and put my best foot forward and do what I was capable of. I feel like I was a little conservative in my test in places, but she’s pretty perfect already and my trainer, Erin Pullen, has been helping me a lot.”

Brunker voiced her enthusiasm for the CCI1*-L level, which provides a step up in technicality from its national equivalent Modified level. As for tackling David Taylor’s cross-country tomorrow, she says she’s looking forward to the challenge.

“I’m excited for the course. I think it looks super fun and I can’t wait to be out there and gallop around,” she said. “My goal is to get around clear and staying inside the time would be great. But we’ll take one fence at a time. I’m excited for the technical elements — my mare does really well with technical questions and makes them really fun to ride.”

The FEI divisions will run cross-country Saturday. Andy Bowles is the course designer for the CCI2* and CCI3* divisions, and the CCI1* and National courses are designed by David Taylor.