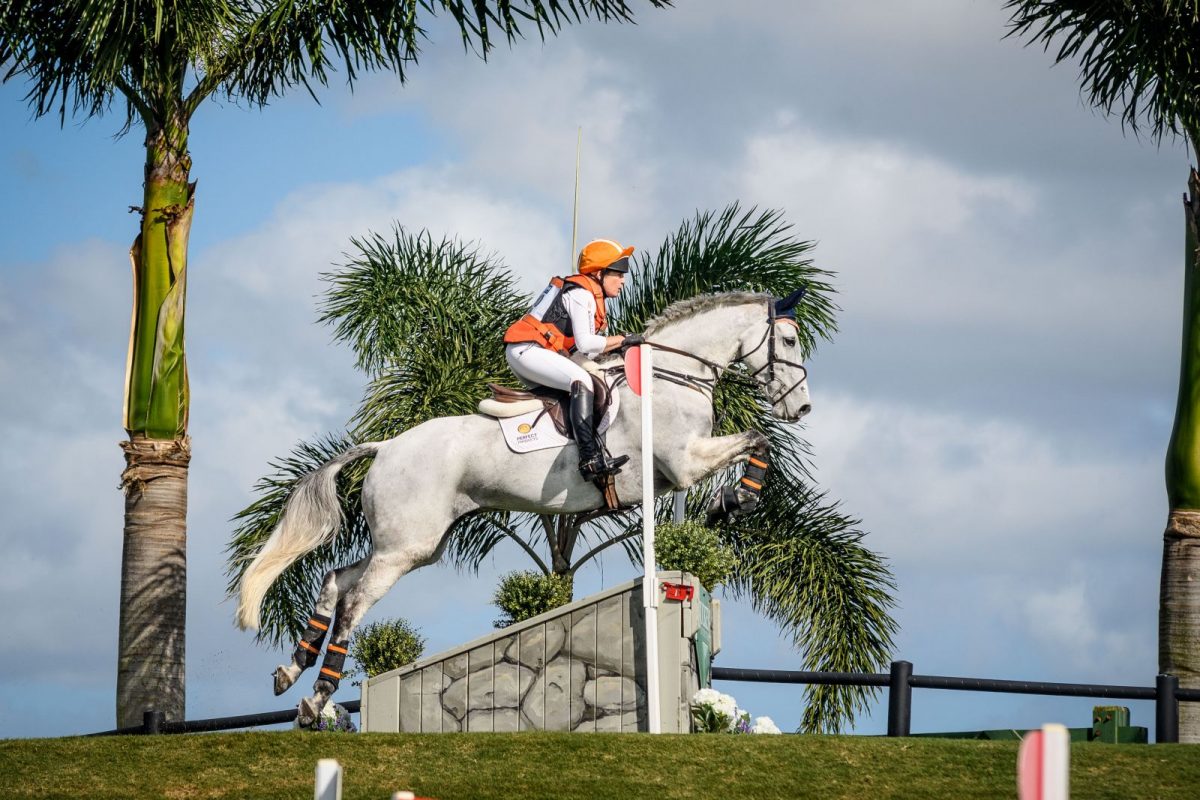 One of the hottest topics on the eventing scene has always been the idea of the pipeline. Where will the next generation of elite eventing riders come from? With many factors working against American riders — the cost prohibitive nature of professional riding, the hours and days spent in the trailer to get from one event to the next, the necessity of running a business built on multiple revenue streams — it can be a struggle to zero in on talent and properly cultivate it in a true and proper system. Producing future generations of riders then becomes a task that falls in scattered pieces to programs around the country. And while it’s true that robust programs exist to develop and strengthen up-and-coming riders, the fact remains that talent slips through the cracks each year.

In the sport of motocross, riders often find themselves attracting not just the support of sponsors but also that of professional race teams. Picking talent out from the lower ranks of the sport allows shrewd team managers to hedge their bets on a speedy kid long before the rest of the industry gets word. Similar in concept but perhaps farther reaching than the Eventing Pathway Program run through US Equestrian, the race team approach covers most of the bases — equipment, coaching, bikes and parts — so that the rider can focus on the immense task of making it to the top. As these race riders mature, that team becomes a talent incubator of sorts, the pipeline feeding promising superstars to the factory-supported race teams that bear the monikers of the best riders in the world. For all intents and purposes, it’s the big brother of the Pathway Program and other equestrian pipeline programs — a model, perhaps, to take some lessons from.

Of course, if you pay attention, it’s easy to see where some of the best rising talent is originating within the sport of eventing. Move the lens to the source of that success, and in most cases you’re assured to find a working, successful system. An incubator, if you will.

One such hotbed for talent is a 60 acre eventing sanctuary nestled between the Allegheny and Blue Ridge Mountains in West Virginia, at Sharon White’s Last Frontier Farm.

Success Comes from the System 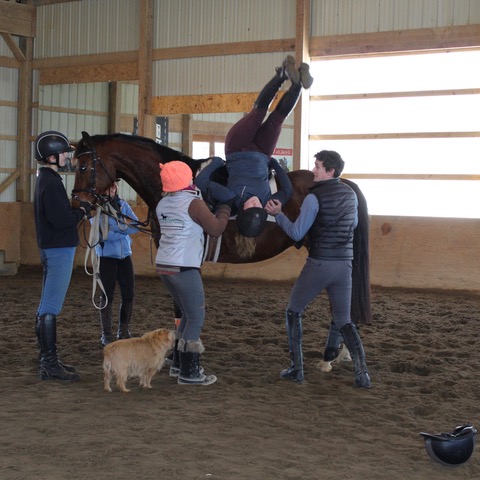 The cherry on top of Hell Week with Sharon White? A backflip dismount. Photo by Mary Pat Stone.

While many of Sharon’s students have made recent waves in the eventing headlines, the fact is that this program — one that has produced multiple upper level talents — came to be much by happenstance.

“I didn’t really set out to be a producer of riders,” Sharon reflects. “But it seems to have been a pattern and I seem to be good at it. But I feel very, very lucky because they all work so hard. I just want to help them become better than I was, faster than I was.”

I asked Sharon if there were any elements of her program that she felt were unique, a question she found she didn’t have a concrete answer to. Humble is another word to describe Sharon, who herself has enjoyed much success at the five-star level.

So I sought out a handful of her students, all of which have been or were in Sharon’s program for years, chipping away at what she refers to as “the art of riding.”

Two themes emerged from my conversations with five of Sharon’s past and present students: that horses go the way in which they are ridden, and mindset and mentality are perhaps two of the most important skills a rider can cultivate.

“The biggest lesson I’ve learned from Sharon is that horses go the way they are ridden,” Lea Adams-Blackmore, who rode with Sharon as a young rider, said. “So if you ride them to the jump like they are going to be weird and have an issue then that’s exactly what they will do.”

Horses go the way in which they are ridden. Sharon mentions this concept several times in our conversation, and I ask her to elaborate. “Horses tell you exactly what they are doing,” she explained. “They go the way they are ridden, handled and cared for. So you really have to be able to ride — be physically and mentally fit yourself, and know the ins and outs of the art of riding — to be successful. We have a responsibility to continue our own improvement which, because horses go the way they are ridden, means that our horses will continue improving as well.”

All of the riders interviewed for this article echoed the sentiment that positivity and productivity are the name of the game at Last Frontier Farm. But through the program’s core runs a thread of high standards. Care, training, fitness of both horse and rider — all of these components make up the complete horseman and eventing athlete.

‘The Bar is Raised’ 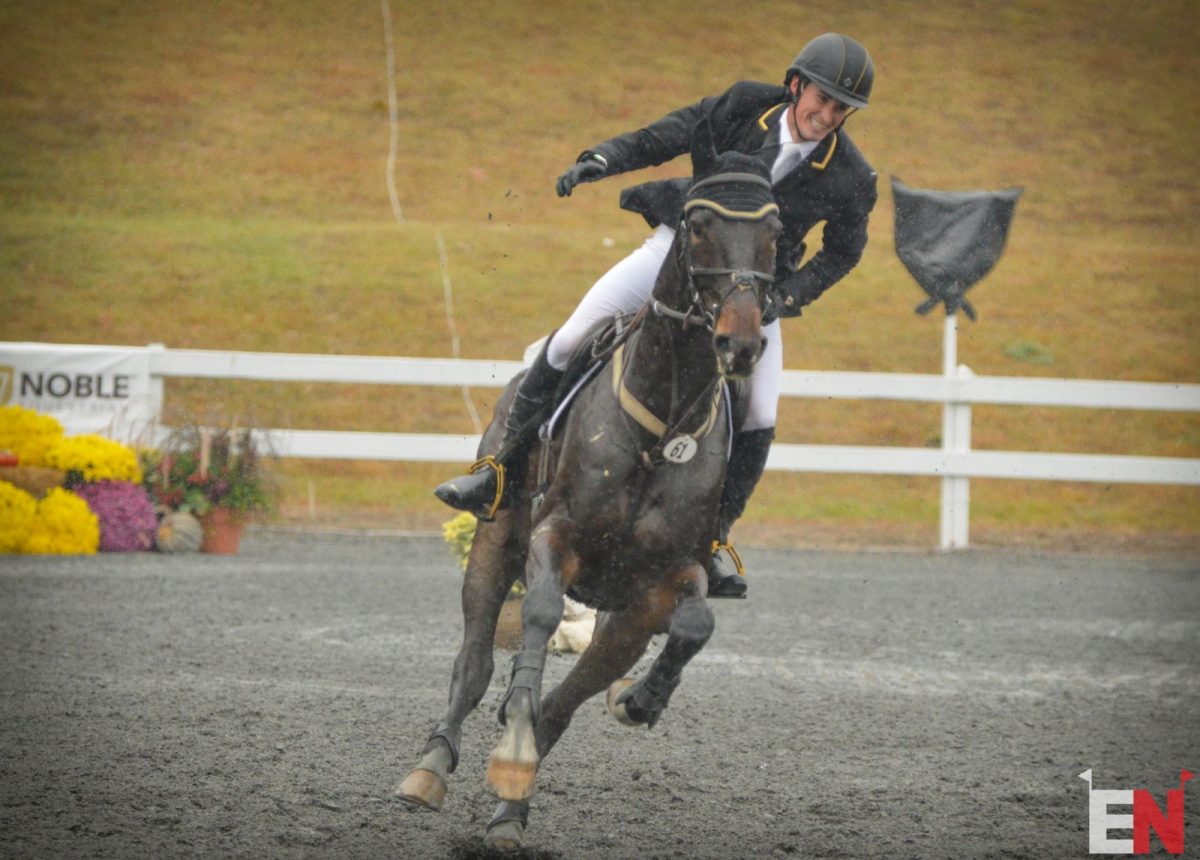 “The moment you start in her program, the bar is raised,” Woods Baughman, winner of the CCI3*-L at the Dutta Corp. Fair Hill International in 2019, reflected. “And she’s not afraid to push you to meet that bar.”

Indeed, Last Frontier riders can often be found participating in fitness workshops such as “Hell Week,” dedicated to core strength. All part of a big picture approach, Sharon knows how easy it is to get tunnel vision, focusing so hard on our goals or on competing that we lose sight of all of the moving parts that play into success.

And so, Sharon believes, having an all around understanding of health, fitness, and mindset should be a part of any training program. Mindset — and here’s the key: having proper control of it — plays into confidence. Confidence, mind control, and the subsequent ability to tamper our nerves and perform at our peak are, as with any other exercise, vital parts of training.

Sharon credits the practice of meditation, something she felt more than a little skeptical about at first but that she now credits for her improved mindset. She recalls 2019, a year of less than satisfactory results and plenty of ups and downs, as a year that really exposed the holes in her mentality. “All of last year was really interesting for me because I really worked on my own mental facilities more than anything else,” she explained. “Horses go the way they are ridden, and at Kentucky last year with (Cooley On Show), I was so worried that he would be bad at the start that he had no adrenaline by the time we got out there.”

“There’s a good learning moment there,” she continued. “I will take full responsibility for that ride. You always want to blame so many different things or make yourself feel better, but those are basically excuses. No one wants to just say, ‘wow, I sucked.’ If something goes wrong, I need to know steps X, Y and Z to fix it. And at that point, I knew I needed to get my mind under control.”

While Sharon says she does feel a significant difference since taking up meditation, she says it’s something she’ll continue to work on for the rest of her life. Controlling the mind, the ebb and flow of emotions that stem from it, is no small task. “I will continue to fail and succeed at this, as with everything else,” she explained. “But it’s something I’ll never be through learning.” It’s a concept taught by sport psychologists and mindset coaches, but it’s a tough one to grasp. Sharon’s continuing education and improvement of her own mindset and mental fitness have found permanent homes within her program. One more part of an ever-evolving system built on one set of foundational values. 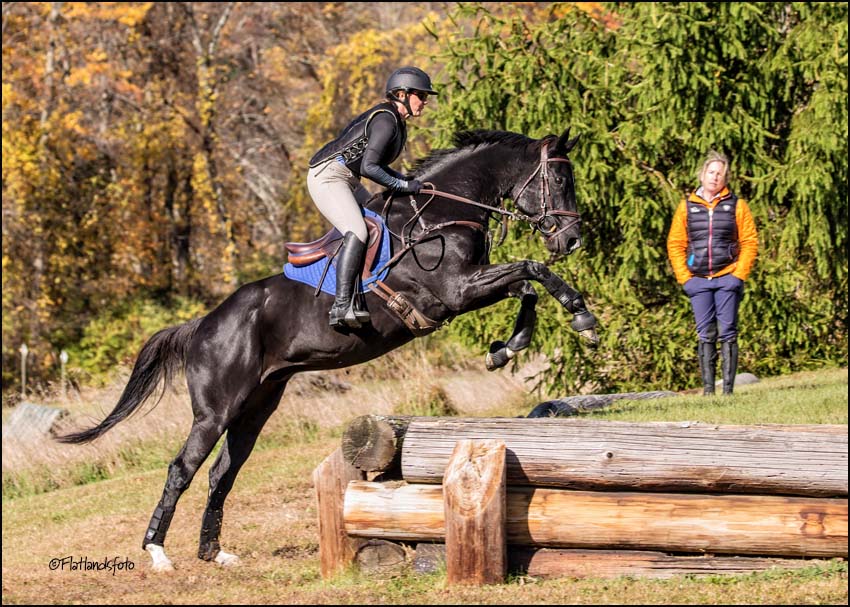 Ready to Spread Their Wings

Focusing on the core components of building a successful eventing athlete, Sharon has created a program that feels complete. Her students will step out into careers of their own, others will step in to fill their spots as the next young generation of competent riders. The consistency shows in her students’ results: success lies within a program. And it’s not just the success on the record that one should look to. It’s the confidence and the ability to make the lightning-fast decisions required of a rider on a cross country course.

Confidence and overcoming a lack of it is another recurring theme evident in my conversations with Sharon’s students. “Sharon is really into controlling your mindset to make things happen and she’s really helped me to overcome show nerves and just show up to do my job and bring home the results,” Woods explained. Lea echoed this sentiment. “I felt that especially in show jumping I would get super nervous and just try and get it over with, but Sharon’s teaching has definitely made it easier to go into the arena and take a deep breath,” she said.

The importance of proper preparation in every facet of our riding cannot be understated. Perhaps there are some lessons to be taken from the sport of motocross with its robust satellite incubator teams. There are certainly insights to be gleaned from successful programs such as Last Frontier Farm. The future of any sport is built upon its core of talent. Creating a pipeline and a system that welcomes talented riders and allows them to thrive and be healthy continues to be an important factor in ensuring eventing’s future.

And that system does work, but it takes a lot of personal investment from both coach and student. “I am a firm believer that working on all aspects of it — how to be a rider, a horseman, how to clean a stall really well, they have to do everything because to me it all matters,” Sharon reflected. “And anyone who is willing to do that? You’re going to do better.”