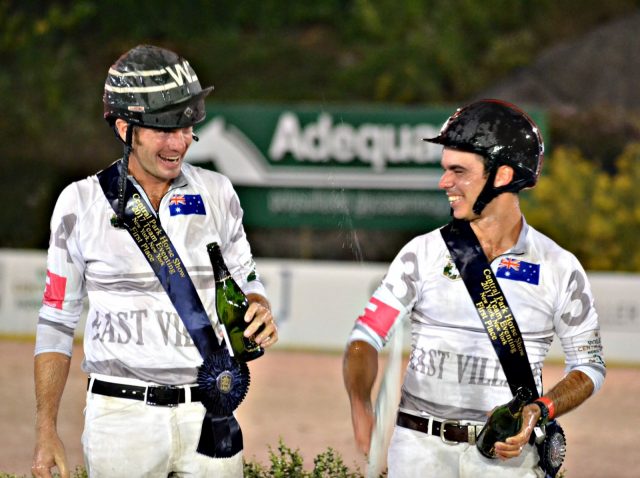 Saturday evening at the Central Park Horse Show felt like a world-on-its-head sort of night.

For one, I was wearing a skirt. I even brushed my hair and left my ratty ball cap back at the hotel room. That’s how posh this show was, and as a journalist representing our sport, I didn’t want to bring shame upon my family. We eventers clean up alright when we have to. 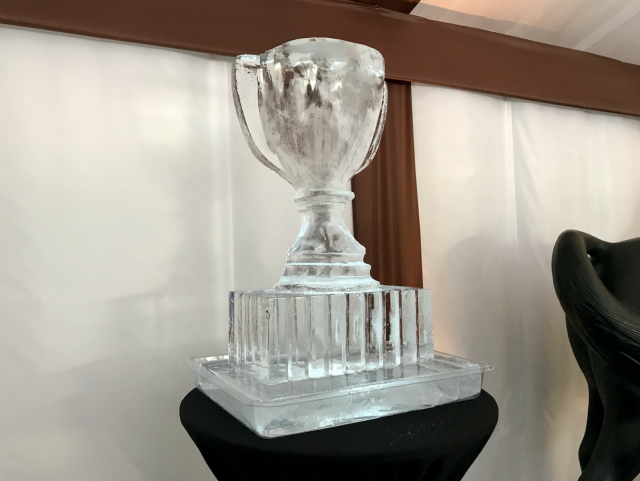 And then there was the competition itself, a never-before-seen “relay arena eventing” showcase. CPHS mastermind Mark Bellissimo and his team pulled this thing out of thin air about three weeks ago. On paper the course map for the Capt. Mark Phillips designed track, featuring a combination of showjumps and cross country obstacles to be jumped in both directions in a much-too-small arena, looked like a ball of string. Riders walked it repeatedly, their brows furrowed like Matt Damon in Good Will Hunting trying to work out an impossible mathematical equation.

Meanwhile up in the media center, my girl Mollie Bailey from the Chronicle of the Horse was busy organizing a betting pool for the journalists. Smart money was on the British imports of Team Chelsea (William Fox-Pitt and Oliver Townend), or maybe a team anchored by a proven superstar pair like Jennie Brannigan/Cambalda or riders who moonlight in Grand Prix show jumping like Marilyn Little or Doug Payne. 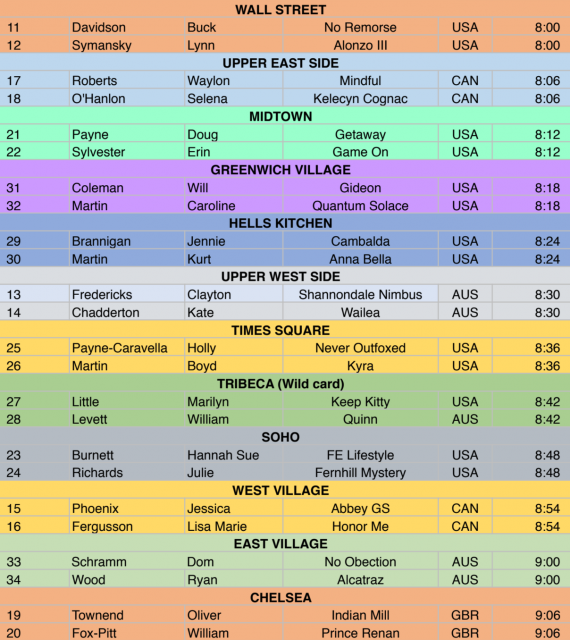 The world being a bit on its head, I put my imaginary money on the down-under duo of Ryan Wood and Dom Schramm — Australia being opposite us on the globe, or something … I don’t know … it just made sense to my brain at the time. Ryan, mounted on a two-star horse he rode in the premier arena eventing competition at Devon, seemed like a solid bet; Dom, on the other hand, was a wild card. I knew he’d been scrambling for a horse and found one in a No Objection, a 20-year-old retired three-star horse. The most he’s been up to lately is some Novice level dabbling, and Dom jumped him all of twice before bringing him to Central Park. Good to go, I guess!

The course may have been confusing but the rules, at least, were simple: jump the jumps in order, with the second rider setting off as soon as his or her partner finished. Speed was everything and rails carried a four-second penalty. After a brief intermission the top six teams would come back for a second round.

Check out this helmet cam from Chronicle TV:

Team Wall Street (Buck Davidson/Lynn Symansky) trailblazed and it became immediately clear that this was no ordinary eventing spectacle — the sold-out crowd was going completely bananas, egged on by announcer John Kyle’s riotous running commentary. The jumps were one-star height, and thank God for that, because the riders were slice-‘n’-dicing them every which way to shave seconds off the clock. Between that and the derring-do of their inside turns, my head was spinning. This was hands-down one of the most thrilling equestrian spectacles I’d ever witnessed.

Simultaneously, some eventing safety patrol alarms were sounding in my brain. Is a jump-off over fixed obstacles really that super an idea? There’s a fine line between excitement and danger, and in the wrong hands I could see a format like this crossing the line. Individual responsibility was paramount, and the onus was on the riders, nearly all of them four-star competitors, to make smart decisions out there. There was a moment when, with the announcer goading him on to go faster, I swear I think William Fox-Pitt sat up and actually slowed down, like, “Newp, not taking the bait.” Class act, that guy.

In the end, implausibly, it was the Aussies for the win! Ryan and Dom took it easy the first go-round then went for broke in the jump-off.

“Our first round we wanted to chance it but not be reckless,” Dom explained. “We didn’t want to dance with the devil in the first round. After we went back to the stables, we decided to switch up the order. Mine was a bit quicker. He was a slow starter, like a diesel, once we got started he gets quicker.”

A video is worth 10,000 words, so I’ll let these second-round videos do the talking:

Way to hang on over that cabin, Dom! And mad props to his outta nowhere horse.

“I felt kind of bad for him as we were turning and burning,” Dom said of his unlikely partner. “Halfway around I was thinking ‘Sorry mate, I wouldn’t normally ride you like this,’ but he was a champion. He was just unbelievable, just picked himself back up.”

Ryan recounted his own starstruck moment on course.

“There was a moment in the second round when the crowd was amping us up and then I looked up at the lights from the sky rise buildings and I thought, ‘Bloody hell. We are in the middle of New York City!'” he said. “It’s pretty awesome. It’s a long way from home!”

Boyd: “I was over the moon when I saw that I was partnered with Holly, as Holly always has a crack at these things whenever she’s riding. I knew that it’d either go really well or we’d bomb out,” Boyd said. “We just decided to cruise around the first round and we came back and just really decided to have a crack. We had a bit of luck on our side in the second round, and it went very well.”

Holly: “I got a little aggressive in the first round, but I think in the first round we wanted to make sure that we got through. In the second round we knew that we had to be way riskier in our inside turns and it went over really good.”

William: “This was great fun. I’m not a star at this Arena Eventing thing, but this was really well executed. I was very happy to remember the course, as I thought that jumping the same jump twice in a different direction was pushing it. But it all worked out and I’m glad that we had some nice horses.”

Oliver: “For William and I both, the biggest setback was remembering our way! We went over it again and again and again. This is just an unbelievable setting and a privilege to be here. I’m very grateful to Mark and the whole team for having us here because we’ve enjoyed this experience tremendously.”

So what’s next for the brand new frontier of “relay arena eventing”?

Mark Bellissimo weighed in after the class. “I walked around during the competition and the crowd was just really excited and engaged in this format,” he said. “Again, this is not to replace eventing, but it’s an opportunity to take passionate athletes who are very courageous and gutsy at all three disciplines and put them in the spotlight here in New York, which is one of the largest media markets in the United States.

“At the very least we want to turn this into a three-event series, like a Triple Crown of this event. I am confident that this will become the biggest money in this country for the sport, especially with our sponsors. This is something we’re very excited about.”

Congrats to all! What a night. 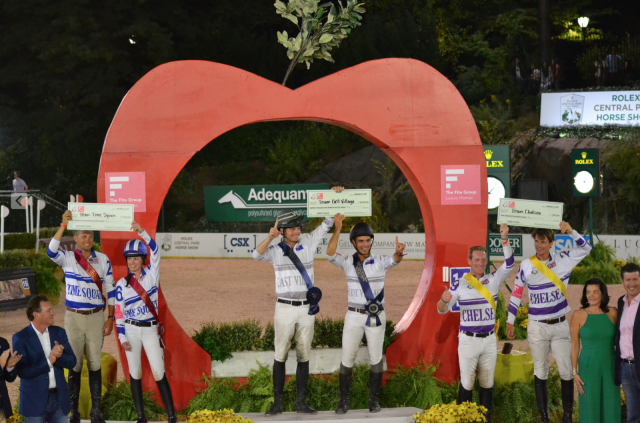 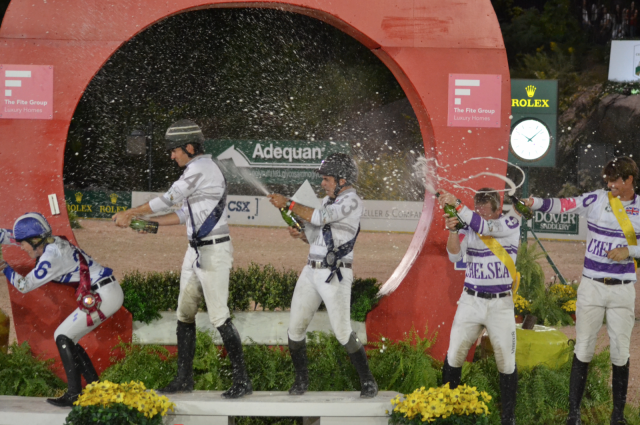 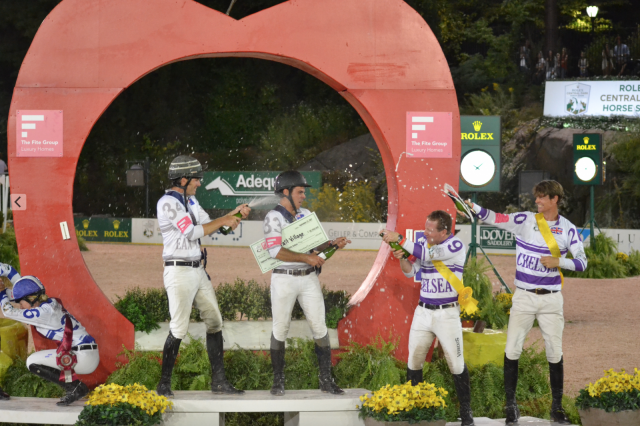