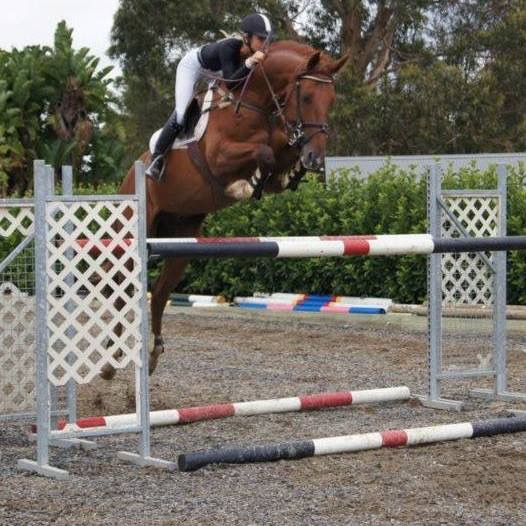 After spending six weeks in the States in 2008 working with Phillip Dutton and Boyd Martin, Lauren Balcomb knew she had to come back one day. It’s taken a few years, but she’s finally arranged the opportunity of a lifetime, moving from Australia to Pennsylvania to work for Boyd Martin and get international eventing experience.

It’s not uncommon for young Americans to move overseas to work with a top rider, but it is not so often foreign riders come to the States to train. Lauren, however, sees great educational possibilities.

“The opportunity to be based with somebody like Boyd is an incredible opportunity,” Lauren said. “There’s a lot more support in equestrian here [in America]. The events are bigger – there’s more spectators and more atmosphere.”

Lauren met Boyd when he was still living and competing in Australia. He had bred a Warmblood/Thoroughbred called Kootamootoo and competed him through the one-star level before Lauren bought him. Kootamootoo and Lauren racked up quite a few wins at the one- and two-star level and eventually went around their first three-star together.

“I spoke to Boyd a couple of months ago and inquired about the possibility of coming over, and he gave me an awesome opportunity to bring the horses. I think it’s a great experience getting international experience.”

Lauren arrived in Pennsylvania the week before the Carolina International. She spent those days settling in and getting the stables ready for the horses to return north. Luckily, she missed much of the snow and ice, but the move has not been without challenges.

“I’m still waiting for it to get warm here! The cold has been a real shock,” she said. “Coming from summer – it’s been so nice and warm there – the poor horses. Neither of them had ever seen snow. It was interesting the first couple of days to say the least. They were snorting and trying to run away. They were petrified.”

Lauren’s also been learning to drive on the opposite side of the road (in a manual car, no less) and navigating without GPS. “It’s been quite an adventure!” 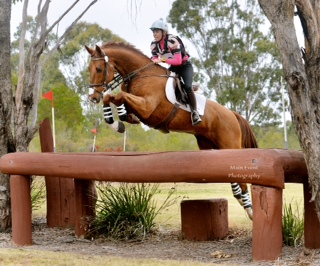 Originally from Sydney, Australia, Lauren started riding when she was 5 years old. After finishing school in 2005, she went into the equestrian industry professionally. She was named to the National A Squad in 2009 and, now 25, has experience in show jumping, dressage, and galloping racehorses.

Lauren’s top horse at the moment is called Guido Hatzis, a 12-year-old Warmblood gelding. Lauren purchased him as a show jumping stallion and they gelded him when he was 8, but not before collecting semen from him, from which Lauren has an exceptional 3-year-old.

It’s not been an easy rode with Guido, Lauren said. When she first got him, he wouldn’t go around a 95 cm course without stopping.

“Everybody told me to sack him as an eventer,” Lauren said. “I ended up just show jumping him a while then decided last year to bring him out eventing again. He went up the grades and won everything.”

Indeed, he won three of the four one-stars he entered in 2014. “He’s the kind of horse where you need to have a real rapport with him. It’s taken a long time but I think we work together really well as a team.”

Lauren jumped Guido at Boyd’s for the first time this week. The plan is to go around Preliminary at Fair Hill in April then move up to Intermediate at the next event. 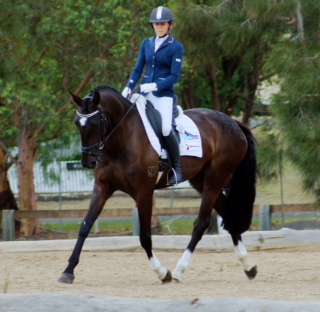 About seven years ago, Lauren and her mom, Julie Balcomb, started breeding sport horses and have developed a successful program at Lamondale Farm. “Mom had a real interest in bloodlines and wanted to produce horses for me to compete and get a bit of fun doing it. It’s something we both enjoy.”

In addition to Guido, Lauren brought Lamondale Bisou with her to Boyd’s. He’s a homebred Thoroughbred cross by Balou du Rouet and out of a Thoroughbred mare off the track. Lauren describes him as a “freaky jumper.”

She hopes to bring another homebred, Lamondale Florinia, to the States soon. She’s a beautiful 4-year-old Warmblood mare by Fürst Love out of Shirley R, a mare sired by Salute, who also sired Kootamootoo.

“I went searching for Salute mares,” Lauren said. “He has produced many top eventers in Australia and we found [Shirley R] and have been breeding with her and producing really nice horses.”

Lamondale horses are given a well-rounded education, and it is typical for them to get experience in multiple disciplines as they develop. Florinia was bred to be a dressage horse but showed an aptitude for jumping once Lauren started her about a year ago, so the direction of her career may likely change. “She’s got the most incredible jump I’ve sat on. It was a pleasant surprise.”

Back home, Lauren has several good friends helping keep the remaining horses in work, including her coach, Jenny Bennett, and friend Sean Dillon. When asked if she’s planning to follow in the footsteps of another pair of Australians who now make their home in and ride for the States, Lauren chuckled.

She’d like to stay for at least a year-and-a-half, she said, but has the ability to stay for five years per her visa. “It’s open-ended. We’ll see how it goes.”

Please join us in extending a warm EN welcome to Lauren! We wish her the best of luck in her Stateside adventure and look forward to seeing her at events with the Windurra team.