The 2028 U.S. Eventing Team is already out there somewhere, and it’s up to us all to nurture their talent and their big dreams. “2028 Olympic Talent Watch” is an (adorable) new series in which we identify junior eventers who are already exhibiting the heart and the guts to lead American eventing to glory in the (distant) future. Any short-stirrup riders you know come to mind? Email us their story at [email protected] This week’s edition features Sophie Stolley, age 9, of Richmond Hill, Georgia, nominated by Abbie Jones! 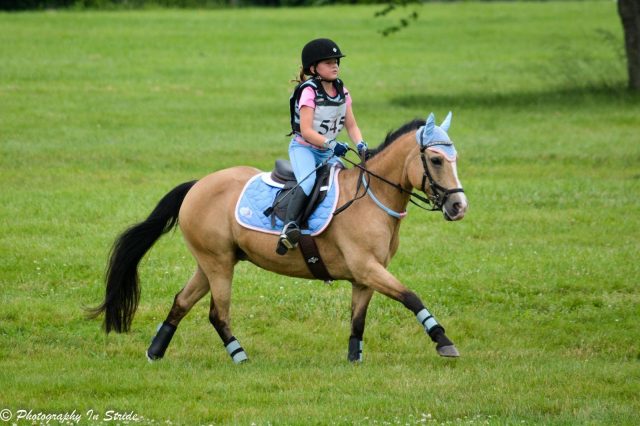 Photo by Photography In Stride.

I couldn’t pass up the opportunity to be a cheerleader for a kid that is on a mission. We all know the story of the horse crazy kid with big dreams. Well I’ve had the privilege to see this taking shape in Sophie Stolley.

When I asked her, “When did you start riding?” and she said, “Well, I did a recognized horse trial before I was born,” I had to chuckle. I guess she’s correct: Her Mom Briana Stolley competed at Middleburg Horse Trials in Virginia when she was three months pregnant with Sophie. So I’m not sure Sophie had a choice about horses, but from my perspective, she was just born with the horse gene.

Starting with her first pony at 3 years old, wearing pigtails and ribbons, doing lead line with her dad at the Devon Horse Show, you couldn’t deny the path she was headed down. But I think her true growth and dedication to become a competitive rider has taken place right before my eyes in the last two years. 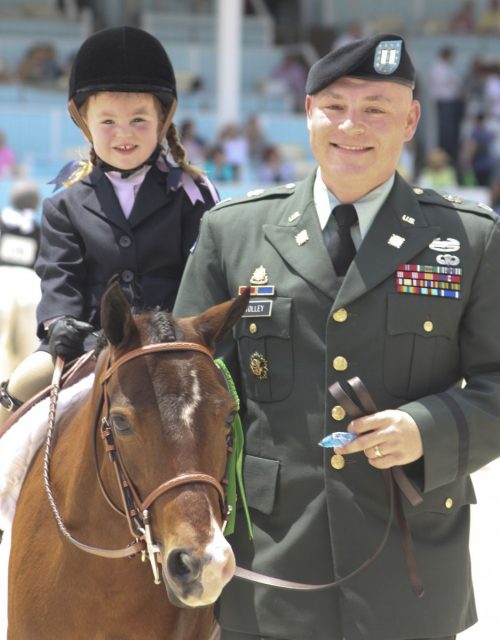 Sophie is an Army kid, so she’s moved around a lot, but since moving to Richmond Hill, Georgia, in the summer of 2015 at 7 years old, I’ve watched her go from barely able to keep her pony Honey Bee in the canter to accomplishing great things in a short amount of time for a kid her age.

Richmond Hill is not known for its horse resources, so Sophie’s mom took on the monumental challenge of starting and becoming the District Commissioner of the Ogeechee River Pony Club (ORPC) so that Sophie and other area kids could come together to learn all aspects of riding and horse care, as well as have opportunities to work with various trainers and other pony clubs to develop their skills.

As witness to Sophie’s growth, I have no doubt that participating in Pony Club, along with her mom’s dedication to providing her great instruction, has helped transform her into a young rider that has high aspirations and is serious about her sport.

Sophie’s ultimate goal is to ride at the Olympic level, but she commented that her 10-year plan is to compete at the Preliminary level, obtain her Pony Club “A” rating and probably get another pony or maybe even a horse.

Most recently, Sophie and Honey’s biggest accomplishment was competing at their first major horse trials in the Starter Division at none other than May Daze at the Kentucky Horse Park. With a score of 34, she was fourth after dressage and rode a clear in stadium to move up to third. An unfortunate nervous runout on cross country saw her finish in 10th place. Not bad for a 9-year-old kid in a huge division of much older, more experienced competitors!

However, what is so special is to see this kid with her game face on. She’s determined, brave, has heart, loves her pony and just like that young horse who makes it around his first cross country course, you could see her confidence grow and you can tell she has become a true eventer. I can’t wait to watch her journey.