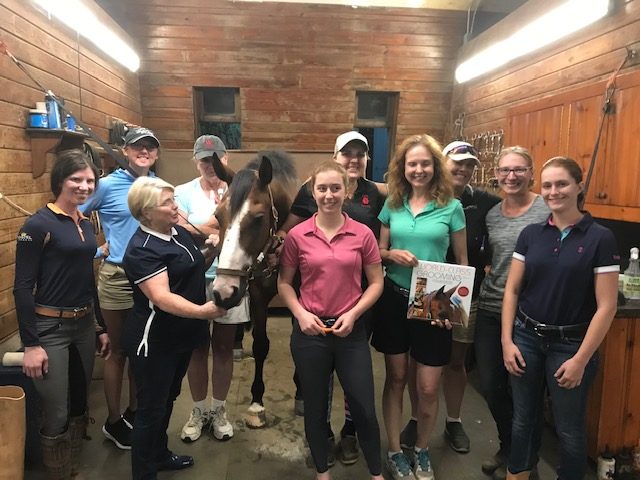 What we bring to the barn in the mornings affects our horses. If we bring love and compassion to the barn as we hear greetings of nickers and inquisitive heads popping over stall doors, our horses will reflect our positive emotions and energy. Recently, I participated in a clinic that made this idea a reality.

Last summer, a friend encouraged me to sign up for the World Class Grooming clinic series with Emma Ford at Phillip Dutton’s farm in Pennsylvania. I have always been someone who wants to learn. Growing up, I loved school, riding lessons, and reading whatever I could about my interests. Today, I still thrive on learning. Even if I get a small tidbit of information from someone, I hold it dearly. It is part of who I am. Even if you don’t learn something that you’ll use in life, you may learn what you don’t want to do.

I have always chosen jobs in the horse industry where I thought I would learn something. In college, I worked at several different barns because I felt like I would see how people manage their barns differently and learn by leaps and bounds — and I did! I sat in a dressage saddle for the first time, learned how to clean 20 stalls efficiently each evening, and how to look after older, loved school horses.

After college, I chose to be a working student because I felt like I would see so many things while traveling the winter circuit with the professional and his farm. Since then, I’ve worked for a dressage professional and have taught and coached at a boarding school. Today, I spend my days grooming for an event rider and working in a tack store, where I continue to expand my knowledge in an encouraging and supportive environment.

Choosing to sign up for the clinic with Emma was the best decision I’ve made in recent years. In fact, I think it might be the most important clinic I’ve ever participated in as well because of the main messages that were shared and demonstrated throughout the four sessions of the clinic.

During our first session, Emma opened with a question — “What is compassion?” — which led to the question of “What is Respect?” This then led to a discussion of the importance of energy and awareness in the barn. There were no right or wrong answers — everyone had important ideas and reasons. These three key elements were not only discussed, but thoroughly demonstrated by both Emma and all the participants throughout the month of clinic sessions. I was blown away as I had never openly seen this in the horse world.

As a group, we all discussed the importance of compassion and respect. Whatever happens at the top of the barn’s structure trickles down from the professional to the barn manager to the working students, etc. Not only does it affect people, but the horses are affected by how we treat each other and ourselves as well. As a groom, it’s my job to look after the horses in my barn. I want them to be happy, healthy and in a good mindset. If I’m sour or have had an argument outside of the barn, I cannot bring it with me. It’s important to learn how to leave the negative feelings at the barn door or far away from the farm if possible. This was something we discussed in length. This brings about a tricky concept: the idea of being aware of oneself.

To be aware of oneself means to know what you are feeling or what you’re bringing to the barn every day. Emma discussed that there might be days where you don’t accomplish everything you’d like because of how your day is going. That’s OK. To me, this means that sometimes, a plan for your ride might alter depending on the energy of you or your horse. If you’ve had a hard week, maybe it’s best to not have an intense ride focused on flatwork if it won’t be as productive as it could be on a better day. If you need to step out of the barn and have some quiet time, that’s acceptable as well. Do whatever is necessary to regroup and re-enter the barn with more positive emotions, so that staff members and horses will be affected in a positive way.

Throughout the clinic, Emma and the participants demonstrated respect. We, the participants, came from a myriad of backgrounds. There were event grooms and barn managers, amateur show hunter riders, Pony Club students, and some parents who wanted to learn more tidbits of knowledge, ranging from when to use which kind of studs to tips and tricks when grooming. Regardless of who we were or who we worked for, we were all treated equally. Emma treated us all with kindness and respect. We, the participants, all worked together as well — there was never any disrespect toward any other participant and any questions could be asked and discussed without judgment.

After college, I took a job as a working student for a hunter/ jumper professional in Virginia. I was “green” to the world of A/AA horse shows, especially to being part of the winter show circuit. At the time, I viewed the horse world as being sat upon a high pedestal — it was something bright and shiny! Quickly, I realized that I may have been there to learn, but the professional and their staff members were not there to teach me. Overall, I was treated as if I was the scum of the Earth. It trickled from the top down and left me feeling like I was not meant for the horse world. There was not respect in that barn.

When Emma discussed the importance of respect, I was astounded that a top barn manager would emphasize it. It gave me hope that people, such as Emma and Cat Hill, or World Class Grooming, could create some change in the equine industry by discussing such importance topics, but also by demonstrating them.

On this same day, we were taught about button braids. By growing up in the hunter world and not coming from a wealthy background, I can braid tightly down and pull the braids up for a neat hunter braid; however, creating a button braid from my tight braid was a different story. Luckily, as Emma was only one person in a large group, another participant helped me create a button braid until Emma could make it back to where we were practicing. With that, I helped another participant figure out how to braid tightly enough to be able to create a tidy button. This seemed to be the theme of most of the clinic — respect and compassion for each other and the horses.

Similarly, we spent some time on wrapping and boots. In a Socratic circle of sorts, we discussed and passed around various boots and wraps. I have pages and pages of notes written from this session. I had no idea what a strike guard was in a cross country boot before this session, but now I understand that we want them to be flexible because they disperse the energy when they receive impact.

We were all given a chance to practice putting boots and wraps on a very patient horse. Emma allowed us to wrap as we normally would and critiqued, but in a positive manner. If people were not used to wrapping, they were given a chance and given guidance throughout the process. As I’ve worked in the horse world, it seems like everyone has a slightly different way of doing things, but if the basic, safe principles are followed, it’s OK. Just because it’s different doesn’t mean it’s wrong. To me, the clinic sessions and Emma followed this idea.

A few weeks ago, someone made a comment that they would never want their daughter to be a groom for someone like I was. That made me think, why not? What is wrong with being a caring and loving groom to a barn full of happy horses? Every morning, I wake up and know that there are horses waiting on me and they greet me each in their own way.

I have seen and heard so many stories of people who are treated badly by professionals and Big Name Trainers because they believe it’s OK if that professional has that reputation. People pay to be in clinics where they’re torn apart. There is a difference between people who push you because they care and know you can grow, versus the people who belittle you because they can. At this point in my life, I am happily with a supportive professional where I can grow and learn — where compassion, respect, and awareness are part of daily life.

Throughout the clinic, we learned many things. We practiced taking the temperature, pulse and respiration (TPR) on a variety of horses in the barn, including Mighty Nice, who won Olympic bronze with Phillip Dutton, but also discussed the importance of using more natural products with the horses, such as coconut oil and witch hazel. Not only did Emma share her wisdom, but we also discussed our own remedies as a group. There was so much knowledge in the barn during these clinic sessions. Personally, I went home and put witch hazel into a spray bottle for the barn.

What I truly appreciated was the fact that I had a few questions arise where I worked while I was involved in the sessions — and I was able to ask Emma for her expert advice. Not only did she find answers for me, but everyone could ask questions to further their understanding. I never felt like I didn’t belong, even though I didn’t have an eventing background.

The World Class Grooming Clinic taught many things, ranging from the care of the horse to taking care of tack to cooling out horses after they’ve galloped cross country, but I think that this clinic is changing the horse world, one session at a time, through discussing and demonstrating the ideas of compassion, respect and awareness. Without these, the industry will not change, and younger generations need to be inspired to continue in the footsteps of older generations of horsemen and women. The horses and humans are worth it.

Learn more about World Class Grooming at their website here.