We recently selected a few bloggers to try out a 30 day supply of Omega Alpha’s popular joint supplement, Sinew-X. These bloggers have received their supply and will be starting their horses on a 30 day regimen, all while blogging about their observations and results! We can’t wait to see how their horses take to the supplement, and we hope you enjoy following along! We caught up with Alison Kennedy and Good Time Contessa, a 12-year-old Appendix Quarter Horse. 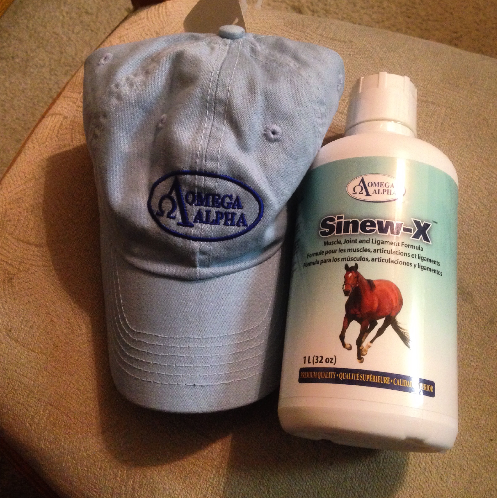 I love the idea of Sinew-X: an easily-absorbed liquid formula that costs about $1 a day. I appreciate the practicality of the liquid formula, and the cost-effectiveness of the overall supplement. When I got the bottle, I made sure to read the instructions carefully, as I’ve been used to SmartPak supplements. This is my first experience with an Omega Alpha supplement, and I wanted to make sure Tess received the correct dosage.

I’m certainly glad I checked! The bottle gave very specific directions about dosage. 30mL twice a day for the first 7-10 days as a loading dose, then 30mL once a day after that. Sounds easy enough. I did have a bit of trouble when I tried to figure out how to measure the supplement out.

Every powder or pellet supplement I have had in the past has come with a scoop. Nothing that I read on the bottle indicated how I was supposed to measure the liquid supplement out.

My solution was to buy a 35mL syringe from my local Tractor Supply and leave it in the feed room with a very descriptive note. Fortunately, as I was in the process of leaving everything for the barn manager, my trainer, who has previous experience with Omega Alpha supplements, told me that the cap of the bottle acts as a measuring cup.

Even though the cap is not labeled with any markings indicating that a full cap is 30mL, I measured it out in my syringe, and sure enough, 30mL! That makes things much easier for whoever is feeding. I was worried about getting the liquid into the syringe once most of it was gone! 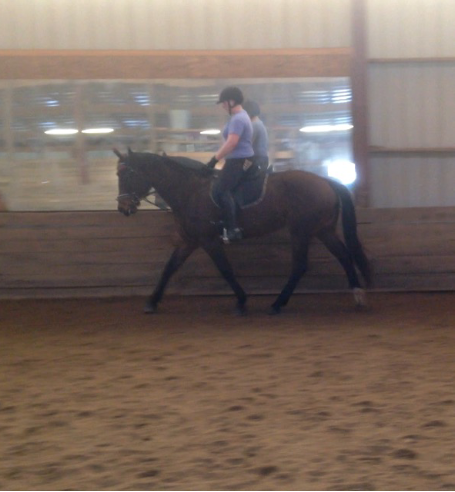 So pleased with our progress!

Other than that initial hiccup, I’m very happy with the supplement so far. Tess has no problems eating it — I’m pretty sure she doesn’t even notice! I’m definitely lucky that she isn’t a picky eater at all.

Before starting the Sinew-X challenge, I took Tess off her other supplement in order to start with a clean slate. During those couple of weeks, she felt a little stiff when I first got on and starting warming her up. Because she is kept on full-time turnout, her joints don’t ever have a chance to really stiffen up, but I noticed that for the first lap or so, she needed to really stretch.

I didn’t see any difference immediately, but after about a week and a half, I realized that she didn’t feel stiff during those first couple of laps anymore. She seemed much happier to be working right off the bat, and I know she was moving better. Part of this may have been that anyone is stiff in the incredible cold we had this winter in Ohio, but I feel like the supplement had a lot to do with it. Getting the extra support to her joints certainly can’t have hurt!

The past few weeks have brought a lot of progress in our lessons! We’ve made some breakthroughs when it comes to contact, and I’m really learning to sit up and down into my tack instead of perching. Show season is on the horizon. I don’t know about you guys, but I’ve already started planning (and budgeting!) for the coming spring and summer. We’ve got a couple of local dressage shows on the radar, and the hunter pace series and combined series set for summer. Bring on show season!

We recently selected a few bloggers to try out a 30 day supply of Omega Alpha’s popular joint supplement, Sinew-X. These bloggers have received their supply and will be starting their horses on a 30 day regimen, all while blogging about their observations and results! We can’t wait to see how their horses take to the supplement, and we hope you enjoy following along! Check back this coming week for introductory blogs from all of our writers! 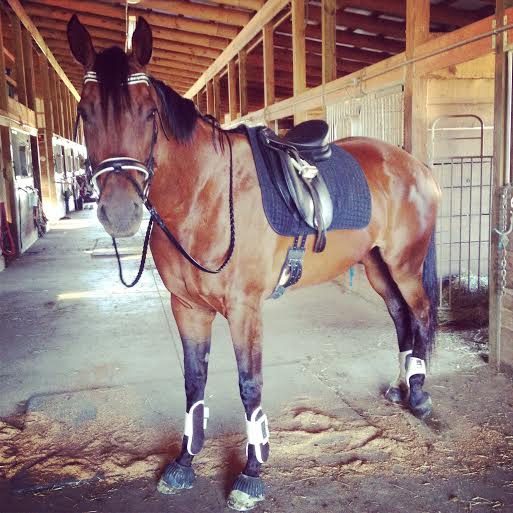 My mare, Tess, and I are adventuring into our first real eventing season, with the hopes of entering a recognized Beginner Novice event by 2016. I am a 24 year old graduate student, working on my Masters in Library Science.

Good Time Contessa, or Tess, is a 12-year-old registered Appendix Quarter Horse mare. We came to eventing together from very different worlds — I grew up in the hunter/jumper arena in Atlanta, and Tess is a former Quarter Horse circuit hunter-under-saddle and showmanship horse.

This, of course, means that we have a ton to work on! Dressage is certainly the weakest phase for both of us, but we’re in dressage boot camp right now. We’ve made a ton of progress already, and I’m excited to come out swinging in the spring.

I first met Tess when I started volunteering with a local 4-H club in the summer of 2012. A friend of mine grew up in the club and got me involved, particularly during fair season. One of the club advisor’s daughters was aging out of 4-H and had become less interested in riding frequently. She ended up offering me the ride on her mare, Tess.

I took her on one trail ride, and then ended up taking her on a hunter pace the next day. For a horse who I was told was “spooky” and horrible on trails, she did absolutely amazing. She jumped everything I pointed her at and only hesitated once at, what I admit, was quite a large ditch.

Fast forward to summer of 2013. I rode Tess all year, and I knew we had something special going on. I dropped hints to her owners that I wanted to buy her. After some convincing, they agreed, and in September of 2013, she became mine! 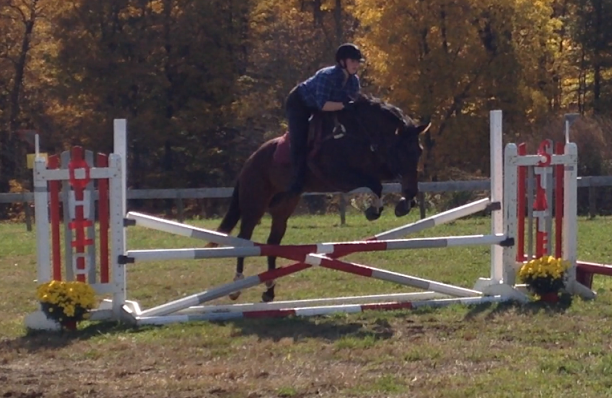 Of course, she also promptly got hurt. A month after bringing her home, she came in from the field with a pretty significant gash on her side (think Jenni Autry’s Frankenhorse, but less dramatic). We dealt with that injury, only for her to wrench a fetlock coming out of the winter.

Summer of 2014 rolled around, and we were back in business. In June, I made the decision to move her to Lost Creek Equestrian to ride with bronze and silver medalist Renee Peters.

Tess lives out in a field with a couple of other horses, which is super for her mental health and for keeping the slight swelling down in the fetlock she injured. We spent the summer and fall cleaning up at the local hunt club’s hunter pace series, ending the year as fast division series champions.

Now that winter has set in, we’re in dressage mode full time. I’m learning how to be less of a “hunter princess” and more of a “dressage queen”, and Tess is figuring out that contact actually means steady communication, not “I’m bumping your mouth, put your head down.” It’s amazing the progress that can be made with weekly lessons and a lot of hard work.

I can’t wait to get Tess started on Omega Alpha’s Sinew-X. Since she was started young, as so many circuit Quarter Horses are, Tess has already developed some arthritis in her front legs.

Even though she is only 12 and did not do much work for most of her life, I want to be really proactive about keeping her joints healthy. I really appreciate Omega Alpha’s all natural formula for their joint supplements, and I think that the more readily absorbed formula they use will be a good option for her overall joint health.

I’m curious to see how she likes the liquid supplement, as I’ve never had her on anything like it before. It probably won’t be a problem, as this is the horse who happily eats Bute powder!