“Remember, behind every Olympian is a village of supporters who helped get them to this point, and you are one of them!” — Jessica Phoenix

I attended the Rio Olympics send-off party for Jessica Phoenix at the Wilfred Community Centre in Ontario. Jessie greeted me warmly at the door. People are still busy setting up items for the silent auction. Many members of Jessie’s family are here along with a core group of long-time supporters and I am one of them.

The first send-off party I attended was in 2007. Jess was going to Rio that time, too. She was riding for Canada at the Pan Am Games with Exploring. Back then there was no Eventing Nation to provide minute-to-minute coverage of the event. Jess promised to post a blog of what she was doing. I remember a few blog entries after she got there and then she was busy competing. I was hungry for information. It is amazing how much technology has changed in just nine years.

This time, part of the silent auction was held online for people to bid if they couldn’t be there in person. Jessica also used a GoFundMe account to help raise funds for her trip to Rio. 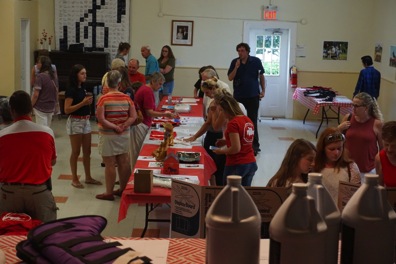 There is a great feeling of community in the room. There are great-grandparents and great-grandchildren here. Everyone is excited for Jess and A Little Romance, better known as Blue.

Jessica introduces me to Blue’s breeder and owner, Anita Leschied. Anita and I have something in common because I also own an offspring of Blue’s sire, A Fine Romance. Anita has driven five hours to attend the party. She is a lovely woman and she tells me about Blue as a filly.

“She ran around and whinnied a lot,” she says. “We never imagined she would be going to the Olympics.”

Sadly, A Fine Romance passed away in June at the age of 25. I feel his presence in the room because his breeder/owner, Gail Parker Rogers, has donated a breeding dose to the silent auction. It is exciting that a locally-bred Canadian horse is representing Canada. In fact, both horse and rider were born in the province of Ontario.

Anita tells me she had jewelry made from the tail hairs of Blue’s dam and sire. One piece of jewellery attaches to Blue’s halter. It is very touching to think that Blue’s parents are accompanying her on her journey to the Olympics. Jessica also has a bracelet to wear.

Blue is not a tall horse but neither is Jessica. At 15.2 and 5’4” respectively, they are both courageous powerhouses. When I first meet Blue several years ago she reminded me of Exponential, Jessie’s mount at the 2012 London Olympics. There was something in common about their expressions, that “look of eagles” that makes a top competitor.

Jessica has that look too. She has a fierce focus on her goal to be a representative of Canada in the sport of eventing. I should know. I was a student of hers for several years. Any time I expressed doubt that I could not do an exercise, I got that look — the look that says “you can do this” and I did it.

I have made bids on several items but I have to go before the silent auction is finished. Before I leave, Jessie signs a photo of her and Blue leaping over a huge table jump. 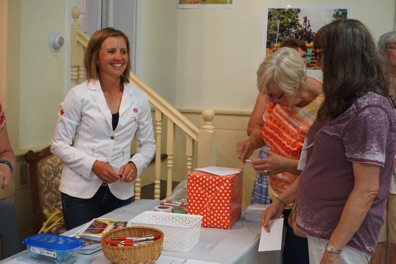 I proudly take the photo home. I am going to put it in the barn in front of Foxy’s stall. I can already hear myself bragging: “This is Foxy’s little sister with my coach Jessica Phoenix on their way to the Rio Olympics”. 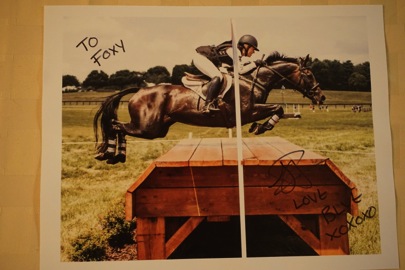 I won’t be going to the Olympics as a rider but it sure is fun supporting one.