So, by now, we all know that Rency has his quirks. He has weird habits, as we all do. In my last post, I talked about the baby moments that I get to deal with every day. Some of those are harmless, like when baby horse catches a case of the zoomies and needs to run it off. But some of those things, like fighting against pressure or bucking, are issues of respect. Now, before I go into that, I want to make sure I’m clear on exactly what I’m talking about here. A lot of people in the horse world seem to confuse “respect” with “obedience.” A lot of horses out there are obedient, but they sure aren’t respectful of their human companions. If you ask them for something, they’ll do it, but not because they want to. Usually, it’s because they’ve seen consequences for not doing what they’re asked for, and they’ll have a little attitude the whole time. 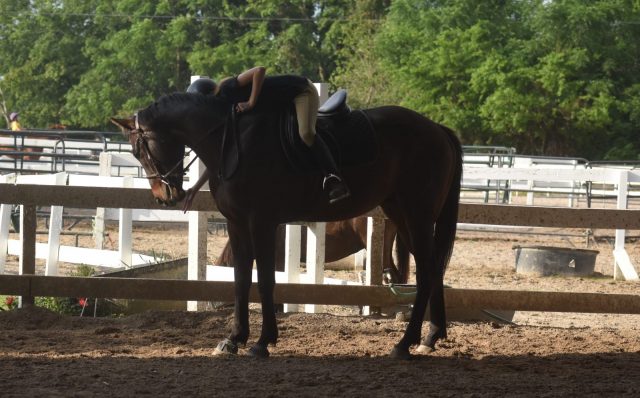 My horse is very respectful, but he doesn’t always do exactly what I want. He’ll say, “no, thank you, mom,” and there’s usually a pretty good reason for that answer. Nine out of ten times, it’s because I didn’t tell him my plan in enough detail, or it’s because he’s afraid. When he says no, it isn’t with pinned ears and swishing tail, it’s with confused eyes and an anxious mind. I’ve taught him that I won’t punish him if he politely says no to me, but if that is your answer, we’ll find something else to do that’s a bit more work. After we do that, I give him to option to do what I originally asked for. If the answer is still no, we go back and repeat. Now, if he ever says no in a way that’s rude, well… I’ll go into that a little later on.

Groundwork is the foundation for everything. It’s how I taught my horse how to respect me; it’s how I teach him new skills; it’s my starting point for everything. If they won’t do it on the ground, they probably won’t do it under saddle. Before Rency, I thought that lunging was just what you did when you either didn’t feel like riding or when your horse was feeling fresh and needed a good run. However, when I got Ren, he knew nothing about what we wanted from him. It was too early for us to try to get on and teach him under saddle, so we had to do everything on the ground. Every lesson you teach while on the ground doubles as a trust builder and teamwork exercise between you and the horse. You’re teaching so much more than just how to canter in a circle. 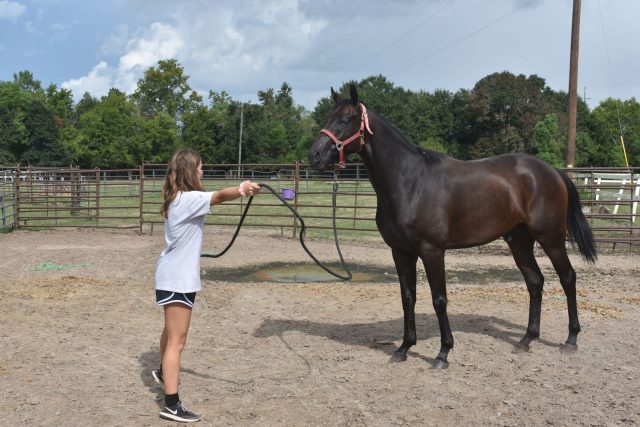 Baby horse looking very confused during his first ever training session. It took two people to teach him to lunge; one standing with the line and one holding his halter and leading him. Photo by Ivy Maron.

For example, Rency’s first lesson on the ground was how to lead. This taught him how to match mine and my sister’s pace, sure, but it mostly taught him that we are his leaders, and we deserve respect. He goes where we go, and he can’t just decide to take control and pull away from us. That skill built on to include yielding his hind end, moving his feet, and joining up. From there, we went to focus work. This was how we taught him to keep his mind on his humans and to always show us his front end; two eyes and two ears. When Rency’s thoughts would drift, and he started to walk away, whoever had the lead rope suddenly decided that they want to change directions. We weren’t pulling on him, and we really weren’t asking for anything either. He just wasn’t paying attention, and he got a little tug as a result. Under saddle, I can say that these two exercises specifically deserve the credit for 80% of Rency’s progress. Not because he is so good at walking or staring at us, but because he learned that he needs to give us the respect and attention that we deserve.

In return for being respectful, Rency gets less pressure and more understanding when he is hesitant. He always has options, and he knows that. Like I said earlier, if he politely says “no thank you,” I say “okay” and we immediately move on to something else that requires more effort. I should note here that I only ever have to utilize this method when he is spooked by something. Normally he says no thank you to places, not activities. In these cases, he has the option to rest in the scary place or work in the safe place. It’s always his choice, but we don’t go inside unless I get him to venture into the scary place just a little. That’s if he says no nicely. 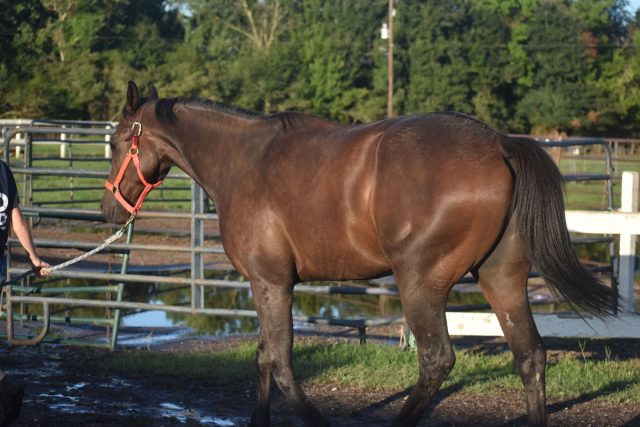 Rency learns how to lead quietly in the early months of his training. Photo by Ivy Maron.

If Rency is rude, which isn’t often, and is kicking, pinning his ears, biting, etc., we use a different method. When he shows even the slightest bit of disrespect towards me, I never raise a hand towards him, but I immediately nip it in the bud by moving his feet. This is one of the first things we did with him to establish respect, so I go right back to it when I feel we lack in that department. When you control the horse’s feet, you control their body and therefore their mind.

I have different ways of getting Rency’s feet moving on the ground vs. under saddle. On the ground, I’ll usually back him up or step towards the hind end and get him to yield. Under saddle, though, I actually prefer to send him forward. I don’t like to give horses the idea that backing up or standing still is an option for avoiding work when they have a rider. Once we’re moving, we’ll do small circles similar to hind-yielding or some sort of focus exercise, but I’ll admit that I seldom have to do that. His biggest issue has been bucking as a way to protest his workload, and at that point, he’s already moving so I’ll just keep working. Bad behavior doesn’t earn him a break, so we work until he is nicer.

Now, it goes without saying that I didn’t invent these tricks. I did a lot of research, and all of my favorite training methods come from Warwick Schiller. However, every horse is different, so I’ve tweaked a few things here and there to better suit Rency. Teaching respect on the ground has completely changed our relationship, and I recommend it to anyone who has a young horse. When it came to our last off-property outing a couple of weeks ago, our focus work kept us spook free and happy all day long. With that successful day behind us, we’re looking forward to a big off-property show in less than a month! Needless to say, I’ll be writing about that in excruciating detail… Stay tuned people.

Visit Jumper Nation to read more about Emily’s lead up to the Thoroughbred Makeover.