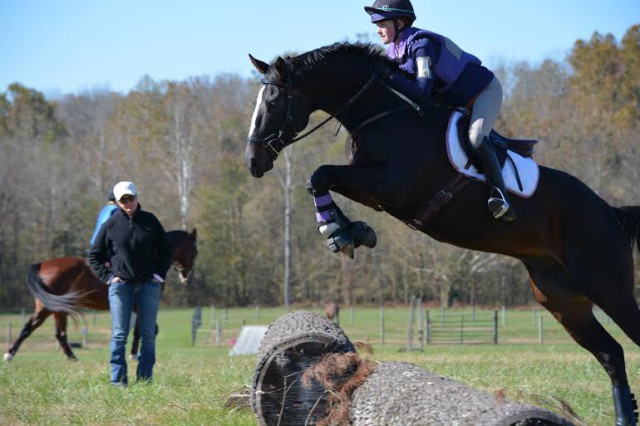 Amp and I at a Karen O'Connor Clinic in Long Shadows Farm in Campobello, SC. Photo by Amy Thomas.

Let’s flash back about a year and a half. It’s New Year’s Day 2014, and I have a 7-year-old OTTB gelding in our trailer coming back to our boarding facility in Greenville, South Carolina for a week trial. My 14-year-old self is absolutely ecstatic at the thought of possibly owning my first horse.

We did end up buying “Gambling Man,” who was affectionately called “Amp” and came off the track sometime in the summer of 2012. When I met him, he had completed two or three Beginner Novice horse trials and qualified for AECs with a dressage rider turned eventer. He was possibly the grumpiest, angriest, most opinionated animal I had ever sat on, but he had a good brain. We thought it was a good idea at the time.

The first few months were pretty good. He didn’t know much about connection in the dressage yet, but he had a heart of gold and took me over every fence I pointed him at. My confidence skyrocketed.

After finishing 10th out of 12 in our first Beginner Novice at FENCE in April of that year, we decided it was time to work on the dressage. Of course we were under the guidance of my wonderful and experienced trainer at least once a week, but Amp started to become sour and opposed to any work at all.

This slowly worsened, and of course as a teenager it made me insanely frustrated. I had days when my rides would end twenty minutes early because I couldn’t get Amp to understand what I was asking, and I would get angry.

Our relationship was discombobulated and I felt that my new partner hated having me on his back. After having him diagnosed and treated for right dorsal colitis in May, we thought his attitude would change since he was ulcer-free. Boy, were we wrong.

Instead of becoming less grumpy, he retained his grumpiness and became more “amped up.” His bucks became a little bigger, he gave me his first ever rear (which put me in the dirt for the first time in six months), and he even tried rolling with me on him a few times.

I boiled under the skin when I watched all my friends having success on their older and educated mounts. More times than I can count, I remember wishing I hadn’t bought Amp, but instead a horse who knew what he was doing.

The only reason he stayed around was because he most of the time always did his job safely. Once, he even managed to get a third place ribbon in the Junior Novice at Poplar Place. But even after fulfilling my goals of “being successful,” I still felt something missing.

Early in 2015, things started to crumble again. Even though both of us were a lot more educated by this time, I still felt removed from him. His angry bucks and horrid temperament under saddle left me in tears a few times. 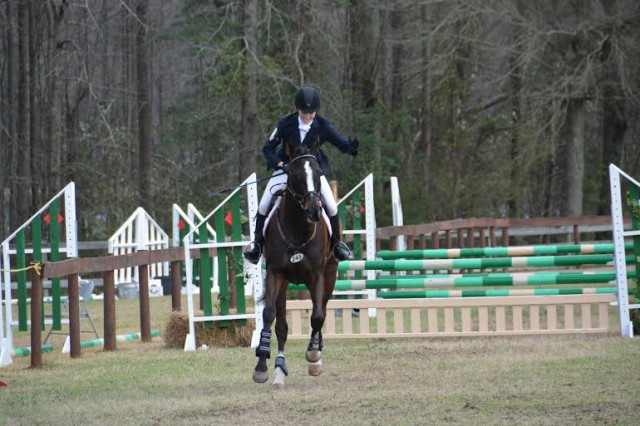 After our stadium round at Pine Top. Photo by Amanda Fisher.

After struggling with the idea of parting ways with Amp, a friend approached me with a word of advice that I will never forget. She said, “If he makes you happy, don’t let him go.” When I first thought about it, I of course said, no, this horse makes me angry, upset, and stressed out.

But upon rethinking the statement, I realized that the very thing that frustrated me was my source of joy. Every few steps we got where he was receptive to my juvenile aids, every time he sailed two feet over an already 3’3” fence, every little victory — it gave me satisfaction.

I realized that every day I sat in school in anticipation of seeing him, and it was just about the only thing I ever looked forward to. I had been letting the bad overshadow that, and in return, my whole mindset was negative.

So after I figured this out, everything clicked, right? No, of course not. But slowly, over time, I realized that my horse was still green and needed my correct and patient guidance. I made it my goal to learn how to ride effectively and correctly.

I watched many more experienced, older girls in my Pony Club ride, and sometimes they would even let me get on their horses to feel how to correctly use my aids. Their encouragement and friendship was vital to my success.

Instead of setting so many long term, concrete goals, I focused on accomplishing small things like getting Amp to trot around the arena a few times without ever pinning his ears.

Instead of using my whip whenever he bucked, I smiled and said “Buddy, that’s not the right response to me putting my leg on!” Instead of letting my frustration pile on and turn into impatient anger, I took deep breaths, rubbed his neck every time he gave any sort of submission to my aids, and spoke the words “Good boy!” until he learned to love my voice.

Our scores still don’t reflect how hard we’ve been working, but I know we’ll get there. He recently galloped around Pine Top and FENCE and thought the Novice jumps were totally boring.

He’s found his footwork while schooling some Training level water combinations that neither he or I have any experience with. But most importantly, I finally feel at home looking between his ears, and I think he enjoys having me there.

It’s all about your mindset. I changed the way I thought while I rode and that changed the way he accepted me. My impatience turned to patience, my frustration into pleasure, my tears into laughter, my tension into softness. Amp responds to my riding in a completely different way. My only regret is that it took me a year to realize this.

In the end, I promise that the challenge, no matter how difficult, always pays off.

Whether you succeed or fail, it teaches you life lessons. I learned how to handle defeat with grace and how to stay calm and smiling in a discouraging situation. Our weekly gallops through the woods are now therapeutic instead of distressing, and our partnership is stronger than ever.

Don’t ever give up on something that makes you happy.