How do we build a more diverse, inclusive and accessible sport? In the coming weeks we will explore this question alongside many of the 27 Scholarship recipients as they share with us their essays in full. Collectively, their perspectives coalesce into a body of work that will no doubt help inform a viable path forward for equestrian sport, and we are committed to connecting their actionable ideas with the public as well as leaders and stakeholders of the sport. 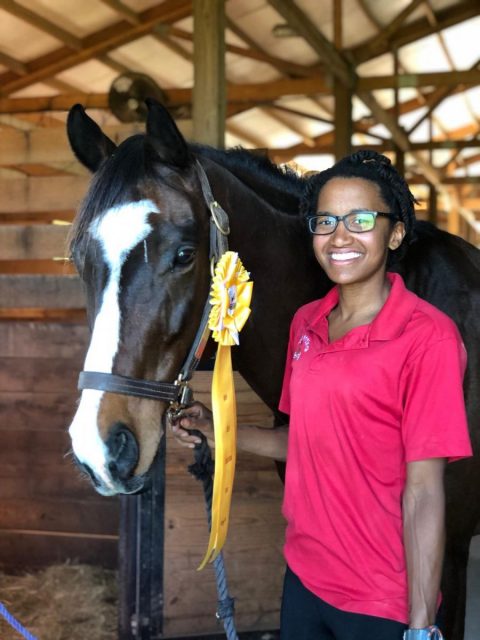 I have never met another Black eventer in person. Never. For that matter, I rarely see other riders who are people of color. A young friend of mine asked me once if I felt weird, being the only Black person surrounded by white riders, their white grooms, and their white families. I remember how I hesitated in my answer. Does it feel strange? How could it? It’s the only state demands being I have ever known. Being the token Black person is my normal; it’s the toll this sport requires of me.

No, I told my friend. It’s not strange. But I’m aware of it, hyper-aware. On the rare occasions I’ve seen another person of color on the showgrounds, I’m always a bit shocked, startled out of a white haze.

The racism I’ve experienced as a rider would mainly be classified as micro-aggressions. Perhaps even purely ignorance. People ask me about my hair, no matter whether it’s in its Afro or in braids. How does it fit under my helmet? How do I keep it clean? A middle-aged white man assured me that, when he was young, his hair was even curlier than mine, as if my coils are something I’ll grow out of. People ask me if I burn in the sun, if I use sunscreen. They say if they get much more sun they’ll be as dark as me. They complain about how pale they are and say I’m lucky to already be perfectly tan.

I find it exhausting, that everyone is so comfortable and feels so entitled in discussing my body as if it were a novelty.

But I don’t get to be impatient or irritated. I may be the only Black equestrian these people see, and so, like it or not, I carry my entire race on my shoulders. The white riders don’t have to do that. They don’t have to think, “Let me represent my race well!” before riding into a ring or interacting with a stranger.

I was hosing my horse, Dan, after my dressage test at a horse show when a Black mom and her seven or eight-year-old daughter saw me and timidly came over to ask if they could pet Dan. I leapt at the chance to talk to them. The mom told me she had always been curious about horses but had never touched one. She lived nearby, heard about the horse show, and had come to watch.

There were probably two hundred horses and riders on the property at that moment, but she chose to stop and talk to me. I think it’s obvious why. In a sea of whiteness, she found someone familiar, someone safe, someone like her.

Mom and daughter were both smiling when they left. I encourage everyone, but especially people of color, to come meet my horse if they’re really interested. Is it likely that the woman signed her daughter up for lessons or even took some herself? Maybe not. But she might have, because now she’s seen with her own eyes that Black people ride, too. That day, that moment, was perhaps the only time she would have ever seen that truth. Despite the extensive reach of social media in this day and age, Black riders are hard to find.

At the beginning of our conversation, the woman asked me, with wonder in her eyes, if I owned Dan. Yes, I said proudly, he is mine. Now, contrast that with the white woman who saw me literally putting on my helmet and gloves to ride Dan at a cross-country schooling field, and said, “Wow, you’re lucky to take care of such nice horses.” To her, I couldn’t possibly be anything but the help.

The only instance that rankles me more than that is the police officer who would cruise by the farm where Dan lives and deliberately slow down every single time that I was out in the fields near the road to bring in a horse. Every time. I could feel him watching me and it made my skin crawl with fear and fury.

I don’t write this to bash the entire eventing world or white people in general. I don’t sit at home hating anyone for the things they’ve said and done that wounded or angered me. I write this, mainly, for my fellow Black riders. For the ones who come into the horse world after me and for the ones who rode before me.  I see you. I salute you.

To all the eventers who have never had to think about the color of their skin: this is your call to see, too. To open your eyes to what goes on around you and to challenge ignorance and prejudice where you see it. Every hateful act, every micro-aggression, every inappropriate comment, every time. Does that sound too daunting?

You’ve learned to gallop your thousand-pound horses at immovable objects, leap into water, do it to a ticking clock, and call it fun. I have a lot of faith in you.

Get Involved: As Julie says, it’s up to every one of us “To open your eyes to what goes on around you and to challenge ignorance and prejudice where you see it. Every hateful act, every micro-aggression, every inappropriate comment, every time.”

It can be tempting to close your ears or walk away when a friend, family member, barn mate or even a Facebook “friend” says something that, intentionally or not, lands in a hurtful or harmful way. But remember that silence is complicity. If you don’t speak up, you’re letting bigotry win.

What we can do, to prepare for these situations, is educate ourselves on how to respond. Here are two helpful resources: