Consider this the official press release: four-star riders Kaitlin Spurlock and Daniel Clasing are an item. Kaitlin is sorry she didn't tell you sooner, but better late than never — and to make it up to us she is sharing the story of their somewhat nontraditional but still super-sweet courtship, which she recently posted on her blog. Happy early Valentine's Day! 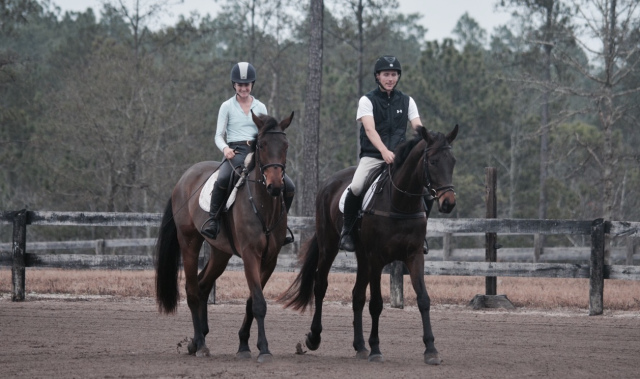 I was planning on writing this blog about New Year’s resolutions. The usual: be a better person, use an oven for more than just frozen pizza, finally learn how to speak Spanish (fluently, not Spanglish). But a strange thing happened in response to my last blog.

Friends, family and acquaintances started to focus in on a single detail I breezed past. Specifically, who is this Dan person? Sorry for not introducing him — you can check out the Daniel Clasing Facebook page here. The bigger question floating around was what exactly is the nature of your relationship?

We are dating and running a barn together, and I can understand the confusion. In the age of digital oversharing, I am woefully behind the curve. This relationship is not “Facebook official,” and I’ve never participated in #mcm (partially because I only just learned what that meant … “Man Crush Monday” to those as ill informed as myself). We have taken no selfies, and I have no Instagram to fill with pictures of my “bae.” I fully expect a member of the Kardashian family to show up and revoke my membership to the exclusive 20-something-female club.

No hard feelings, guys. I’m pretty bad at it. So, in case you haven’t gotten the picture, I’m not one to share my personal life. But it seems the personal has merged with the professional, and at the strong suggestion of some friends and family, here is the story of Dan. Because I do love to tell stories. 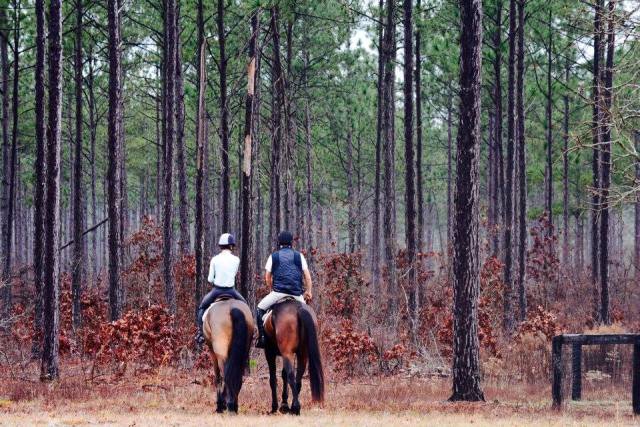 It was a group dinner at one of my favorite restaurants, Tako Sushi. Can’t remember what the occasion was, but I remember Dan was there. Dan has recently revealed that he does not, in fact, remember me being there. Naturally this revelation left me devastated, questioning the very nature of my identity. Am I not as adorable and charming as I thought?

Dan went on to assure me that “all horse girls blend together.” Only digging the hole deeper, buddy. But I have to grudgingly admit I see his point. Girls that ride are a dime a dozen, guys that ride are a rarer breed. With a very specific reputation, if Shania Twain’s classic ditty “Whose Bed Have Your Boots Been Under” and eavesdropping in the stabling areas at competitions had taught me anything.

So, 18 year old Kaitlin (wise beyond her years), mentally filed Dan away as cute-boy-who-rides-who-I-am-avoiding. And I continued dating the musician I was seeing at the time. Somehow I missed the memo on those guys.

The next time I remember seeing Dan was at Millbrook Horse Trials in 2012. We were both in the Advanced, and I had just finished my dressage test. I was walking out of the ring when Dan came trotting around the ring, next to go. Dan looks over and asks, “Where do we halt again?”

So I added on to my categorization. He became cute-guy-who-rides-who-I-am-avoiding-who-is-forgetful-or-very-laid-back. Little of both as it turns out. But again I filed him away and kept on dating my lacrosse player boyfriend. Nobody warned me about those guys either.

This next part takes the better part of two years, as Dan and I are both very reserved, quiet people. Some would say it borders on social disorder, but I’ll be kind and just say it’s a good thing we’re both better with horses than people.

But Dan trained with my boss, so we had a bit of time (over two years) to start speaking complete sentences to each other. We started chatting during lessons, waiting for our turn to jump. A sample conversation during this time:

‘It sure is (insert current weather condition).”

We progressed from there. And I got to know Dan and realize he is a pretty super person. Kind to his horses, good to his friends, surprisingly funny, and still pretty cute. Which didn’t hurt.

So to bring this story into present tense there are two versions I could tell you.

The first is the sobering account I’m sure our parents would want to hear. Two responsible adults sat down and made a business plan, taking into account financial risks and possible pitfalls.

The second version is the one I think my friends would like to hear, which is the classic “and then they lived happily ever after.” I’ll avoid either of those, as the truth is tangled somewhere in the middle.

But after dating for over a year we did decide to pool our resources and hang out our shingle together. We looked for ideal locations and were lucky enough to find the beautiful Hermitage Farm in Kennett Square, PA, which will be the perfect base.

We did do the whole business plan thing, and for a moment I felt very adult. Until I sat down with my freshly installed QuickBooks and nearly threw my computer out the window. Dan talked me down. It’s a work in progress.

And as far as running the barn together, it’s been pretty easy. The conversation went something like this:

So that’s what we do, and I’m realizing that maybe in four years our conversation skills haven’t improved all that much. Oh well. And as for the day to day riding and training, I do my thing, Dan does his. We both have enough respect for the others way of doing things/fear of sleeping on the couch to give unsolicited advice. But watching is learning, and I think we are both benefiting from riding around each other.

When the riding is done we hand over the basic barn chores to our super working students while Dan and I focus on our specific barn management talents. For example, this afternoon Dan worked on the tractor dragging the ring (because when I drive the tractor I manage to take out fence lines) and I worked on pulling some of the horses’ tails (because when Dan pulls tails it looks like the tail has merged with a porcupine).

And now the days work is done, Dan’s watching football and I’m typing this. We’re splitting some cookie dough ice cream right out of the carton (we went to the gym earlier, it’s justified). Dan’s even fishing out some cookie dough just for me. So basically … happily ever after. 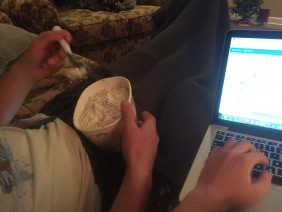 Thanks for sharing, Kaitlin! Do you have a story of eventing romance? Send it our way: [email protected].