EN is thrilled to have different members of Lauren Kieffer’s team blogging surrounding the Pan American Games and during her temporary move to England this fall in this new series presented by Athletux. Today, working student Lauren Mair recounts her dream gig working for Lauren. 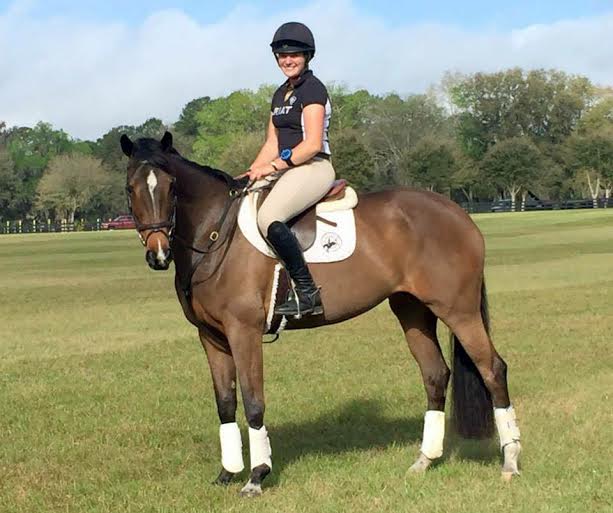 Whenever someone asks me, “How is the working student gig going?”, I try to send along a picture of the view from the top of High Acre. How did I get this lucky?
I’m just a girl from Vermont who somehow ended up in one of the most beautiful places in the world working for one of our sport’s rising stars. Pinch me, please.
In January of 2014, I received an email from a great friend asking if I would want to go to Rolex with her as an early college graduation present. Needless to say, I couldn’t hit reply soon enough.
Within hours, my professors were receiving emails regarding my absence from classes that were three months away. If you have ever experienced Vermont in January you are aware of just how dark, cold, snowy, and COLD it is, so looking ahead to Kentucky in April was a welcome daydream.
Then came the reality part. I had been slowly but surely crafting my “I want to be a working student” email and with Rolex as my beacon of hope just around the corner, it was time to press send.
After receiving a response from Lauren and learning more about her program I became completely intrigued and hooked. I mentioned to her that I would be at Kentucky in a few months and we agreed that it would be great for the two of us to meet.
When I arrived at the park, I was ready for a super weekend with a great friend. little did I know how spectacular the weekend would really be for everybody associated with Lauren Kieffer and Veronica.
Come Sunday morning, the scoreboard looked pretty special. Although I was through the roof excited for the LKE crowd, I was beginning to wonder if Lauren and I would ever get a chance to cross paths as this was clearly her superstar weekend.
As we were just sitting down to catch some rays and watch some stadium jumping in the hot Kentucky sun, I received a text from Lauren saying that she was over by the warm up and that I ought to swing by. And that was really that. She was in second place going into show jumping at Rolex and she made time for a girl with the same name as hers to talk about a working student position.
I have now been at LKE for nearly nine months and I still feel like that same fangirl that met Lauren in the tent at Rolex. Lauren made time for me that day, and this team continues to make time for everything and everybody.
Even though we have several top horses in our barn, there is still time to work with and bring along the future superstars in the Landmark homebreds. Just a few weeks ago, on a rare weekend without an event, we all made time to rally together and enjoy a night out on the town to celebrate Irish Sara’s bachelorette party.
LKE is a team that is passionate for our sport and the horses that make it great, but this is also a team that cares deeply for its people. I feel eternally lucky to have found my home at LKE. It’s been a great nine months!
I look forward to many more exciting adventures with this team, and many more breathtaking views from the top of the mountain. Thanks for having me along for the ride!
More Insanity on Horse Nation >>