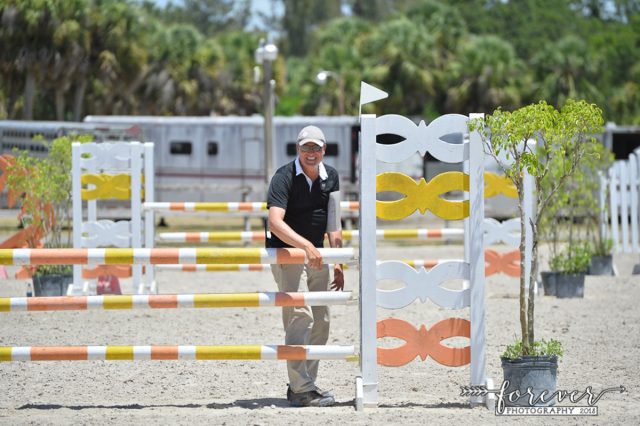 Jay Due in his element while setting courses in Venice, Florida. Photo by Forever Photography.

Jay Duke believes that a good jump is a good jump, no matter what discipline the rider chooses. So for this international show jumping rider turned clinician, course designer and proponent of good horsemanship in all disciplines, the lines between straight show jumping and eventing are beginning to blur. With his innovative lesson plan program, helpful clinics and straightforward approach to jumping, Duke has become a popular choice for eventers as well as show jumping competitors.

Duke recently visited Niceview Sporthorses, an eventing barn in Bozeman, Montana, to put his lesson library to work in a clinic with riders under the direction of trainer Melissa Thorson.

“I rode four very different horses that were all at various levels,” says Thorson. “Specifically, my Prelim horse is very difficult and sensitive and I have been struggling to get him rideable for stadium jumping.

“Within 10 minutes, Jay changed a couple things with my equipment as well as a little change with my position and the horse was completely different. I just returned from an event and he has never gone better. Jay wants both you and your horse to be better.” 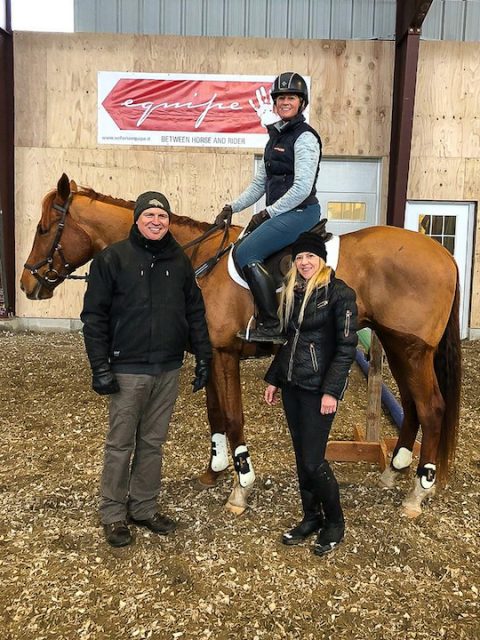 Duke began his riding career at four years old under the direction of his mother, well-known Alberta trainer Cheryl Anderson, and his father, Fred Duke, who came from Western riding roots and is a member of the Canadian Cutting Horse Hall of Fame and the Canadian Pro Rodeo Hall of Fame.

“There was no defined start to my career with horses,” says Jay, who started competing on the A-rated show jumping circuit at eight years old. “The goal was to ride on the Canadian team and then go to the Olympics. Only part of that dream worked out for me, but there was never any doubt in my mind that this sport was where I belonged.”

Jay started his career in the tack competing at Spruce Meadows in Calgary, Alberta, and after enjoying much success as a junior rider, went on to represent Canada on the international scene and competed on Nations Cup teams throughout North America, including at the Washington International Horse Show and Toronto’s Royal Agricultural Winter Fair.

In 2014 Jay hung up his show coat and retired from competition to shift his focus toward teaching. He became an Equestrian Canada senior course designer and began sharing his knowledge of training, riding, and competing across all levels at clinics throughout the United States and Canada. But, he wasn’t done yet.

In 2017, Jay spearheaded a project to crack the code on the guessing game of lesson planning, jump schools and horse show preparation.

Have a horse that stops? Have a horse that rushes? Have a horse that needs a little polish before a competition? Jay has pocketed lessons, tips and maybe even a few tricks throughout a lifetime in the horse sport industry and he isn’t keeping them to himself. His lesson plan repertoire has something for every horse and rider spanning the disciplines of show jumping and eventing and he wants to share them.

As a result, he launched the Jay Duke Equestrian’s Virtual Lesson Program. The 4-1-1 on the program: 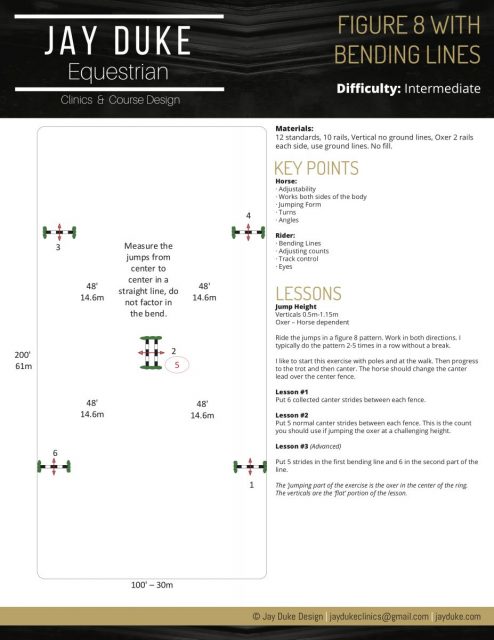 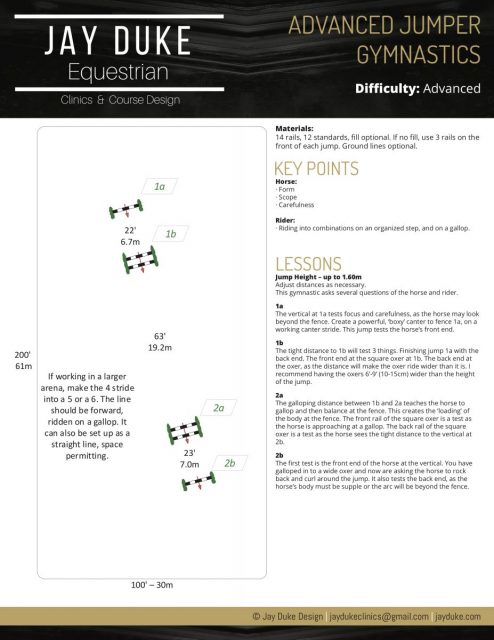 To find out more about the program, click here.

“Anybody that has a positive attitude and wants to learn can be successful, and that is what I find most enjoyable about this program,” says Jay. “Often, the lessons are not so different from the lower level to the higher level; it’s the expectations and technicality that vary. When I teach a rider from any discipline, I ask them two questions: what’s your biggest struggle, and what’s your biggest strength.

“From there, I try to get the most from that horse and rider and produce a positive result where both did something they didn’t think they were capable of doing. I hope that this the lesson plan program can encourage riders and trainers to get that same result on their own.”

The goal of the virtual lesson subscription program is a simple one: to help riders be better horseman and to help horses reach their potential. Jay’s effort to cross the lines set between disciplines is one that he hopes will bring riders together for the betterment of their horses.

“In my experience, it’s when the equestrian community operates as a whole rather than a group of individuals that magic happens,” says Jay. “To that end, I created a program where trainers, coaches and riders who train themselves could work together to mold educated, well-rounded horses and riders at any level.”

Jake Duke is a show jumping rider, course designer, clinician and Canadian Equestrian Team veteran. Duke retired from competition in 2014 to put his extensive background of training riders and horses of all level and disciplines to work as a clinician. Duke is also a popular course designer, holding his senior status with Equestrian Canada. For more information about Jay Duke, his clinics, and course design availability, visit jayduke.com.