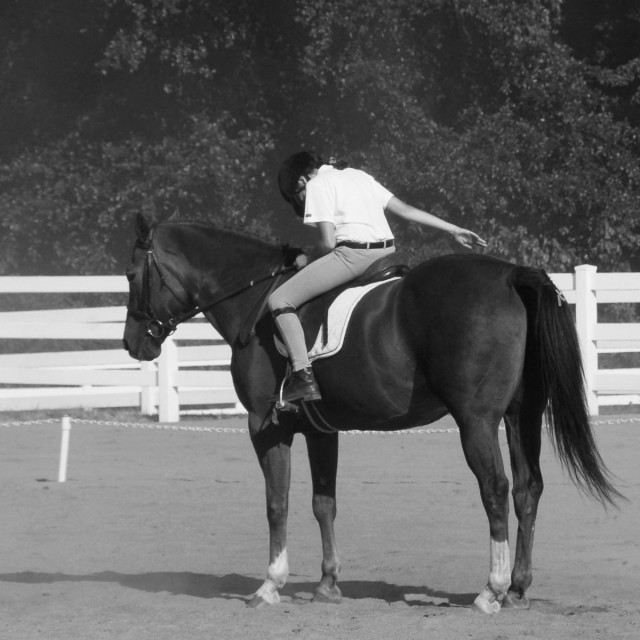 Yeah, you read that right, love and dressage in the same sentence on an eventing website. Everybody likes to drink the haterade when dressage comes to the table. It’s not an arena, it’s a little white box. It’s not a dressage test, it’s five minutes of your horse asking where the jumps are while you try to do circles in a sandbox, but you didn’t get to bring any sandcastle building toys and they frown upon you taking a drink in with you. What could possibly be fun about that?

Well I’m here to tell you that dressage is actually really awesome and you need to get with it, angry anti-enter at A people.

I happen to be a grounded eventer, I currently board at a dressage farm and there isn’t a single jump on the property. When no one is looking, I sneak out and jump my little OTTB mare over a drainage ditch to make sure we still know how to do that, but mostly we play at fancy prancing.

She’s not fancy, and when she prances it’s usually in protest of picking up the correct lead, but I still find myself, amazingly, unexpectedly, unbelievably, loving dressage.

The first step was one I took kind of unconsciously, but if you want to go down this road of romance with horsey ballet, you’ll have to do it too. I started actually following FEI dressage, you know, the real kind where more than one movement in the test is difficult to pronounce (what is the proper syllable to stress in piaffe?).

Can you name the horses and riders on the USEF’s short list for the dressage WEG team? You should, because they’re all amazing pairs and they do the same sport that we have to do well to actually win. I realized after lurking around at Devon and a bunch of local recognized dressage shows that I had a very limited understanding of a lot of the basics, and with observation comes understanding and appreciation.

I decided to volunteer at dressage and eventing shows as a scribe, and I can tell you that nothing is more inspiring than listening to a judge point out his or her pet peeves. I was pretty sure my guilt was going to manifest itself as a wrinkly little gremlin and out me right there in the car. SHE FALLS IN ON THE CIRCLE TOO! SHE NEVER TRIES FOR TRUE CONNECTION! SHE LETS HER MARE CANTER ON THE FOREHAND!!

But what really followed me home and got me thinking were the nice things the judges said, when they complimented a movement that wasn’t perfect but they could see the effort. There was good march in the walk even if the walk was early, or the smoothness of a transition even if it wasn’t the right lead, or the great stick in the halt even if it wasn’t square. The scores weren’t perfect to reflect that, but there were so many parts of every test, so many lines of communication to open with your horse to be able to not only stick that halt, but stick it square with connection.

And what a feeling to stick it, salute, and lean down and give your horse a pat, knowing you’re never so on the same wavelength as you are in that moment.

The first step to falling in love with someone is getting to know them. Have you truly given dressage a chance yet?