For 616 accepted trainers, the journey to the Retired Racehorse Project’s 2020 Thoroughbred Makeover and National Symposium, presented by Thoroughbred Charities of America, is underway! The 2020 event will take place at Oct. 7-10 at the Kentucky Horse Park. Between now and then, five eventing trainers will be blogging their journeys, including their triumphs and their heartbreaks, successes and failures, for Eventing Nation readers. Today, we’re checking in with trainer Sabrina Morris. Sabrina is taking aim at the Makeover with Phlash Phelps, a 2011 Maryland-bred gelding (Great Notion – Love Me Twice, by Not For Love) who won nearly half a million dollars on the track. Sabrina was his exercise rider, and now the pair is embarking upon a new chapter of life with one another.

My name is Sabrina Morris, and I have been accepted into this year’s Retired Racehorse Project with my long-time partner in crime Phlash Phelps.

Phlash is a bit of a local celebrity here in the Maryland Racing community. He won the Maryland Million Turf two years in a row, only to be beat in a photo in his final appearance on Maryland’s Day at the Races. I  have chosen the Makeover as a goal for us this year to show that even an older racehorse can learn new tricks. 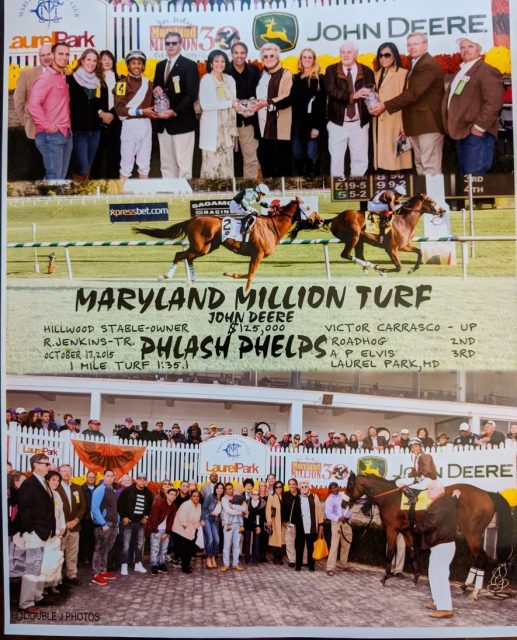 Phlash and I have had a rider/horse relationship for going on seven years, as I was his primary exercise rider during his racing career at Laurel Park. We formed quite the bond over the years, trail riding around the backside, checking out new spots to grab a few bites of grass before hanging out on the outside rail for a solid 25 minutes everyday. I know, it sounds like he and I lived in a state of horsey bliss. Do not be fooled. Phlash isn’t your average Thoroughbred. He is nearly 18 hands (hard to know exactly as that scary measuring stick is NOT allowed within his bubble), and is one of the smartest, stubbornest and strongest willed horses I have ever come across. His opinion is the ONLY one that matters. And I’ve met quite a few difficult horses in my 36 years on Earth.

The kicker? I had ankle surgery in February and won’t be cleared to ride until sometime in May. My poor students get the pleasure (frustration) of introducing him to jumping, field trips, riding out in a group, tacking up in cross ties and bridling. Godspeed, ladies.

I want to shed some light on my background before we get too deep discussing all the ways Phlash voices his opinions on a daily basis. If anyone is equipped to handle this challenge, I would think my resume/rap sheet should give me the tools necessary to survive.

You could say I was raised in the barn. My mother, a small animal surgeon, insisted my sister and I grow up dirty, smart and mouthy. I’ve been told a story of my mother delivering a foal with infant Sabrina in a feed tub, in February. I have been on a horse as soon as I could sit up and grab mane. It was downhill after that. We were raised cleaning stalls, riding naughty ponies or anything we could manage to hold onto. We both graduated from USPC with the A rating. As a child I was active in Pony Club, fox hunting, eventing, pony racing, mounted games and other brilliant childhood ideas including hooking a Radio Flyer or sled to a pony with my horse crazy neighbor Jessi.

My first “real job” at 16 was breaking young horses for racing and sport careers. I was also competing several self-produced Thoroughbreds to the former 1* and 2* levels in high school. After a packed eventing schedule as a teen, I needed a break from competing and the stress endured while struggling to make it to the top levels. After the mental anguish of retiring a promising young eventer early in his career, I was finally burnt out. At the time, I was galloping at the track six days a week. I was quickly offered ,and accepted, the position of assistant trainer. This new role included overseeing the everyday care of 20 to 45 racehorses at Laurel Park in addition to galloping eight to 10 horses a morning. Given my hands-on horse knowledge from USPC, Equine Sports Massage Therapy certification and my eventing background, the transition to racehorses full time instead of just my morning job was seamless and rewarding. 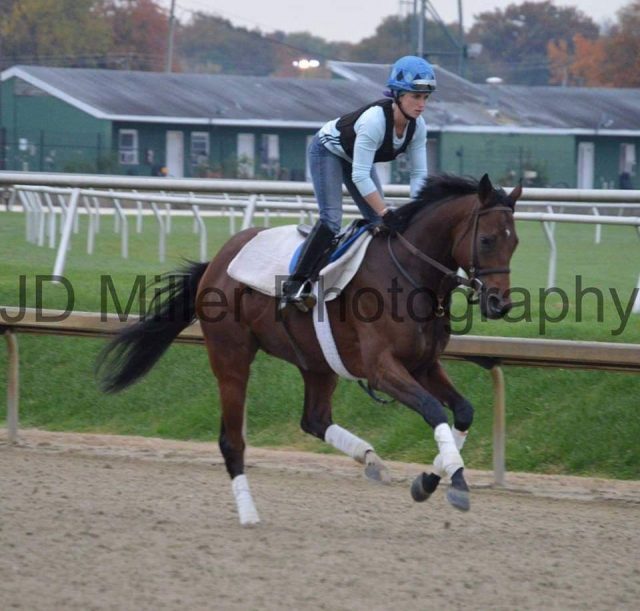 Flash forward 14 years. I have been an assistant trainer, exercise rider, groom, hot walker, worked in the afternoon saddling horses and ponying them to warmup before races. I have even ridden in a few amateur races for fun (obviously it’s fun to possibly die at high speeds, but this time in a group). Recently I’ve added racehorse owner to my list of Thoroughbred licenses. I love the raw power racehorses possess.

Oh, and I bought a farm a couple years ago. An old farm with a great happy aura and green pastures where I focus on rehabbing horses from injury and transitioning into second careers. By the way, old farms always have fun learning experiences to go with the beauty. You learn to have a really good sense of humor. My ability to juggle working at the track, managing a farm, remembering to shower and eat on occasion, and sometimes ride my own horses have significantly improved with practice. But this lifestyle is not for the weak. Thankfully the farm came with its own Resident Manager William to oversee all business of improvements. William enjoys his payment of dry food and head pats. In my spare time I am developing the facility, building a successful business, mowing, repairing fencing, teaching a handful of students and constantly adding to my herd of bays (with an occasional chestnut or grey).

I love riding and training young horses, weird horses, quirky horses, difficult horses, horses recovering from injury and sicknesses. Horses that need a second, or a third chance in life. Horses that scream ability and talent but possibly a helicopter ride to Shock Trauma. So naturally Thoroughbreds and I are a match made in heaven. Well, some days hell, but I love a thought-provoking challenge….

Phlash Phelps was bred and raised in Howard County by Carol Kaye out of her stakes producing mare Love Me Twice, by Maryland Super Sire Not For Love. The son of Great Notion was sold at Fasig Tipton Midatlantic Yearling sale for $85,000 in 2012 to Mrs Ellen Charles of Hillwood Stables. Phlash started his racing career under the watchful eye of Hall of Fame Show Jumper turned racehorse Trainer Rodney Jenkins. He showed immense talent in his 2- and 3-year-old races, but also his pig headedness and rank demeanor. He didn’t want to be told what to do: on the track, on the ground and especially while saddling for a race in the paddock. Phlash was a big strong colt, with a bigger attitude and incredibly high self-esteem, and he has some pretty flamboyant ways to show it. 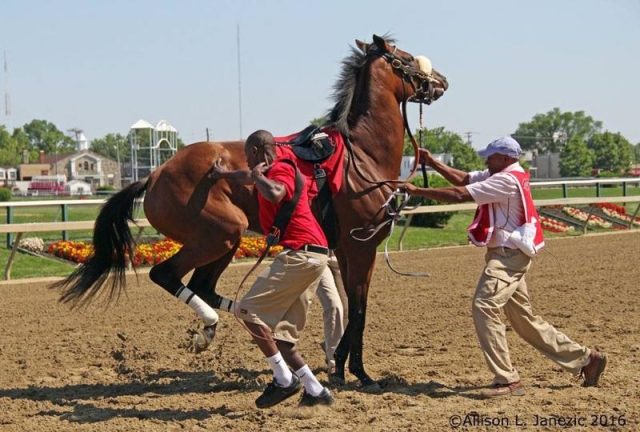 Phlash with his rank saddling antics at Pimlico Race Course.

I began working for Mr. Jenkins in April of 2014, and Phlash Phelps was one of the first horses I rode for him. I remember it well. He stopped just outside the barn. I asked him to go, he tilted his head up and to the side to look back and me. And then ignored my request. I tapped him with my stick behind my leg. Another (now well known) Phlash Side Eye. And no response. So I cracked him pretty good. Bad move, Morris. I was promptly deposited on the long beautiful graceful neck of this very large jerk of a horse. But he gave me a moment to push myself back into the tack. Before he finally took a few free willed steps, he gave me the side eye, again. Touché Phlash, touché.

The Game began. Colts like to play games, some of them by being mouthy, or disobedient, but occasionally you’ll come across one that’s sensitive and exceptionally intelligent and engages on a whole different level. Phlash competed on the expert level of mind games. I had to learn how to beat him on his playing field, where he frequently changed the rules. Some days he wanted to stand on the track for 30 minutes, some days he wanted to put his nose to his chest and run off galloping, and most days he was leaping, squealing and ducking away from other horses during training. On more than several occasions I found myself balancing on his poll due to an exuberant hind end, typically in close quarters while walking back to the barn. 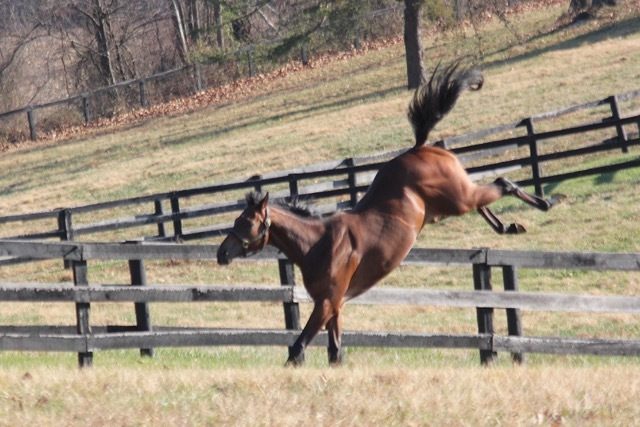 I wasn’t afraid of him. He was disappointed. The more hi-jinks he pulled with me, the more I was able to stick with him, mentally and physically. Phlash met his match. And I was in awe of his athleticism and intelligence. We finally reached a mutual respect for each other.

After several frustrating races, Mr. Jenkins suggested it was time to geld Phlash. His afternoon efforts had yet to lead to a win, and it was clear  Phlash was not a fan of other horses crowding him, which can be due to colts’ nature to protect themselves. His first race as a gelding was set to run on the day I was traveling with friends to Rolex Kentucky Three-Day Event in 2015. I was watching his race on my phone from the backseat while we sat in traffic. It was incredible. Phlash had to split horses, twice, then battle head to head and made it just in time to cross the wire first. I was riding and screaming right along with every stride. Pretty sure the vehicle next to us thought I was disturbed. Phlash galloped out strong, and history was made that day. He won every race he started in that year, including the Maryland Million Turf, and earned top honors as Maryland Bred Turf Horse of the Year. Phlash always knew he was special, and now the rest of the racing community started to take notice.

Phlash’s career as a turf horse meant he got a few months off every winter and only raced a handful of times per year. He finished his impressive career at 8 years old with $434,801 in earnings, with seven wins from 24 starts. Mrs. Charles and Mr. Jenkins understood the bond between Phlash and I. He would nicker to me when he heard my voice in the barn and would get jealous if I stopped and talked to another horse and not him. We were going on year six together; all my track friends knew we were inseparable. He didn’t accept just anyone into his bubble. When I was injured a couple years back, my friend and work mate Katie Domino took the reins. She would report back how he would tolerate her, never accepted her offers of peppermints, and found out what happens if you use a whip on Phlash to encourage him onto the track in a timely fashion. 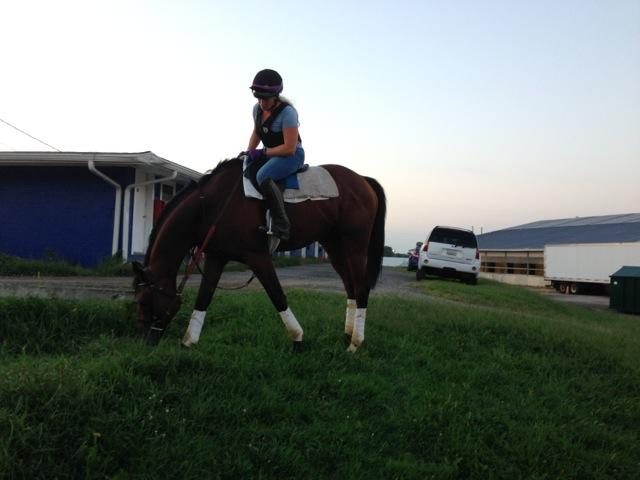 HOW TO RETRAIN YOUR DRAGON

Most eventers interested in Thoroughbred prospects look for the 3- or 4-year-old gelding, uphill mover with a look of eagles and a solid brain. I usually pick mine by a gut feeling, overlooking some lumps, bumps and questionable sanity. I had countless day-dreams of Phlash and I winning dressage and flawlessly coasting around a huge cross country track and coming in well under time. Then a nail-biting show jumping round, with the crowd in silence until we finished with all the poles in the cups to clinch a major win.

Finally, the day came. A 4 a.m. phone call from Mr. Jenkins saying “Bring your trailer with you this morning. He’s yours.” 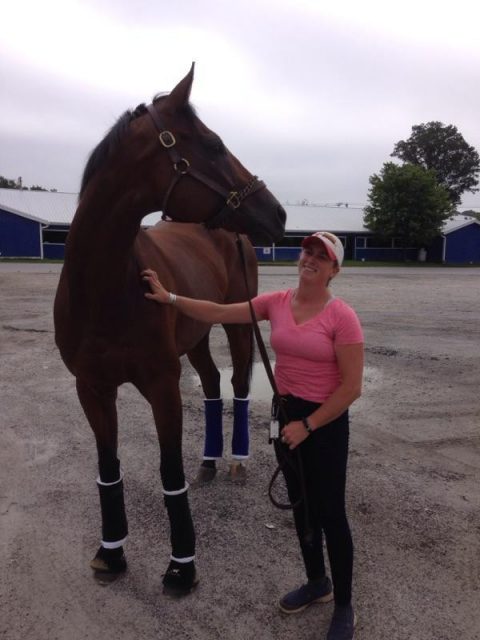 Ready to load, but first one last look around Laurel Park. Photo by Eveline Kjelstrup.

SO how does one retrain something they spent years spoiling and cultivating into a monster with a personality larger than his 17.3 h stature?? Well, that’s where this journey begins.