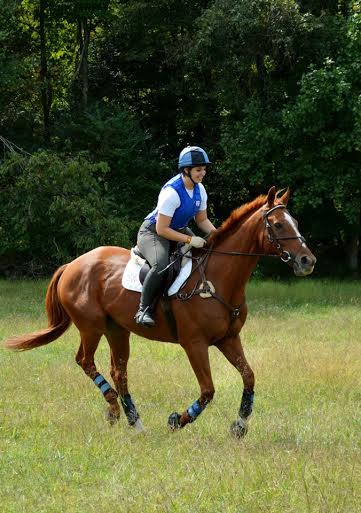 But before I tell you my story, let me give you a bit of background.

Jimmie Echo was a very good steeplechaser until he decided not to be — and then he became infamous for his starting line antics. My very good friend galloped him and absolutely adored him so when it was time for him to find another career, she snatched him up.

She had him for several months and the whole time all I heard was how special Jimmie Echo was and how much she loved him. Around the same time, I had made the very tough decision to sell my current horse as he was just too much horse for me.

We ended up swapping — they sold my horse and I bought Jimmie Echo. He came to me in April 2010 and he truly was everything my friend had said. He was one of those horses that you sit on and you just know they are right for you.

All through 2010, we showed in local combined training and dressage shows with a schooling horse trial at the end of the season. He was wild on cross country (no surprise there) and it took me quite a while before I figured out how to handle it. Once he discovered that we are no longer racing, he assumed his normal lazy behavior.

I was thrilled at the prospect of doing some recognized showing in 2011 and had my goals and plans lain out. Of course, I should have known better than to have plans set with horses. It is almost like they know and at the last second find some way to put a wrench in those plans — a pulled shoe, a lameness, a big ole’ cut, etc.

I actually know the exact date Echo went lame because it was my birthday (great birthday present, Echo): March 7, 2011. We had done a jumper clinic the day before and did very well. The clinic had only added to my excitement for the show season.

Echo came out of his stall on the 7th with that odd, “hitchy” gait that is typical of a horse needing their hocks injected. I am not a fan of injecting joints without knowing what you are working with first so we shot some films of his hocks and were horrified at the findings.

They were far along in the fusion process and how he was as sound as he was — that was just unbelievable. This was made even more incredible when he only flexed a 1/5 on both. So we injected both hocks and when two weeks later he wasn’t better, back to the clinic he went. We initially thought perhaps Echo just needed more topline and hind end muscle.

Let me interject here and let you know that I do equine insurance claims and therefore am intimately familiar with lameness (on paper). I have heard time and time again that the horse wasn’t significantly lame but there was just something “off” and it turns out to be a suspensory injury. I remember on the way to the vet clinic telling my friend that this was a suspensory injury. I have never been more dismayed to be right.

I asked the vet to do some further imaging just to confirm that if I increased Echo’s work program, I wouldn’t break him further. I will never forget the look on the vet’s face when he did the ultrasound and saw the damage.

When the vet went back and palpated the exact areas that had the injuries — there was no reaction from my horse. None. Jimmie Echo is just outright too tough for his own good.

At this point, my vet laid out the options. First of all, prognosis for return to full work with significantly injured bilateral hind limb suspensory injuries is not good. Given the location and size of the lesions, surgery was the first recommendation — specifically a fasciotomy with PRP and a plantar neurectomy.

Shockwave could be tried as an option first but my vet felt that since the right hind suspensory involvement to the bone (origin) existed, it was not likely to offer lasting improvement.

My head was spinning. I elected to go with surgery because in my mind, what did I have to lose? The prognosis isn’t good for soundness so I either have a lame horse without doing anything or throw I could the book at him and still have a lame horse.

I spoke with another veterinarian, who is an acquaintance of mine, and she said that the fasciotomy/PRP/plantar neurectomy is the “gold standard” at this time. She agreed that hind limb suspensory injuries are very difficult to recover from in terms of soundness.

I felt like I wanted to give my horse any and every chance I could to heal. He is my heart horse and the thought of never sitting on him again was devastating.

Echo stayed in the hospital and had surgery the following day. He came home two days later and we began the rehabilitation process. 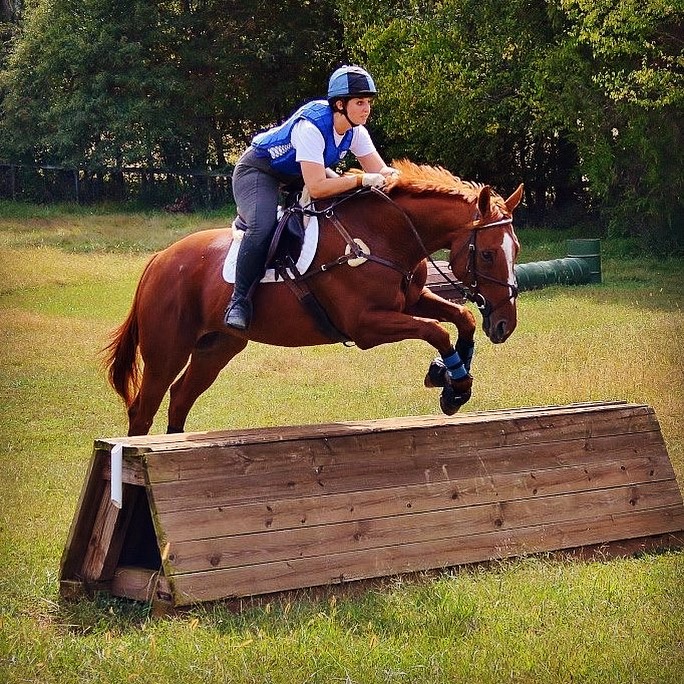 I am incredibly lucky that my guy is so very sane and despite being on strict stall rest with hand walking only for two months, he was perfectly well behaved. The worst behavior he ever exhibited was refusing to pick his head up while being hand grazed.

Echo developed some hind limb edema, so my vet had me start walking under saddle for short periods of time earlier than anticipated to hopefully help the swelling dissipate.

The first time I sat on him he ambled around the ring like he hadn’t been cooped up in a stall. I cried. The whole thing was such an emotional rollercoaster and just sitting on him was a major milestone.

Well, actually everything was so stressful that I am not going to lie — there was a lot of crying involved. Any “off” step, any set back, anything really great …. tears.

Gradually we built up to private small paddock turnout. I started the slow process of bringing him back with a few minutes of trotting initially and gradually building up to longer periods. I got to canter him the first time on July 18, 2011 for the vet to see him go. I wasn’t given permission to bring canter work into the program yet but the vet wanted to see how he was doing.

By October we were cantering well although it was primarily trotting with some raised cavelleti. I almost did a jig when my vet asked me to take Echo over a cross rail. Echo was excited and we left a stride out. You would have thought it was a big oxer in terms of the height that he jumped it. I was able to begin light jumping and building up to more courses and higher jumps as time went on.

I was actually able to take him to a local dressage show in the fall and did the walk-trot tests. I cried at the end of my first test. The prognosis for soundness had been so poor and the whole thing had been so turbulent that to be back in front of a judge was just overwhelming (in a good way!).

However there was still some nagging off and on lameness, specifically a hip drop and a right hind lameness. The vet felt that the problem at this time was recurring distal hock pain.

We tried Tildren as a last resort but when that did not help the hock pain, we ended up chemically fusing his hocks with ethyl alcohol (painless) on November 16, 2011. That made a huge difference almost immediately and Echo was stepping under himself well for the first time in almost a year.

I rode less than normal, but did so all through the winter and was showing Beginner Novice at schooling shows in the spring of 2012. Almost one year to the day we were at a show doing the same level we had been prior to his surgery.

Echo is currently doing First level dressage and Beginner Novice/Novice eventing (depending on the rider) along with the jumpers, hunters and pleasure classes at the Thoroughbred shows.

He is extremely versatile and has gone from a pleasure class to a jump off class within a couple of hours. I maintain him on monthly Pentosan and usually Cosequin. I am exceptionally careful with footing and conscious of how much he does. He has Back on Track leg wraps (and sheet and hock boots…) that he wears frequently. He also gets iced after any hard jump or cross country schooling. 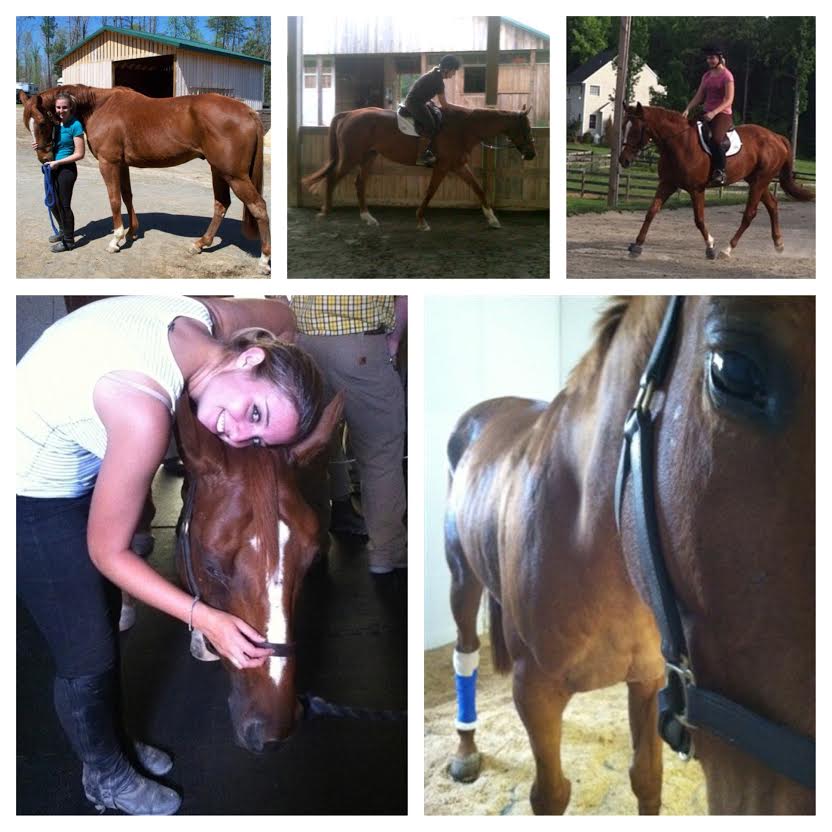 Writing and re-living this experience has made me appreciate every moment with my Jimmie Echo even more than I already do. I am so lucky to have a horse like him in my life — he gives me confidence when I need it and there is no view better than the one between his ears.

As this draws to a close, I cannot leave out my thank yous:

Thank you to my amazing vet, Dr. Douglass Berry – without you, I wouldn’t be riding this horse today. Thank you to my coach, Lainey Ashker – your support and knowledge was invaluable and our strength as a pair grew under your tutelage.

Thank you to all of my friends (specifically shout out to Bethany Astorino, Rachel Hinson and Geri Hollander) and family who helped me during this nightmare — I could not have gotten through it without you!

Thank you to my best friend Michelle Craig, who brought this amazing creature into my life. Even with this mess (which nobody had any way of knowing was there), he is still everything you raved about and much more. We clicked just like you thought!

And last but definitely not least, I would like to thank Anne Schmid of No Worries Farm. Her expertise with medicating, wrapping, handling bandaging, (teaching this idiot how to do all of the above), along with taking such amazing care of my horse while he was on stall rest and needed extra TLC is second to none.

Anne — I really, truly could not have done this without you. I will never forget the long nights we spent at the barn trying to work on him for whatever reason and the things I learned from you.