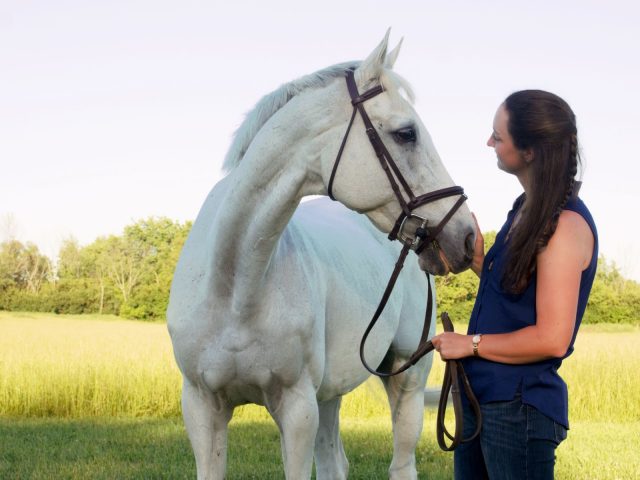 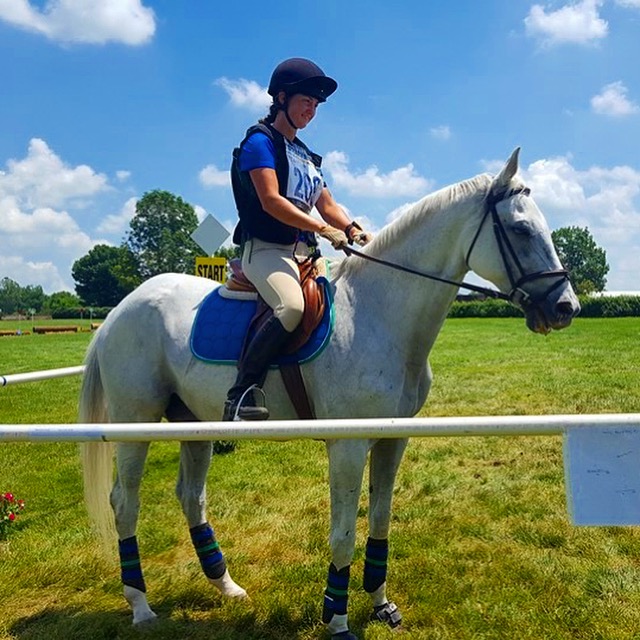 It seems like there are certain events on the calendar which mark the passage of time more clearly than others. Some of these are nebulous, undefined points in time — the first time you jump 3′ on the green horse you started from ground poles, or the first time you realize that your horse has loaded on the trailer without incident for months.

Some are more concrete — points in the year where you stop and take stock of what has truly transpired in six months or 12. For me, the Midsouth Pony Club Horse Trials is that event. I don’t know exactly why, but this is the event that makes me evaluate progress and changes, and think about goals for the future; this year is no different.

I truly met my first horse Augustus at the 2013 Midsouth event. I had signed up for my first ever recognized event with a green horse I’d been leasing for six weeks — and it did not go well. Gus was finishing his career with my coach and completed his last ever Prelim that weekend. It was suggested that I lease him to gain some much needed confidence, and I agreed, somewhat in disbelief that I’d be allowed to ride such a nice horse. That decision changed everything that was to follow for me. I won’t get into detail, but leasing (and later owning) Gus changed my life priorities in a massively rewarding way.

At my second Midsouth, Gus helped me conquer some major sports psychology issues I’d been having all spring. We won our Novice division, and I was thrilled. At my third Midsouth, Gus and I successfully navigated the Olympics of Training level in a literal monsoon, and I began to feel that with a horse I trusted, anything was possible. And last year, at my fourth Midsouth, I began to have the first inklings that our competitive relationship was drawing to a close. Nothing was wrong, per se, but we amassed time penalties on a scale unusual even for me, and I just didn’t feel that I could push the way I used to. We finished out the season, and Gus happily retired to a life of lower level lessons and cribbing.

Which brings us to this year. This year, I will head to Midsouth with a new partner to contest our first Beginner Novice together. I am excited and nervous to face this new challenge with him, but my heart is heavy, because this point on the calendar forces me to remember that time has passed and Gus is no longer with me.

In late April, Gus stumbled and fell to his knees twice. A neuro evaluation revealed moderate deficits, and none of the potential causes were good, at all. He was going to get worse, and it was only a matter of time. With this information, I made the gut wrenching decision to say goodbye to my best friend before he ever suffered. We spoiled him rotten, had lovely photos taken, and on June 9 he was laid to rest peacefully in the company of the two people on earth who loved him most — myself and my coach.

Despite the fact that I know this was the right thing, it is still a punch in the gut to realize that I can’t go see him, hug him, or kiss the snip on his nose as I always did. I do not write this for sympathy — Gus had a great, long life, filled with adventure and accomplishment. He had a job he loved, never knew hunger or true fear, and had a quiet end free from pain.

There are two reasons for writing this: one, as explanation if someone sees me bawling my eyes out at the cross country finish this weekend, and two, as a reminder to everyone — hug your horses. Give the extra treat. Blow off a dressage school every so often to gallop through the fields. You can’t get the time back — make the most of it. Go Eventing. 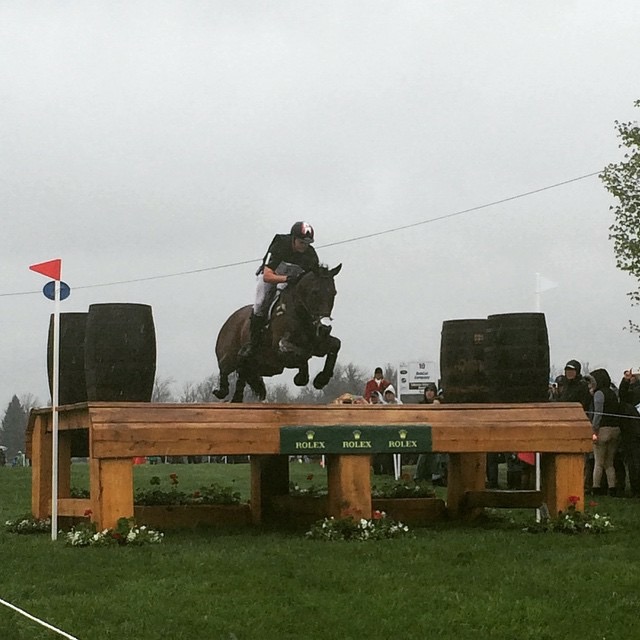 I still remember my first Rolex. I can’t remember the exact year (I want to say 2006), but I had just joined my first eventing barn and it was suggested that it might be fun for me to see the cross country. I was 16 and had a decently long riding career at that point, but it had been a bit scattered and inconsistent — western pleasure, hunt seat, and a bit of dressage before I finally decided it was time to learn to jump. My old coach sent me to an eventing stable, and it was my first experience with a trainer who actually showed in any discipline, let alone something like eventing. I knew what Rolex was before I went, but I was definitely unprepared for the actual experience.

My mom and I drove down to the Kentucky Horse Park at some seemingly unnecessarily early hour (my coach’s suggestion, to avoid the worst of the traffic), and the day dawned a bit gray and foggy. We entered the park and promptly had no idea what to do with ourselves. My coach was jump judging, so we walked the course a bit until we found her — including accidentally walking in a galloping lane, oops!

She gave us some suggestions on good places to watch, and we wandered off again. The crowd steadily grew bigger as people trickled in, and I started to get a better idea of the scale of this event. Then before we knew it, the first rider was out on course. And that was one of the moments that changed everything for me.

I remember that we were standing at a fence before the Hollow, a big ditch and wall. The whistle blew to warn us that a rider was approaching, and everyone fell quiet. Only the thud of hooves and rhythmic snorting broke the silence, until the rider (and I have no idea who it was) shouted some last minute words of encouragement and the pair left the ground. They landed safely on the other side and sped off to their next obstacle. And I was hooked.

There was a lot more that happened at that Rolex. I watched the Head of the Lake, the Hollow, took a nap in the sun during the lunch break, and pored through every booth at the trade fair. But it was that first jump that stuck with me through the years. I have only missed one Rolex since that first one, even when I took a break from riding during college.

Every year, my mom and I make our pilgrimage down, and every year it is worth it, rain or shine. Every year I watch riders gallop by on their way to glory or disappointment, and I am always filled with the same overwhelming mix of emotions that I was the first time: awe, respect, ambition, apprehension, joy.

Rolex, for me, is a rejuvenator. It reminds me of all this sport is and can be, despite the issues we know are present — and that we are working to fix. It reminds me that really, eventers as a group are some of the best people on earth. And it reminds me that things are really not so bad, as long as there are galloping horses, big jumps, and beautiful spring days in the world. 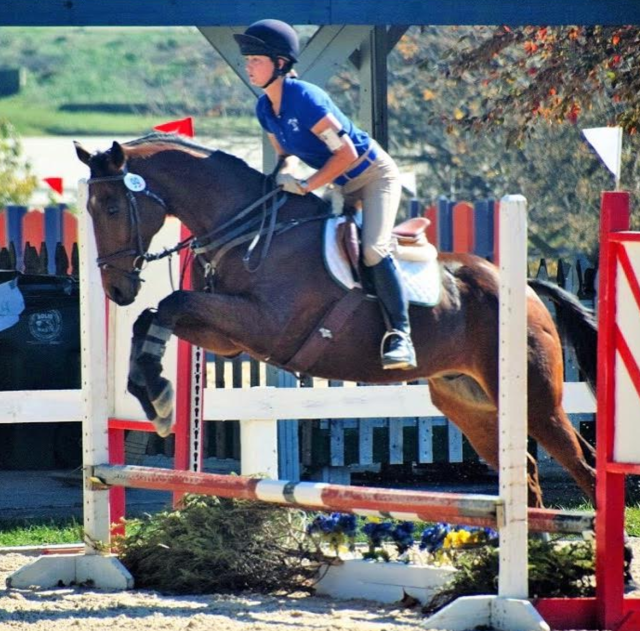 It isn’t often that a corporate seminar you’re forced to attend as part of your day job actually ends up applying more to your life outside work than it does at the office. Recently, as part of my job at one in a large chain of veterinary hospitals, I was required to attend a training session about some mysterious corporate voodoo called the “R-Factor.”

Being the inherently skeptical person I am, I rolled my eyes as I signed up for my session (and even a little as I was in the training). However, something about the R-factor has nagged at my brain since the training, and I recently realized why: it is all perfectly, 100%, unbelievably accurate and applicable to life as an equestrian.

I won’t go into exhaustive detail about the R-Factor, except to say that the “R” stands for reaction — that is, your reaction to a given event. This event could be minor (you have a less-than-stellar ride one day) or major (your horse blows a suspensory and needs months off during the most important competition season of your career). The idea is that you have no control over the actual event, but you have complete control of your reaction to it.

This control is such a critical part of being a good rider. Think about it: when William Fox-Pitt has a problem on course, does he allow himself to get flustered? Or does he quickly evaluate the situation and react to minimize the problem? Decidedly the latter.

While most of us are admittedly not as in control as William Fox-Pitt, this is still a skill we should strive to emulate and cultivate. Personally, I find that this has been relevant for me since I bought my first green horse in September. I went from riding a Training schoolmaster to an OTTB who’d been off of the track for a year.

Charleston, my new guy, has been a completely different experience. He’d had a year of let down and sporadic retraining, so he was able to steer, stop, and trot a basic course of jumps — not at all what I was used to! He’s already progressed so much, but I have found myself dealing with anxiety, spookiness and inexperience that I’ve never felt before.

What I’ve found is that my reaction to these things is what makes or breaks a given training session. If I counter his anxiety with tenseness and worry, we both become increasingly frazzled and it is difficult for him to have any kind of positive experience. However, if I respond to his anxiety by working on dressage to give him something to focus on, he softens and quiets; then we are able to keep his experiences good.

This skill applies not only in the small picture sense (reacting to spooks, silliness, etc.), but also in the big picture. One of the best examples I can recall is an upper-level eventer whose horse had an injury which sidelined him for months. He was on stall rest, and she was stuck with no big horse to compete.

I remember reading that she had made the conscious decision to use his time off productively rather than just pouting about it, and she did just that — she used those months to network and obtain sponsorships, one of which was from the company that made the bedding she used for his stall! It’s not easy to control the urge to whine and complain about things, and it’s fine to set aside some time to feel sorry for yourself, but too much of that is not only unproductive but depressing.

It’s commonly said that life is 10% what happens to you and 90% how you react, and I think as equestrians this definitely rings true. We ride half-ton flight animals at speed over obstacles — control over everything is just statistically impossible and our reaction to problems is critical.

While no one is ever going to have perfect control over their R-factor, it is something that we can always work to improve upon. This also obviously doesn’t mean that we don’t try to set ourselves up for success whenever possible, but just that we react well when things don’t go accordingly. It’s a tough skill to master, but it can make all the difference –and you will get further not only with your horse but also in life when you can maximize your R-factor.