Stacey Chepren blogs at The Jumping Percheron, chronicling the eventing training and competing process with her full Percheron mare Klein, who competes at the Novice level. Our sister site Horse Nation has featured Stacey’s helmet cam videos, and now Stacey is telling her story and sharing some important considerations for draft horses as sport horses. 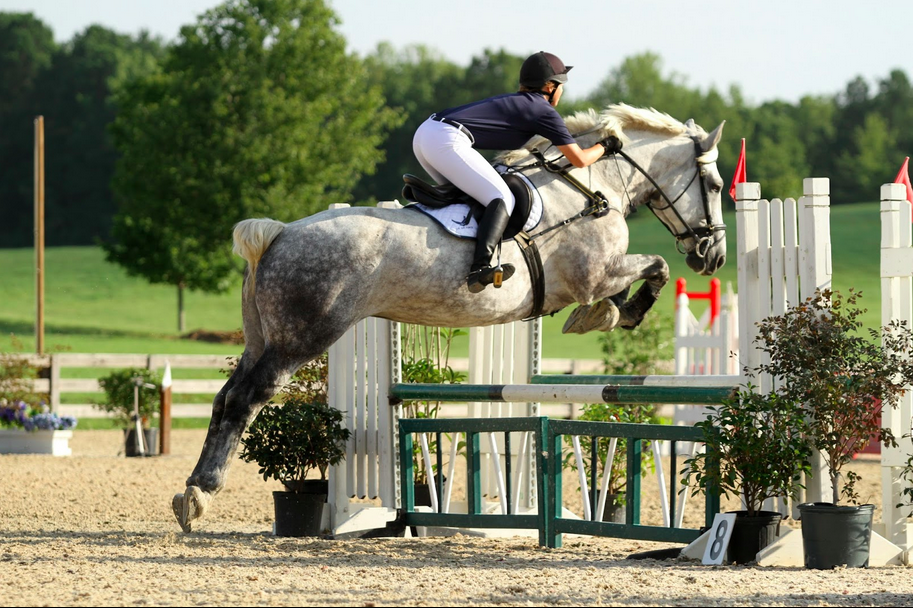 Photo by Mark Lehner of Hoofclix

Here’s a common question I get from other draft owners that ride their draft: How did you train Klein to where she is at now? Obviously there is no simple, single-sentence answer for that. There is no magical program. The bottom line is I took my time with her and trained her like you would any other horse, except I put a huge emphasis on conditioning. There can be no slacking in that department.

The training is the same as any other horse because she thinks the same as any other horse; she doesn’t see fences differently because she’s a draft. Honestly, she has no idea she is a breed that you typically don’t see out eventing. I bought her as a 2-year-old that was barely halter broke. She had never spent time hitched to anything, never been put to work on a farm or anything like that. I think that plays a HUGE part in her abilities. She never learned to use her body like a driving draft.

I think a lot of people (especially draft people) think that by doing what I do with Klein, I am out trying to make some blanket statement that EVERY draft can jump like she does. That is not even remotely close to being true. That is not what I’m trying to say at all. When I breed her in a few years, I won’t even be breeding her to another Percheron (and no, not a Thoroughbred either). I never set out with the goal of eventing her.

I have worked with Clydesdales, Shires, Percherons, and Belgians, and I fell in love Percherons and Belgians. I love their minds, their work ethic and their dispositions. I knew they could be good riding horses, so I bought Klein with the intention of riding her and maybe doing some low jumpers if she was up to it. If she was out there struggling and bulldozing 2-foot fences, then we would have stayed with flatwork. But she wasn’t. 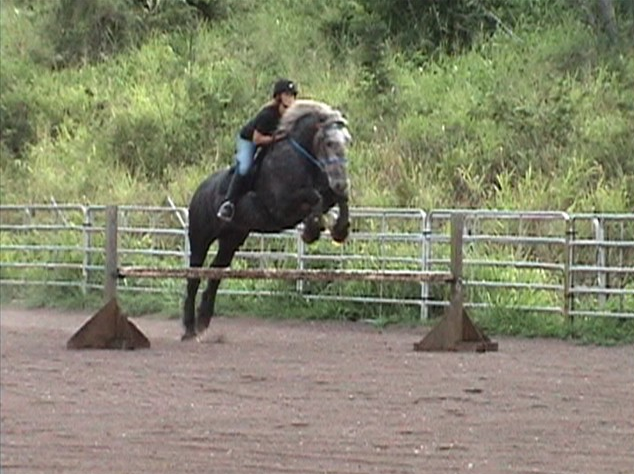 From our first 2’3″ course in Hawaii when she was 5. Would YOU keep THAT front end on the flat? I didn’t think so. Photo by Stacey Chepren. (My tripod is my best friend.)

Her enthusiasm and athletic ability piqued my curiosity to see what this girl could really do. So, I gave her a chance. 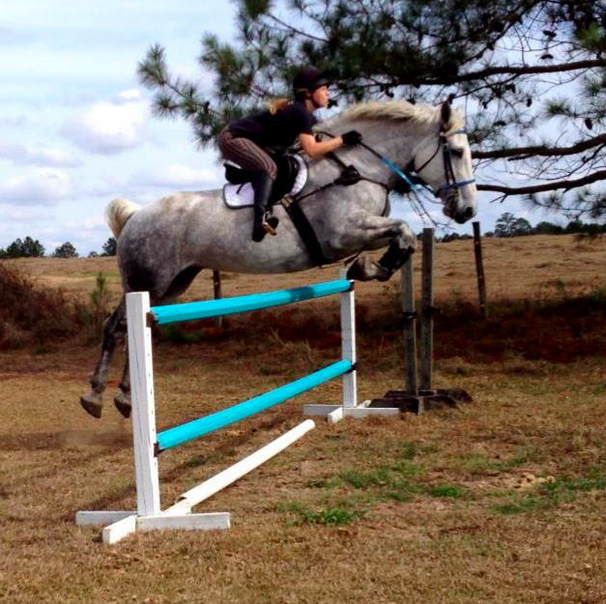 I knew I was in for some pretty great surprises with her over fences after I saw that 2’3″ picture.

However, to this day, if there is ever a time that I start to feel like maybe she’s not enjoying her work, then she doesn’t have to do it anymore. I am NOT about making her do anything she doesn’t want to do. But look at her out on the cross country course: 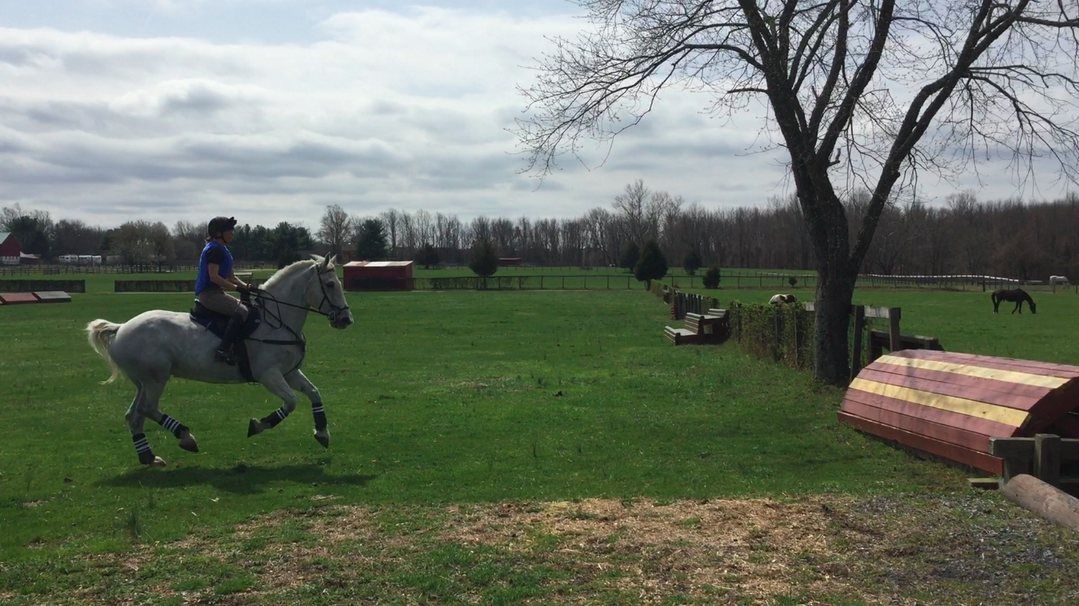 That is not the face of a mare that is being pushed around a course saying “I hate my life.” That is a happy mare, enjoying her work. Photo by Shane Chepren. 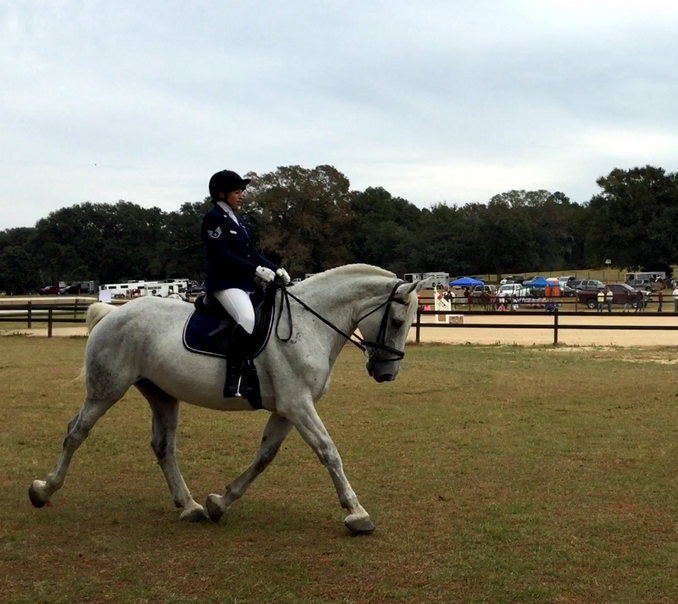 Warming up for dressage, happy and relaxed. Photo by Shane Chepren.

So, why do I think it is a bit dangerous to be The Jumping Percheron? I think sometimes we might put a false idea out there, unintentionally of course, along the lines of what I mentioned before. I think some people see her on my blog, at shows, on our Facebook page or Instagram and think “Oh look, Percherons CAN jump; time to get a Percheron!”

THAT is dangerous. Or I at least hope that when people are influenced by her when horse shopping that they take a HARD look at the important things you would look at on any light horse, like conformation. I hope that there are not any drafts out there that people are trying to turn into jumpers/eventers that gave no second thought to the actual quality of the horse.

Just looking at Klein and my Belgian gelding Wes together in the photo below; they are two completely different types of drafts. Not only because of the obvious — they’re different breeds — but they are built completely different. There are modern-type drafts and there are traditional-type drafts. Wes is the latter, and he is the type that I would never want to take off the ground.

Here is Klein’s great grandsire (on her sire’s side), Lo Lynd Joe Laet: 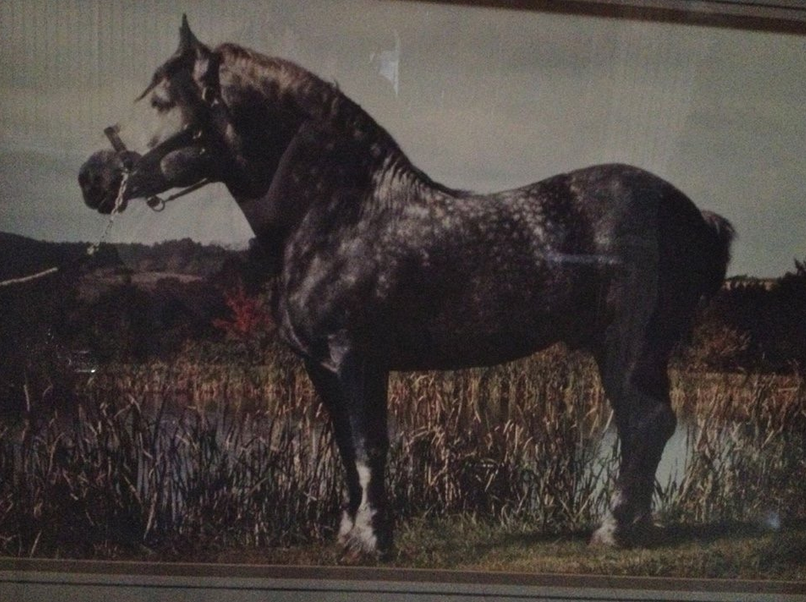 CLEARLY he would NEVER be out jumping a course! Now let’s look at Klein’s grandpa (on her dam’s side), Windy Hills Batman: 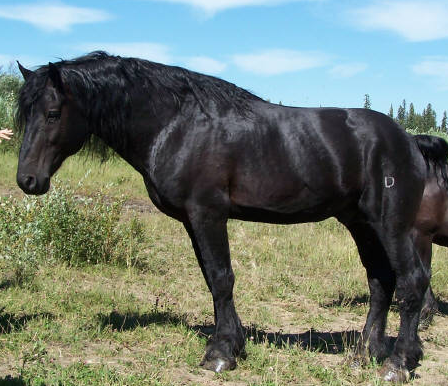 I think Klein gets a lot of her refinement from this guy. Now would I test him out over a course? Absolutely. THAT is the kind of Percheron I would be on the lookout for if I was in the market.

I don’t have any pictures of Klein’s dam or sire, unfortunately. I know her sire, Rose Hill Blayne, died about a year and a half after she was born. I believe her mom, Crow’s of Rose Hill Damara, is still in Canada. I think Rose Hill Blayne must have had a special, particular refined look to him as well.

The man I bought Klein from contacted me a few years after I bought her and said he had her half sister for sale and wanted me to get first pick if I was interested. I wish I could have. I just wasn’t in a position to buy another horse. Her name was Westbank Paige and she had the SAME refined look to her, her face especially, just like Klein.

Klein and Paige shared the same sire, so there was something special about Rose Hill Blayne, and it is too bad he isn’t around anymore. If anyone out there has a picture of him, I would love to see it.

Here is Klein’s full pedigree if anyone is interested: 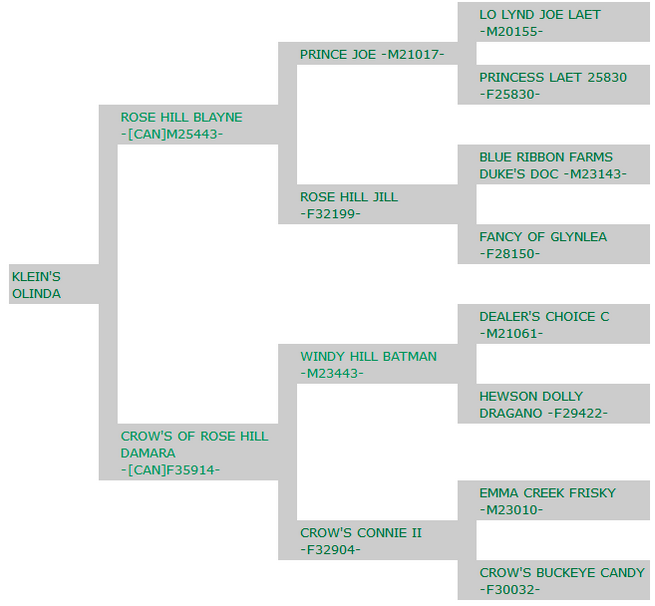 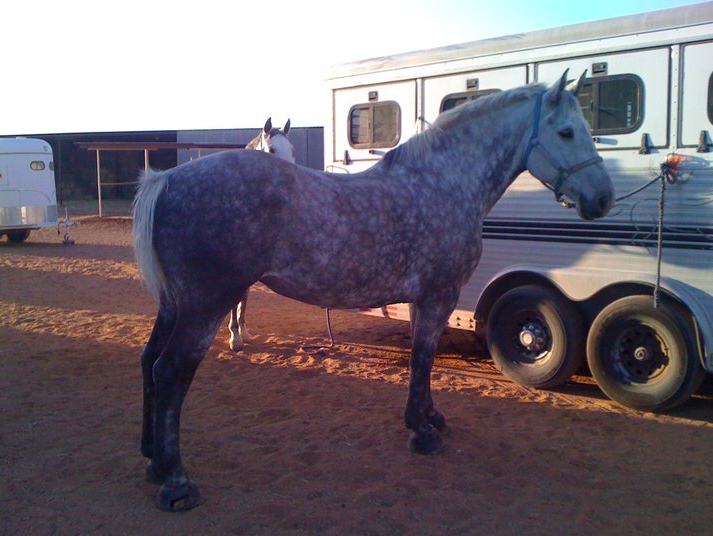 Here is 7-year-old Klein. She is as mature as she is going to get, and she is still not built like a tank. Photo by Stacey Chepren.

Now, for comparison’s sake, here is me haltering Wes; they are day and night in their build. 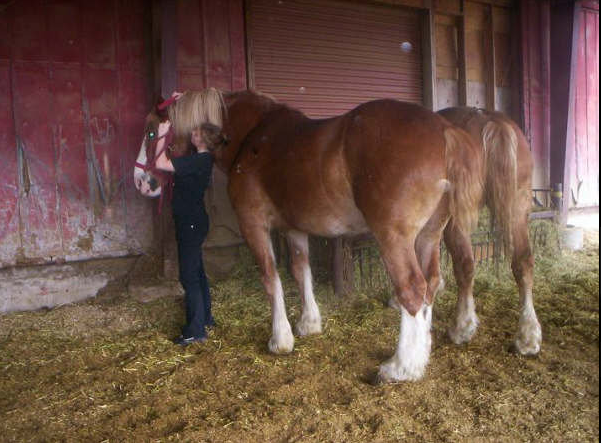 Here he is fresh off the street from working a busy Christmas season. 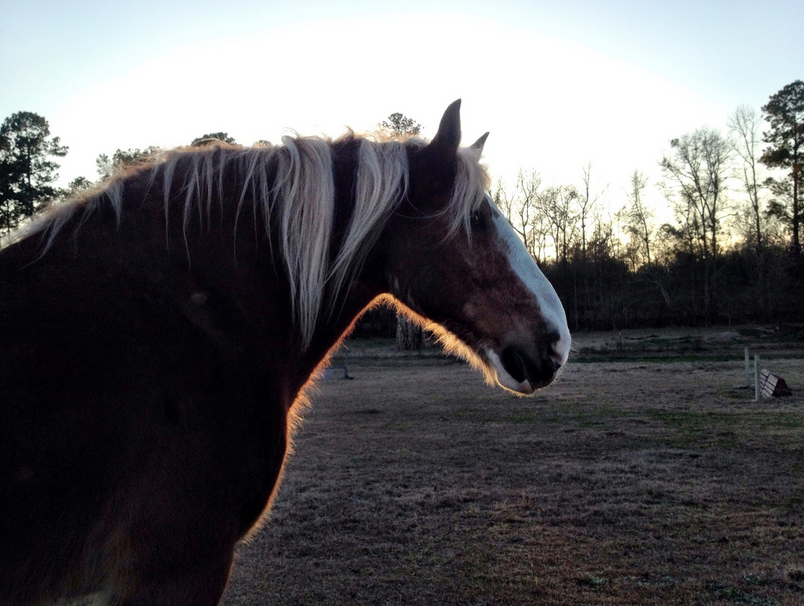 Look at his neck compared to Klein’s. Look at his head compared to the head shot of Klein below. Day and night. Yes, different breeds but I use his pictures because he’s mine and because there are plenty of Percherons that look just like Wes in their build. Photo by Stacey Chepren. 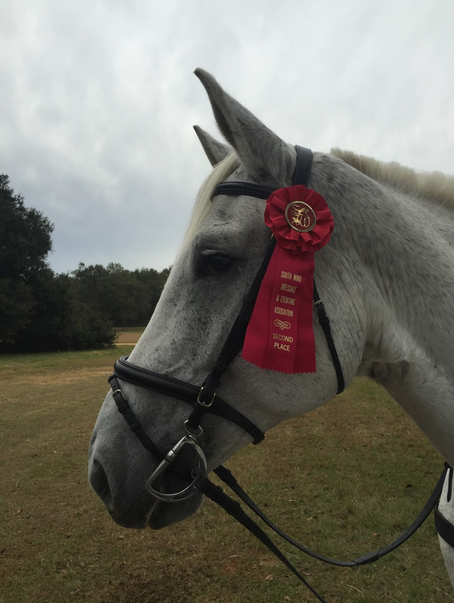 A good head shot. Not a particularly drafty head either. Photo by Stacey Chepren.

It’s easy to see that there are some drastic differences in drafts. But I will say, there is a reason that many crosses out there in eventer and jumper land are Percheron crosses. They are by far the most common draft cross. Did you know Percherons have Arabian influence way back in their breeding origin? Pretty interesting.

Am I saying, “I have the only athletic Percheron on the planet and the rest of you are out of luck”? No, absolutely not. I am sure there are others out there. I hope to bring a little education and perspective to the discussion, as well as encourage a little extra thought so Percherons aren’t put in situations where they don’t belong.

Want to read more about Klein the Jumping Percheron? Check out Stacey’s blog and follow her adventures on Facebook. Go Drafts! Go Eventing.