Sue Funkey organized a series of clinics in California last month with Lucinda Green and was kind enough to send us a report on how it went, along with photos courtesy of Jes Hargrave. Remember to send your clinic reports to [email protected] so we can all learn together. Go Eventing. 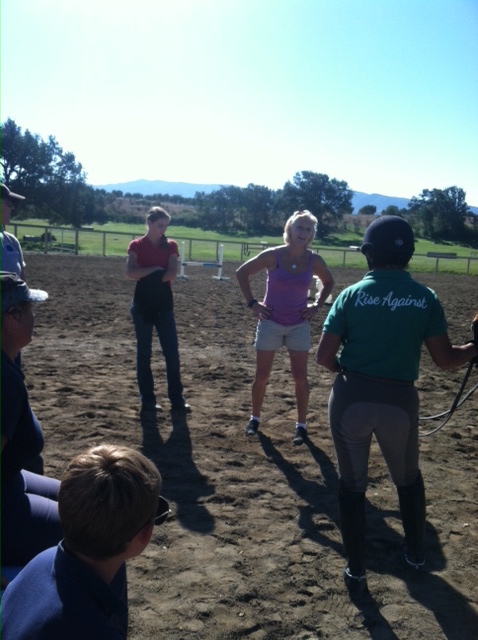 As a clinic organizer in Northern and Southern California, it’s hard work to get top talent’s time for clinics. Not only do I try to get known names with great teaching skills, but their schedule has to allow for a clinic to happen when our season has a down weekend. No easy feat, I assure you.

I was fortunate to be able to have Lucinda Green for a whole four days recently, half in Northern California at Camelot Equestrian Park and half in Southern California at Shepherd Ranch. As the organizer, I rode at both venues along with many others who had come to hear Lucinda’s words of wisdom.

We were not disappointed. She began by learning the rider’s skill level and their horse’s skill level. At no time did she ever ask something over the head of horse or rider. It was as if each one of us was getting an individual lesson from Lucinda. She taught us how to interpret our horse’s answer to the “question.” It was either a yes, a maybe or a no — and when we felt our horses’ answer coming up, we learned to ride accordingly.

She taught us how to envision our legs wrapped as tube around our horse, and when the question was being answered by our horse to use the tube of our legs to encourage or correct the response. Sounds simple enough? In theory, yes, in practice, no, but what a difference in the horse and rider’s confidence once the task was recognized and mastered.

Day two was in the field putting into practice the skills we had learned in the stadium phase. She reminded us our eyes are on our legs and what the leg feels is what the horse is going to do. The sooner we could set our horse up and know his “answer,” the more successful we would be.

We could always change the pace, but going over the jump was the main focus — always. Her favorite line was “I don’t care what it looks like as long as they jump the jump.” And isn’t that the most important thing after all?

Lucinda never stopped teaching. Always talking to the rider, with direction and suggestion and expecting the participants in each group to pay attention, as she knew the information she was imparting came from years of experience at the highest levels. She even spent time talking about riders the world over and their tack and why some of the equipment we use (often just because others do) is scientifically harmful to our horses.

She knows her stuff and has done her homework. She backs up everything she says with either her experience or who she has talked to and their recommendations. It is clear she knows the top people in many different phases of horsemanship and loves to learn and share knowledge. I can’t think of a time when so many learned so much.

Here are a few comments from the attendees:

Michael, who rode at Camelot: “In one of her chats, Lucinda had said that if the rider needs to let the reins slip to avoid banging the horse in the mouth, and the horse still has a jump to negotiate, the rider should widen his hands so as to maintain a contact, reducing the chance of a run out or refusal. Well, my horse stumbled on the island in the water and had to use his neck for balance. I let the reins slip, but he still had to jump back into the water and out, so I widened my hands and he completed the exercise without difficulty.”

Terry, who rode at Camelot: “She exceeded all of my very high expectations, and I was amazed that under her direction my Beginner Novice horse that is NOT known for steering or ‘cattiness’ was confident jumping the stadium arena gymnastic, the 4-foot wide skinnies without benefit of standards or wings AND the barrels over the down bank into water. I feel that my horse and I progressed a year’s worth of knowledge in just two days.”

Lauren, who rode at Camelot: “I am from a rural town in Oregon. I have very few jumps to work with but lots of open country. I own a 5-year-old American Warmblood I bought at 2 1/2 years old who was only broke. We have come a long ways with what we have to work with. We completed two Beginner Novice events this past summer before the Lucinda Green clinic. Lucinda is the first person that helped me with Image.

“Over a two-day clinic, she helped build his confidence immensely on cross country and in the ring. She is an amazing individual and really helped me remember that I have to keep contact with the horse’s mouth no matter what the situation is. Also, because Image is still young as a 5 year old, she told me I need to make sure he feels my contact every step of the way. I have done one other clinic with her before back in 2004, and I would hands down love to see her come back to Area VI!”

Betsie, who rode at Shepherd Ranch: “Where to begin about one of the best clinics I have ever attended. Lucinda was world class and not just as a rider. She took the time and notes to learn our names, horses’ names, experiences of both rider and horse as well as weekend goals and challenges. She tailored each division and each set of exercises to the horse and rider and never ever made us feel that what we were doing was beneath her.

“She would correct where necessary as well as praise, giving all of us the reasons for both so that we were constantly learning. Her coaching was continuous all throughout the day, so that no matter if it was your time to ride or not, you were learning just by listening. The weekend was incredibly hard and challenging, and good for her for making it that way! It was impossible NOT to learn. She genuinely loves teach.” 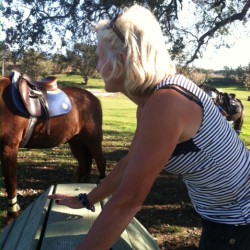 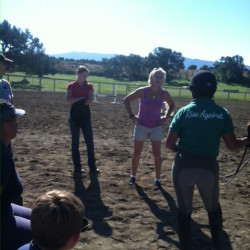 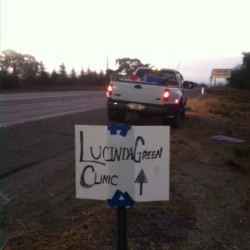 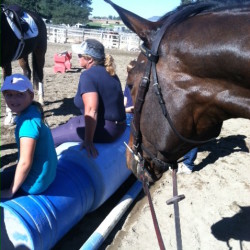 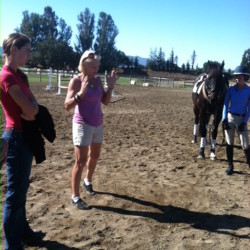 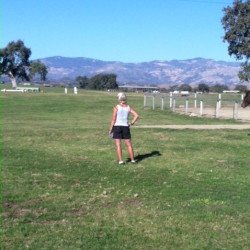