In this excerpt from Denny Emerson’s book How Good Riders Get Good, US Eventing Team member Sinead Halpin Maynard shares the reasons for her success in the saddle. 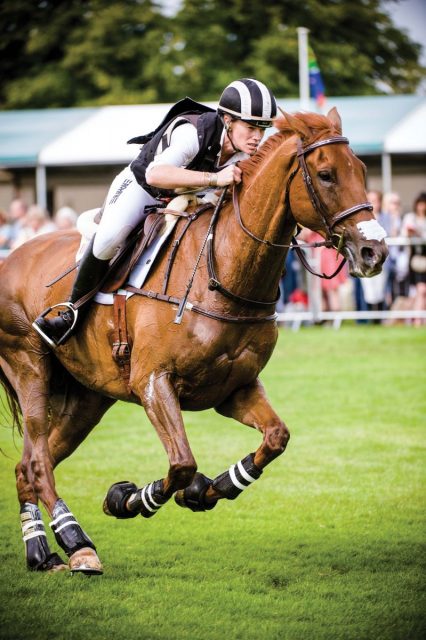 The first major win of Sinead’s competitive career came in 2005 at the National Championships at Radnor. She was a member of the silver medal-winning Nations Cup Team in Holland in 2010, was the top American at the Kentucky Three-Day Event in 2011, and was the first alternate for the US Eventing Team in the 2012 London Olympics. Sinead represented America in Normandy, France, at the World Equestrian Games in 2014, and was named the alternate for the team for the Rio Olympics in 2016.

Life circumstances: Both of my parents emigrated from Ireland. My mother grew up with horses and ponies as part of life when she was young in the country. My father grew up in Dublin with little education and nothing to do with horses. They moved to the United States in 1980.

Hooked on horses when: When I was six I begged for lessons, and my mom was keen on the idea of horses coming back into her life. Over the next few years, weekly lessons turned into a full- on passion, which both my parents encouraged. We were not a wealthy family but my parents believed in following your passion and working hard.

I think I got good because: I think my parents’ influence is a strong reason for the success I have had, as well as impacting my approach with horses. A strong work ethic and a good attitude was mandatory from my mother in the barn—complaining was not a thing that was accepted. My father grew up one of ten kids, raised by his mother and sisters as his father passed away when he was not yet a teenager. He worked every job available throughout his life. To him, there was no time for excuses, just time to jump at any opportunity and see where it might lead. My parents worked incredibly hard to enable me to have a horse. They never told me no; they just said if you can figure it out, go for it. Because of this, I have always felt if I worked hard enough, anything is achievable.

Being a working student has had a huge influence on my life. I started working in professional barns at a very young age. I got to see what the life of a professional looked like. I got to work with beautiful horses, and although I worked for great riders, I also benefited from working directly under great grooms and barn managers. I learned how to listen to and watch the farriers and vets. I got to see how integral the relationships with stable owners and sponsors were in the well-roundedness of a program. The quality of the team around you weighs heavily on your chances of success.

My most important advice: You should be able to put your head on your pillow at night and feel you have done your best with the horses and the people around you. If you wake up in the middle of the night not certain you have done right by a person or a horse, fix it…do not become a victim of it. Educate yourself. Seek out help from the people who inspire you; read, write, and believe the learning is in the struggle…and embrace it.

This excerpt from How Good Riders Get Good by Denny Emerson is reprinted with permission from Trafalgar Square Books (www.horseandriderbooks.com). 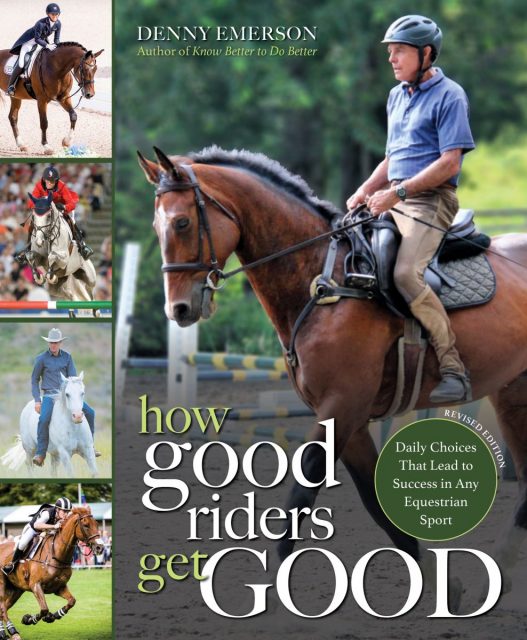 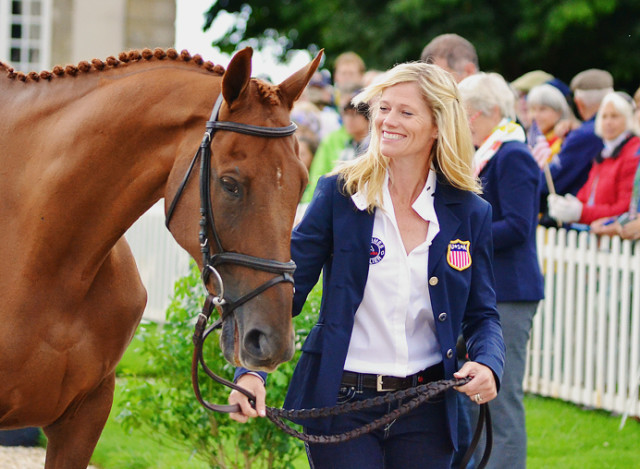 It seems to be the year of great horses retiring and it is with a proud yet heavy heart that my syndicate members and I announce the retirement of Manoir De Carneville, Tate.

It is one of the hardest decisions in a horseman’s life to decide when a horse’s competitive journey has reached its limits. After 30 FEI starts, six four-stars, 18 three-stars and five trips across the pond, our team has collectively decided that time is now.

For those who know Tate, let me assure you that his colorful personality is still shining bright. While the scenery has changed, he relives his glory on the jog strip daily, dragging whomever drew the short stick, hand grazing or more hand bucking, across the fields. Like clockwork, if a car drives by or even a bird flies too close Tate is squealing with all four legs above the ground and me hanging on to the neck strap!

Some things never change, but age and a few chronic injuries are catching up to Tate physically and the maintenance required to keep him fighting fit is becoming excessive and uncomfortable for all of us responsible for his well-being.

My relationship with this horse began a decade ago when Jim Cogdell graciously purchased Tate for me as a raw 7-year-old in 2007. Tate quickly rose to expectations and in 2009 was named to the U.S. High Performance list for the first time. He would remain on this list for the next nine years.

In 2010, Tate represented America for the first time on the Nations Cup team in Holland at Boekelo finishing with a silver medal.  Then in 2011, contested his first four-star at Rolex where he finished as Rolex/USEF National CCI4* Champion in the third place position.

A year later, Tate flew to England and had the honor of serving as the first alternate for the 2012 London Olympics. It was during this time that the support of the American eventing community became a real part of Tate’s life and a driving force behind our success.

The letters, texts, and messages of support and encouragement became part of our story and kept us fighting throughout the next stages of his career and our partnership. After the 2012 Olympics, Tate went on to finish second at Burghley, achieving the highest American finish in 18 years.

It was at this point in Tate’s career when the Manoir de Carneville Syndicate was formed. Syndicate members Christine Turner, Tim Holekamp, Margaret MacGregor, Brian Callanan, Kristin Michaloski and Bernadette Cogdell came together to secure the horse for America with the hopes of him representing Team USA at the World Championships in 2014.

The syndicate’s support changed the game and fueled Tate to return to Rolex again in 2014 with a fourth place finish that successfully landed him on the 2014 WEG squad. Tate and I returned to Rolex in 2016 where we finished 10th which positioned us as alternates again for the Olympics for Rio in 2016.

I could spend paragraphs more listing Tate’s stats and accolades, but the most important thing this horse has done cannot be represented by a number or a ranking. Without knowing it, Tate has been an inspiration to me, to all those who have worked with him (or for him) and ultimately the country who has watched and supported us through the highs and lows of his career. He has left a mark on a lot of hearts. He has shown vulnerability, resilience, fierce determination and at the end of the day he has always shown up for the job asked of him.

My husband once said, “A great horse would jump through fire for you if you asked and a great horseman would never ask.” The thought of putting Tate into a position that he physically could not handle would break both his spirit and mine. These words helped us all find peace and comfort with this decision.

I look forward to having Tate around the farm as Team Mascot and I’m sure Ill enjoy some hacks that are more exciting than Burghley! If the working students are lucky they might even get the occasional lesson on him! But mainly Tate will get to rule the farm and judge all the youngsters coming up … that flared nostril seems to say it all!

To Jim and Bernadette Cogdell, Christine Turner, Tim Holekamp, Margaret MacGregor, Brian and Annie Callanan, and Kristin Michaloski thank you for the years you spent supporting this team. It is a huge commitment financially and emotionally to be a part of U.S. eventing through horse ownership. Everyone on this team took their role to heart and Tate’s successes directly reflect the hand each of you played in his career.

To Tate’s grooms, Chrissy McBride, Megan Kepferle and Lynn Garvin, the words thank you will never be enough.

To our team of vets and farriers, thank you for treating Tate and I like family.

To Tate, my beautiful horse and forever partner, you have changed my world. I have no idea what forces brought us together but together we have traveled the world, pushed each other for greatness, picked each other up in weakness and together achieved things I only dreamed possible, thank you with all of my heart.