Tik Maynard’s new book, In the Middle Are the Horseman, comes out from Trafalgar Square Books in June 2018 and is currently available for pre-order. Earlier this week we previewed the book and caught up with Tik for a Q&A, and now we are excited to present a two-part series of sneak preview excerpts to tide you over until the book arrives next month. If you missed it, read Excerpt I here. 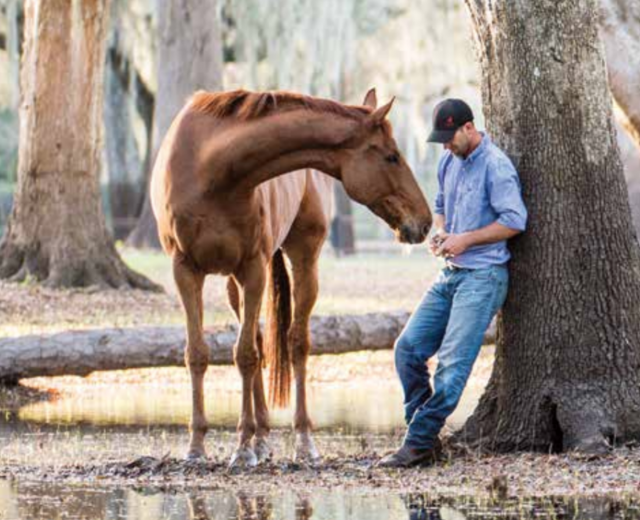 I glanced down. I saw the sweat from my face fall on Sapphire’s withers. It mixed with hers and slid to her shoulders. Her neck foamed where the reins rubbed against the skin. Drool from her lower lip fell, caught by the wind. We were two strides farther before it hit the ground. I was back in Canada, on Vancouver Island, in full gallop, home from Germany, and enjoying an intermission before heading to Ocala, Florida, to work with Karen and David O’Connor. I looked ahead the way a soccer player looks downfield before chipping the ball to a teammate. Eventing. Eventing! So this is what it was.

This was a thrilling and wild affair. My parents watched cautiously. It seemed they had hidden this great thing from me. What! How? Now they offered advice timidly. My friends didn’t know where I was. But this was no fling; it was love. It snatched me from my home. It arrested yesterday’s desires and replaced them with new purpose.

I had no idea where this sport might lead me. Would I end up living in Germany? Or maybe competing in Ontario or the Carolinas? But I was getting ahead of myself, and that was the one thing, perhaps the most important thing, I should not do in this situation. I smelled the air, fresh from the Pacific Ocean. Sapphire’s hooves struck the ground like the thunder of timpani, and we galloped on.

I was halfway through my first course, wondering what I had been doing my whole life before now. I looked to the left—a cord of wood blocked my entrance to the forest. I continued on, my horse’s legs flew in double-time, straight and true, and we turned to be perpendicular to the obstacle. And then we were up and over, and on a new trail. The trees rushed by! A blur. I knew they were evergreens, but they might have been fir or juniper or hemlock. The browns and greens blended together. We sped through; then we were out on the grass again.

The ground was firm, but not too firm. Dry, yet not too dry. Green as the emerald pastures of a picture book. I had no idea that footing like this was not just great—it was rare.

In my childhood, riding happened in a ring. Both my parents were my coaches. My mother showed me the joys and principles of riding as an amateur. My father explained the obligations and responsibilities of the professional. Although they had both evented themselves, they quit when my mom was expecting.

“Too dangerous,” they explained when I was fourteen, “too many crushed bones.”

“Too many shattered hearts. Eventing is like trying to outrun a train: eventually it’ll catch up to you.”

“Sure,” I’d replied with a laugh. “But don’t worry, I can leap tall buildings, too!” And I hurdled, and tripped, over the couch. The truth was, I was not really interested in eventing—at least not back then.

“You think I’m worried about you? No way!” my mother had said, shaking her head. “It’s the horses. They don’t deserve that.”

Fifteen years after that conversation I found myself at my first event. And my parents were there to support me…

And then there were the two water jumps, the first that left me behind, but the second that was smooth. My leg swung slightly forward, I landed in my heels, and I found my horse’s mouth again. Below us the water splashed, cooling her chest, leaving a tiny rainbow in our wake. And then we were off.

We looked ahead. The Cowichan Valley rose up on my left. There was forest on my right. We rushed forward.

Spectators sat on the hill. They held dogs. They looked for photo ops. Sometimes they held their breath. I saw all these things, and I saw none of them. The stirrups held me high, out of my mare’s way, but her breathing was more labored now.

The finish line came up. There were two flags marking it: red on the right, white on the left. I crossed through and forgot to glance at my watch. I was breathing hard, along with Sapphire. The stewards glanced at their clipboards. The vet was busy with other competitors. Sapphire put her head low, but her ears stayed pricked and forward. Someone took our photo.

Later I would notice that in the picture, I was smiling. 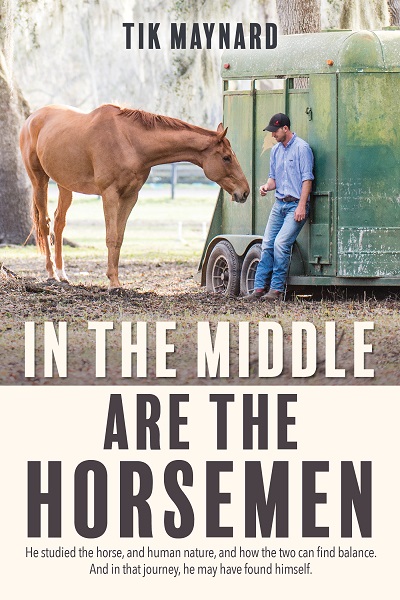 Tik Maynard’s new book, In the Middle Are the Horseman, comes out from Trafalgar Square Books in June 2018 and is currently available for pre-order. Yesterday we previewed the book and caught up with Tik for a Q&A, and now we are excited to present a two-part series of sneak preview excerpts to tide you over until the book arrives next month! 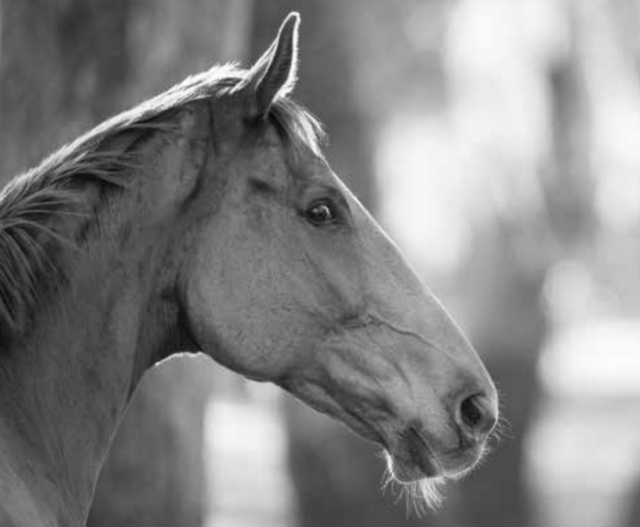 “I would have done that a little differently,” Bruce said, as he shook his head. “I would have gone slower. It’s not a race. And when you do get the rope around his neck, make sure you leave out more slack.”

I nodded. The horse kicked out as he cantered away from us.

“Right now we just have to catch him,” he continued. “One try with the halter is enough. We just want to get him out of here as calmly as possible. It should be whatever is easiest for the horse. Later, when he’s settled in at my place, we can start with the real work.”

The gelding was now at the far end of the ring, looking straight back at us. One ear was forward and one back, then they switched. But both eyes never left us.

Bruce went to the middle of the corral where he had left his rope and picked it up.

“How we get him in the trailer now depends a lot on what kind of space he’s in. With this size here, the lasso might work best.” He let the rope slide through the honda knot, creating a cylindrical loop a couple of yards in diameter.

“If you keep him at this end, I’ll see if I can throw this over him.”

“Sure, no problem,” I said, but I was a little skeptical, both of Bruce throwing the loop over the horse, and of this being the best tactic to take in order to quietly catch him.

Bruce walked down the middle of the corral, directly at the gelding. The lasso knocked against his thigh as he moved. He stopped about fifteen feet from the horse. I stood on the left side of the ring, so that if the horse moved we knew it would be to the right. Bruce brought his lasso into a slow swing over his head.

There are many kinds of throws, and I had learned three: the overhand, the houlihan, and the backhand. Bruce was planning a simple overhand. The horse saw the rope move and bolted down the fence. Bruce didn’t hesitate. Once more the lasso went behind the man’s back, picking up speed, before leaving his hands and moving, slowly it seemed, toward the fence, slightly ahead of the gelding. The horse galloped on—straight into the trap. As the rope settled around his neck, his speed and momentum tightened it, but he continued down the fence.

Time seemed to speed up. Bruce madly played out rope, letting the horse gallop, giving him a chance to feel the rope and the easy tension in it. I tried to stand out of the way behind Bruce. He let the horse circle the corral twice and settle.

“This is a lot different than roping cattle!” Bruce yelled to me, coiling in the rope.

I thought back to the afternoon when he had taught me how to rope. Bruce showed me the simple overhand first, then the backhand from different angles, and finally the houlihan. He demonstrated the scoop toss and del viento, but I stuck with the basics. I learned how to switch from the backhand to the hula, but how it’s impossible to go from the hula to the backhand. He showed me how the scoop toss soars into the air like a dove freed from your hand, returning to the earth in a deadfall, until suddenly, when the calf steps into the trap, you pull on the rope, and the scene unfolds in double time, the rope quickly, suddenly, ferociously, alive.

After that lesson, when Bruce had left, I had kept practicing. It was hard enough on the ground; I couldn’t imagine riding at the same time. But I had liked the feel of the rope in my hands and set up a bale of hay on its end, playing with the different roping shots until dark.

“Tik,” Bruce said, breathing hard now, “I don’t call this ‘natural horsemanship.’ Once he’s got that rope around his neck, or a halter on his head, that ain’t ‘natural’ anymore.”

The horse turned his head to the outside of the corral, looking to get away from the tension he felt encircling his neck. There was sweat glistening along his flanks. He broke into a trot. Bruce was watching, ready to release the pressure as soon as the horse took one step toward us.

“Look at it this way,” he said, gesturing to the left with his head while managing the rope. “Over here are the ‘natural horsemen.’ And often there is nothing natural about what they do. And over there,” he nodded to the right, “are the, well, whatever the opposite is—the people who don’t take into account the horse and what its capabilities and tendencies are.” Bruce paused for second, thinking. “There are lots of those guys, I guess. In the middle, though, are the horsemen.”