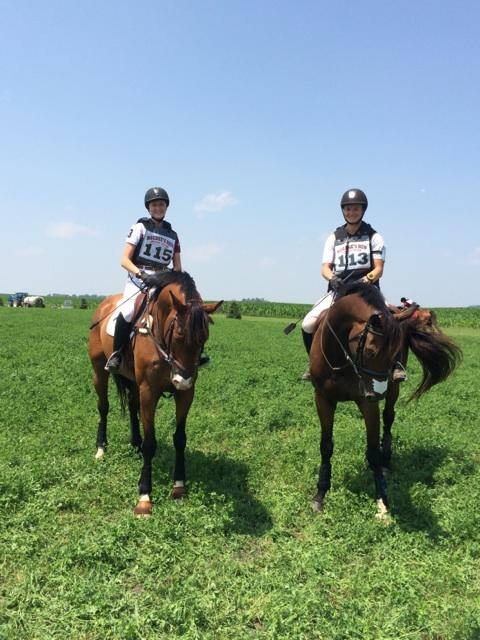 My student, Heather, and I after two great cross country rounds on young horses.

Well it’s been a while since Bromont, and I’ve meant to blog several times.  However, having what could easily be considered a parade of young horses to get back to, I’m not sure where all the time has gone.  In the last six weeks, I have had three four year olds, two five year olds, a six year old, and a green nine year old to work with, so needless to say I’ve been busy!

Last weekend, I took three of the youngsters up to Roebke’s Run for my first time, and I was beyond impressed.  There’s a handful of events in Area IV that really go above and beyond – constantly changing their courses, keeping everything manicured beautifully, trying to impress and retain competitors with great prizes, and creating atmosphere.  It is safe to say, Roebke’s has cemented their place among these gems of Area IV.

I had one horse in the Training division, and two in the Beginner Novice.  While the courses were big and technical, all three of the youngsters really enjoyed the tracks and came off their runs feeling confident and more educated.

Show jumping was quite large for all the levels, but again my horses had some of their best rounds to date.  I’m always thrilled when my horses come away from a show better for having been there.  However, I was most impressed with everyone working to make the event as competitor friendly as possible at all times, just a few examples come to mind.

1) The morning of dressage, it monsooned and the dressage rings got pretty slick.  The large ring had minimal use and had held up better as a result.  When the small ring I had been competing had deteriorated, everyone rallied to get the large ring converted and did so without and significant time delays.

The next class of horses had a much better go all because the volunteers and people running the event were willing to be flexible and bust their butts for a few minutes to improve the competitor experience.

2) In regards to footing, the path from stabling to jumping got chewed up pretty quickly with all the rain.  Almost immediately, there was a vehicle filled with gravel and a bunch of hard working people making sure this path would hold up.  Let me reiterate, this is not a competition or even warm up surface, this was just where we walked to get from one place to another!

3) I had a ton of horses competing close together, three in two divisions of Beginner Novice between me and my student.  Nancy as always did an incredible job with scheduling to make sure I could get everything done.  When things did get a little tight, all of the ring stewards were accommodating and cross country even had a second sound system in warm up to keep everyone running on time and informed.

While everything was beautiful on the facility, my biggest takeaway was that I felt like an appreciated customer.  The organizers at Roebke’s Run recognize that they are offering a service and did everything plus some to make sure I would want to be a repeat client, which I will most certainly be.  If the experience wasn’t enough, I won $75 off my next entry with my six year old winning the Training Horse division which is plenty to entice me!