There is no better way to experience our North American Junior and Young Rider Championships than through the eyes of an eager competitor, and so we are delighted to introduce Hannah Stohr as one of our official guest bloggers! The past week was the culmination of years of hard work for the next generation of upper-level eventing riders and a unique experience that incorporates teamwork into an otherwise very individual sport. If you’ve been to NAJYRC, you know how special it is, and if you haven’t, we’re hoping to show you through Hannah’s experiences and blogs. 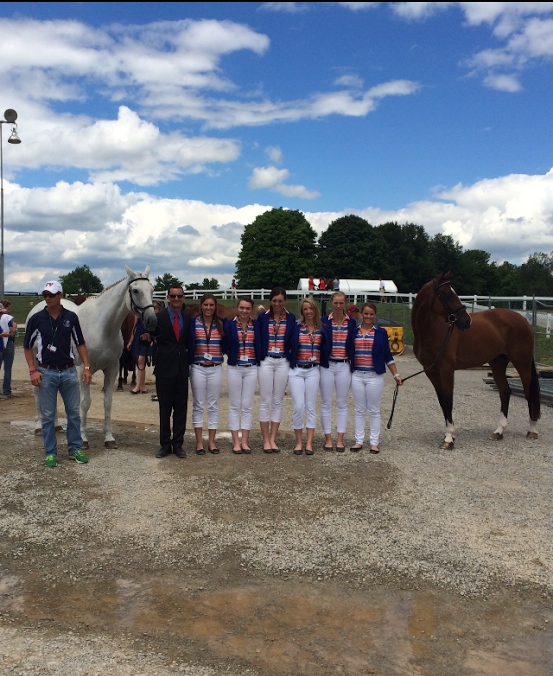 The whole Area IV team after the first jogs. Photo by Laura Bulgren.

Hey EN! The NAJYRC 2014 is officially over! The week was filled with tons of fabulous riding and well deserved medals from all disciplines. Although my weekend did not go as planned, the rest of my team had stellar performances to just barely finish outside the medals.

On Wednesday, jogs passed without incident for Area IV. We looked fabulous, our horses were shining, and best of all, everyone passed on the first trip down the runway!

The following morning, we continued to kick butt and take names. The Area IV one-star team managed to win the first day of dressage by posting four scores in the 50s, three of those being below 52. Kristine Burgess and BFF Tiara were the first out Thursday morning for the Area IV team and the second rider of the morning. She posted an absolutely beautiful test for a score of 52.9.

Melaine Rousseau and Menai Creek were next up, performing as individuals. They laid down the best test of their careers for a 50.8. Elena Hengal and Zipp came a little bit later in the morning. Although their test had a bobble or two, they really nailed the rest of the movements to earn a 50.6.

I was next up to go, and Hey Jude warmed up great, but we got into the arena and he decided to be a little tight. He isn’t the flashiest guy, but we managed to squeak out a 57.3.

Becca Gall and Can Ya Dig It were the last out to represent the team and laid down a foot perfect 50.2. Patrick and Steely Dan finished their test with huge smiles to score a 66.3. Autumn Schwiess and Oakport Strauss had a fabulous test to sit in fourth overnight on a 54.5.

One of the most exciting parts of the day for the Area IV one-star team was getting to attend the press conference. We got to sit in front of the fancy back drop and answer questions just like the pros do!

Cross country day dawned cloudy and wet. Apparently it hasn’t rained at all in Kentucky the entire summer, but after how much it rained when we were there I have a hard time believing it. Kristine and Tiara hustled out of the start box at 8:04 am. They had a scrappy round, but came home safe with a only a few time penalties. Coach Jon Holling had told us all to just jump all of the jumps, regardless of how it looks and props to Kristine for going out there and getting it done!

Melaine and Menai Creek’s round unfortunately ended in elimination after two stops at the Head of the Lake and then one more at a later turning table combination. Both were okay, but justifiably disappointed. Elena and Zipp’s round went amazing from what she told me, and they knocked the course out and posted the quickest round for Area IV.  Elena later told me her favorite moment was the jump into the Head of the Lake because Zipp nailed it!

My cross country day unfortunately did not go as well as the others. After fighting with a heavy horse for the first half of the course, Hey Jude and I got hung up on a seemingly innocuous table after a miscommunication on take off. We parted ways with an unfortunate deployment of my air vest (I love safety, but the suffocating sensation isn’t always awesome).

Thankfully he and I both are perfectly fine, it just wasn’t how I wanted my weekend at the Kentucky Horse Park to end. But hey, that’s eventing for ya! Becca and Can Ya Dig It posted a fabulous clean jumping round with time shortly later. Digger had some big jumps into both of the water complexes, but they recovered nicely both times. 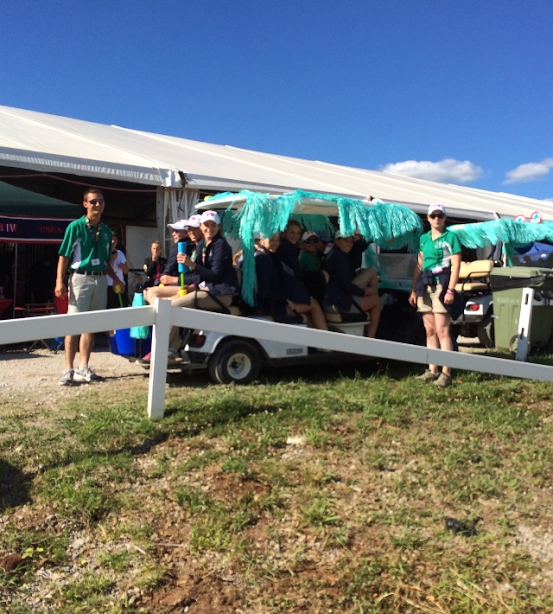 Our two star riders had mixed results. Autumn and Oakport Strauss came home after a stellar trip across the country to sit in third over night with just a little bit of time. Patrick and Steely Dan did not have the best of days when Danny tripped and fell in the first water complex. It seemed that Danny just tripped harmlessly over himself and both returned to the barn with minor scrapes.

Stadium day started early and tense. Final horse inspections loomed and it seemed best to let grooms and riders have alone time with their mounts. The second horse inspection is one of the most stressful parts, if not the most stressful part, of a CCI competition. But, one by one, all 4 of our remaining Area IV riders trotted down the lane and each were followed by a resounding “Accepted!”

Show jumping started a little late in the day and it got warm. Kristine and Tiara were the first up for Area IV and they had a neat round, only having one rail roll out of the cups. Becca and Digger’s round was going lovely until he tapped the first part of the triple, taking four faults with him. Elena was the last to go, and she held Zipp together for a steady and clean round, but unfortunately incurred three time penalties. When the dust settled, Area IV had been left out of the metals by a measly 5.4 points.

Autumn went later in the day for the CCI2*, and pulled two heart breaking rails to still finish in good fashion in 5th place individually.

This week was unforgettable and the amazing people who helped get us through deserve a thanks! Brewster Walker was our Chef d’Equipe (aka mother hen), and he kept all of us in line. Jon Holling was our faithful coach and always the source of a good laugh. Erica Hoffman was our organizer and helped get equipment where it needed to go and made the schedules.

I also must give a shout out to Area IV for allowing us to represent them and thank you to all who cheered us on at home! And lastly I must thank our grooms and support staff (aka our lovely mothers), who’s help was invaluable this week. And now I will tap my ruby red heels together and head home, Toto! There’s no place like home.

Congrats to all who took home medals this week and go eventing!