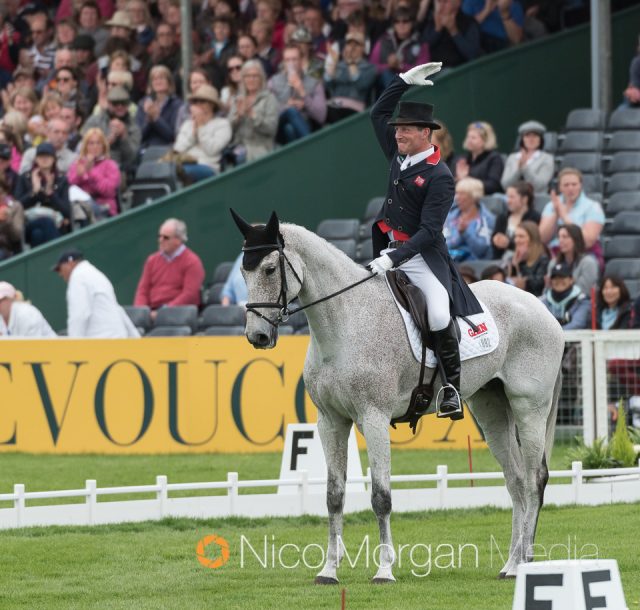 Oliver Townend and Ballaghmor Class leave nothing behind in their test. Photo by Nico Morgan Media.

Shun the nonbelievers who say that dressage is the boring phase: the conclusion of today’s competition proved otherwise today, as we saw some of the best scores we’ve ever seen at Badminton and the pressure at the top went into overdrive.

It was to be Oliver Townend‘s day, as he and Burghley winner Ballaghmor Class posted a remarkable career-best dressage score of 20.8 to take a definitive lead going into tomorrow’s cross-country. Whether we’re looking at it in new money (20.8) or old (31.2) this is a serious mark – and it very nearly equals the record set here at Badminton 18 years ago by Andrew Hoy and Darien Powers (20.5 in the new scoring, or 30.8 in old).

“I’d have settled for a bit less!” he laughed after his test. “He’s still a baby, really – still weak in some ways, and so it’s a lot to expect of a relatively young horse to ask them to relax in their mind and body in a situation like this.” 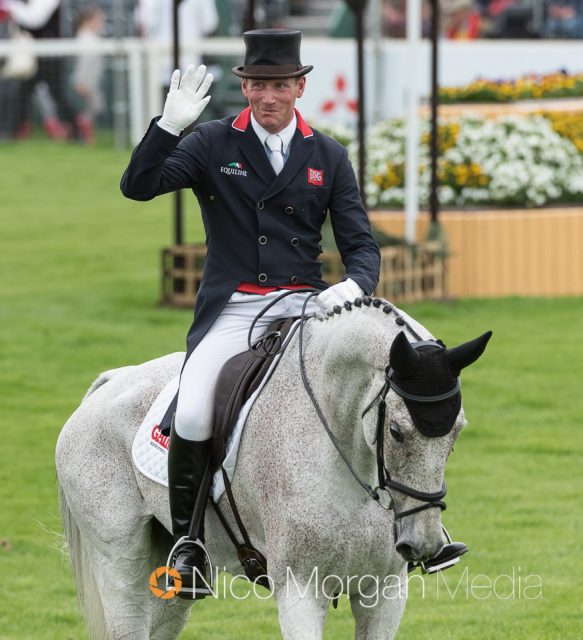 Ballaghmor Class shows what he’s made of with Oliver Townend. Photo by Nico Morgan Media.

There were some doubts creeping into Oliver’s mind prior to ‘Thomas’s’ test, too.

“The second time at this level is quite often a horse’s worst result,” he said yesterday. “The first time, they tend to get nervous in the atmosphere and rely on the rider, but the second time, they’re expecting the atmosphere. This time around he knows he’s a superstar – after Burghley, he was the only horse on the yard that the girls wanted to muck out.”

Despite working well yesterday afternoon, Thomas lost some of his sparkle in this morning’s schooling session. 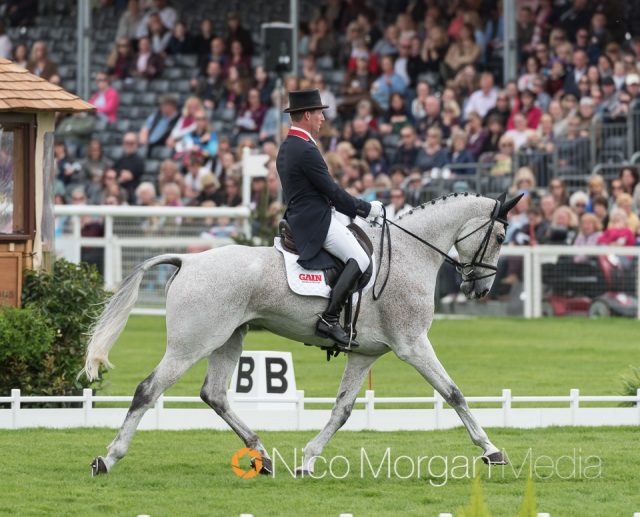 “We weren’t overly impressed with his work this morning. He felt like he did in the test when he worked yesterday, but this morning, I don’t know if he was sick of work. But in the test, I felt like we were in control of every single stride. This is the second time he’s seen the crowds in a test, and you don’t always know how they’ll react, but he was on side the whole time. I’m seriously happy with him- we know what he’s capable of and he’s improving all the time; he’s improved a lot, physically and mentally, since Burghley.” 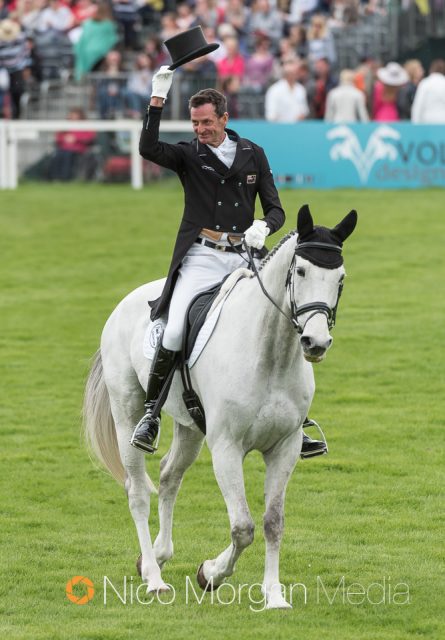 Overnight runner-up Mark Todd posted his best top-level dressage score in more than ten years, scoring 23.4 with the relatively inexperienced Kiltubrid Rhapsody. The eleven-year-old gelding recorded his first four-star start last year at Pau, where he clocked up an unfortunate 20 penalties, which Mark attributes to rider error. This year, he hopes to go better.

“I’m absolutely thrilled with him – it felt like he didn’t make any mistakes, and he’s starting to get the stage where he can really carry himself,” he said. “It feels like he’s still got more to give; another year on him and he’ll be really smart. Because he’s so big, it’s taken him a long time to get to this point. I’ve only felt in the last month that he’s started to use himself well.” 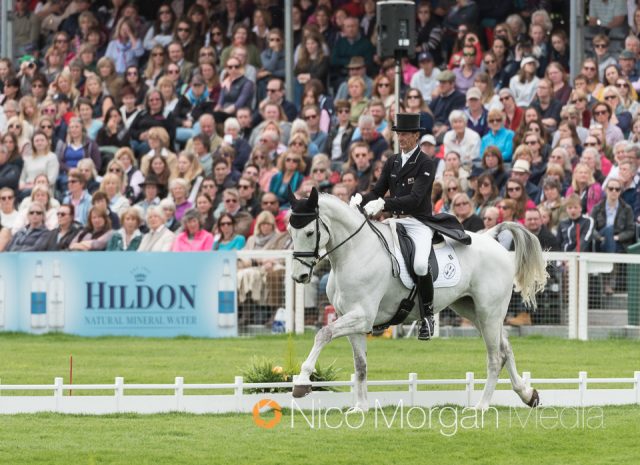 Mark, who squeezes in training sessions with dressage supremo Charlotte Dujardin, spent much of his day watching the riders before him.

“The marks seemed to be getting better and better throughout the day, and it seemed to be a bit of a lottery, but we’ll take it!” he laughed. 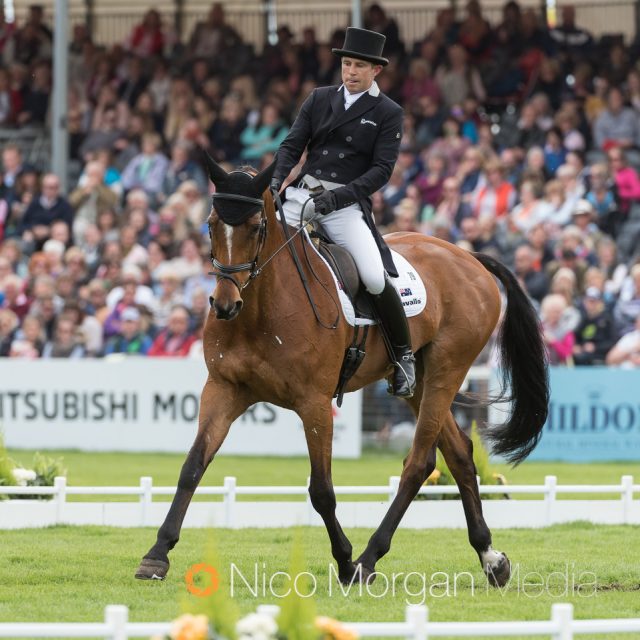 Australia’s Sam Griffiths and Paulank Brockagh, who won here in 2014, posted a good score of 24.4 to sit in equal fifth place with fellow countrymen Paul Tapner and Bonza King of Rouges.

“She isn’t really a natural at the dressage, but she tries really hard,” said Sam. “It’s just ironic that the dressage scoring has changed just as I’ve got her really good at the dressage! She’s got better and better over the years, but she’s always been consistent.”

The pair train with Australian dressage rider Gareth Hughes, who also trains fourth-placed Jonty Evans. Looking ahead to tomorrow’s gruelling cross-country test, Sam is feeling lucky: “I’m on the one horse that the rain won’t really affect too much.” Their win here was recorded in one of the wettest years in recent history and ‘Brocks’, who was fourth at Rio and came in the top ten at Pau last year, has proven her toughness and adaptability time, and time, and time again. 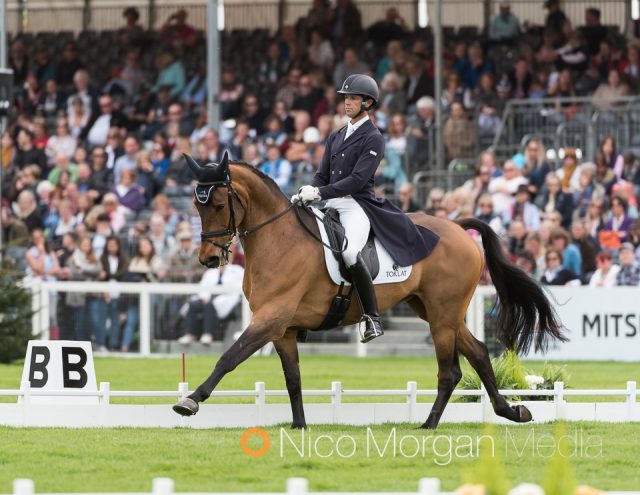 Will Coleman and O’Brien Office Supplies O’Reilly (no, we’re not kidding) are best-placed Americans in seventh place on a 24.6. Photo by Nico Morgan Media.

Will Coleman and OBOS O’Reilly are our highest-placed American combination after the dressage, showing a serious improvement in this phase.

“He’s a bit of a Jekyll and Hyde,” he laughed. “He’s incredibly bold cross-country but can get a little shy in dressage, and this is one of the biggest atmospheres in the world. We’re thrilled with him – dressage hasn’t always been one of our strengths, but he really pulled it out of the bag today.”

“I’m probably the most surprised guy here – I’ve been working hard on his dressage, but Michael is one of the best in this phase, and that horse is probably the best horse. It’s been a long road with this horse – I would have given him to you for about a ham sandwich a few years ago, but it’s amazing how they can develop.” 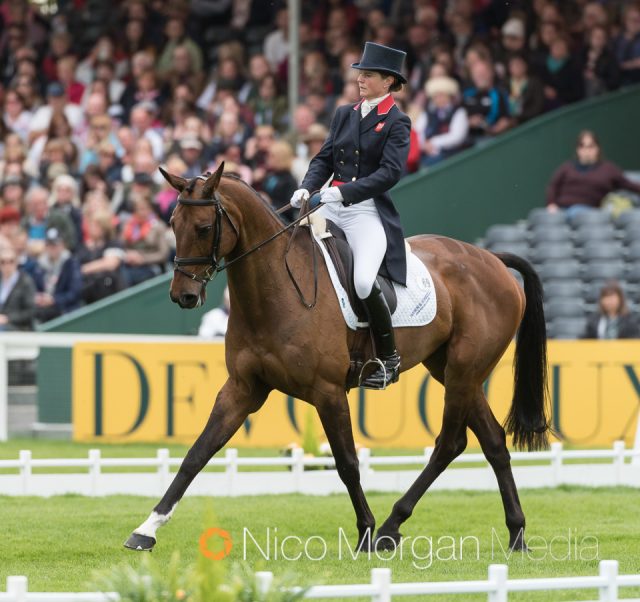 Piggy French and Vanir Kamira round out the top ten. Photo by Nico Morgan Media.

The fringe of the top ten is held jointly by Lauren Kieffer and Piggy French, who rides Vanir Kamira. They each sit on a score of 25.1.

“It’s really exciting,” said Piggy. “It’s just great to be back at the top level, especially at Badminton, as it’s the biggest event in the world. I was delighted with her score – I’d take that every day of the week!”

Her well-scoring test came despite a less-than-ideal warm-up: “I don’t usually give her more than twenty minutes to warm up, as she gets quite twitchy if she starts to get hot and sweaty, and she’d already done a lot this morning. But the last time she was in this collecting ring was two years ago, when she was getting ready to showjump, and she was a nightmare. We aren’t allowed to work in here during the week because they want to save the ground, so when we came in to warm up she immediately thought of the jumping and went white with sweat. I thought, ‘I’ve been here for three days – how can I have prepared so badly?!’ I haven’t been feeling great this week and I really thought she was got to blow, so I thought, ‘bugger feeling not very well – I’ve got to concentrate.’ She sneezed a few times coming up the centreline because she was hot, and so she changed behind in her entrance, but she settled so well and became so rideable.” 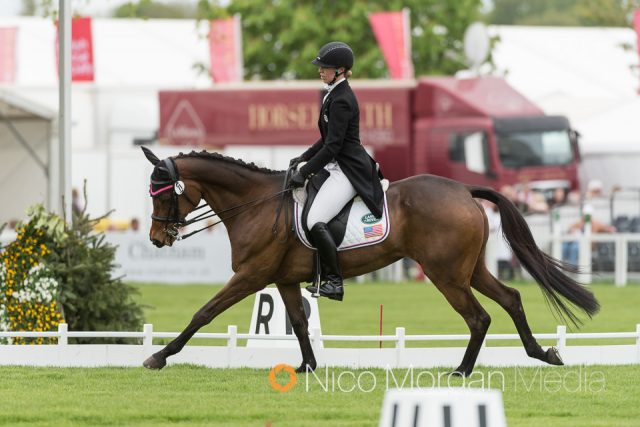 Madeline Backus and PS Arianna post a 39 in their Badminton debut. Photo by Nico Morgan Media.

Our final American competitor today was debutante Madeline Backus, riding PS Arianna. The pair have been based in the UK since March at Austin O’Connor‘s Attington Stud, a trip which has been funded by the Wilton Fair and Rebecca Broussard grants.

“It’s definitely a bit electric in there, but it’s amazing,” enthused Madeline. “She’s a very tense horse and dressage isn’t her strongest phase, so I was very pleased with her. Everything’s a bit closer to the ring in here than at Kentucky, where we did our first four-star.”

Madeline, who trains with Eric Duvander, Gill Watson, and her mother – “she oversees it all, because she knows us both so well!” – is looking ahead to the mare’s strongest phase: the cross country. Beyond that, she has Burghley in the back of her mind for the horse with whom she’s grown up.

“I’m really excited to get out there; I think running at Burnham Market and Belton really helped us to prepare. She’s such a funny horse – when you groom her, she’ll groom you back, and she loves treats. I was a kid when I raised her, and that’s the type of horse she is. Then she’s very serious about her job – a bit spicy and fiery.”

The top ten going into tomorrow’s competition is truly international, with six nations represented. It’s incredibly tight, too, as we once again witness the significant impact of dressage without the multiplier: in fact, just 16 seconds separates the top 20. We’ll be publishing a full preview of the course, with a seriously exciting mystery guest, before the start of tomorrow’s competition – so keep it tuned in to EN!

The top ten at Badminton at the conclusion of the dressage.