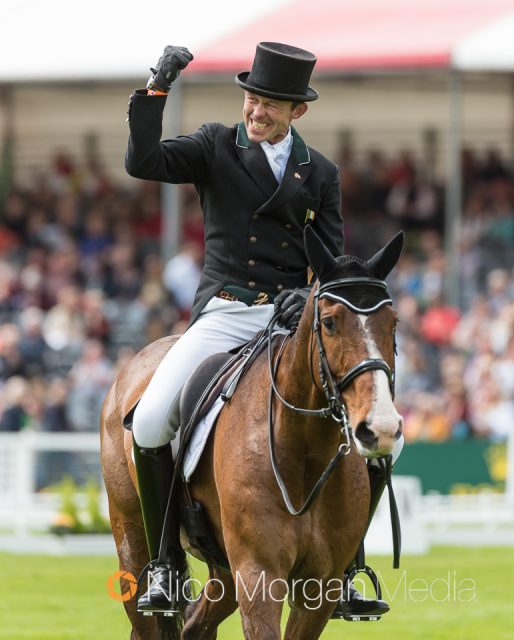 “I cried like mad last year – I’m glad I’m a bit more manly this year,” laughed Jonty Evans after his test with crowd favourite Cooley Rorkes Drift. He’d have been excused for shedding a few tears, though – his phenomenal score of 24.1 bested even his test of last year which, at 24.8, was a huge personal best. He currently sits in second place behind yesterday’s leaders Ros Canter and Allstar B.

“He was great in the test, as usual,” said Jonty, who comes into Badminton fresh off a win in the CIC3* Grantham Cup at Belton with his crowdfunded horse. “I’m really pleased with him. There’s a certain expectation coming here because of his test last year, but he’s done it again for me.”

The spectators were expressive in their appreciation of ‘Art’s’ brilliant performance, but it didn’t faze the 12-year-old Courage II gelding: “He loves the atmosphere – that’s something I can totally rely on with him. He’ll go in there and enjoy the experience of being in there. He gets one of the biggest cheers every time he’s out and it’s great – I really appreciate him and it’s lovely to know that the crowd does as well.” 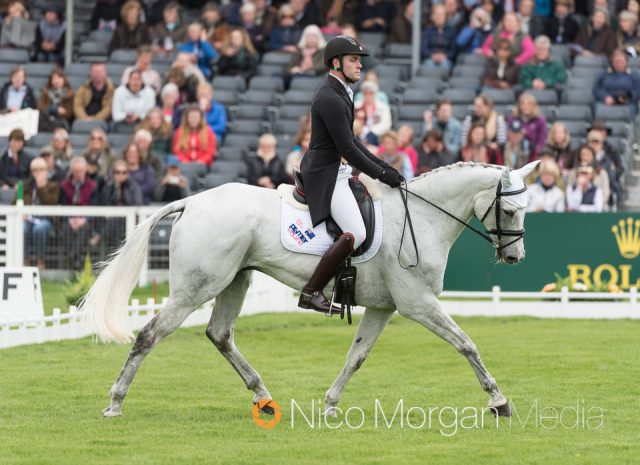 Australia’s Paul Tapner and Bonza King of Rouges didn’t quite manage a personal best, but came close with their score of 24.4, which was enough to propel them into third place. This is the horse’s second attempt at Badminton, after his week ended early with a fall out of the water last year. 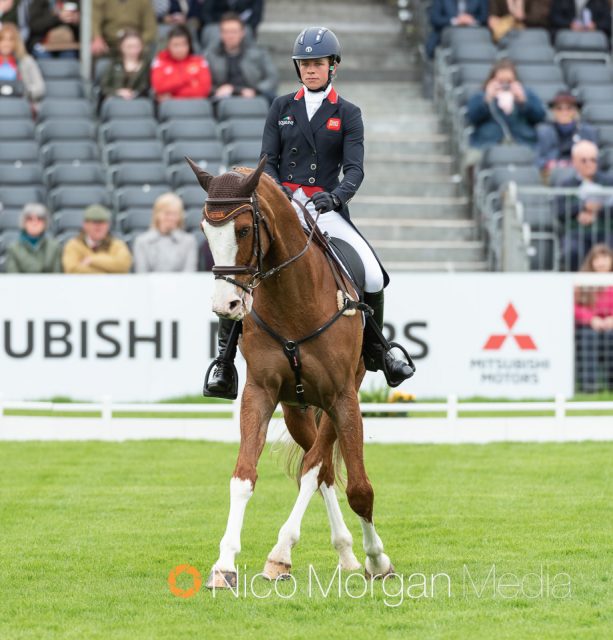 In their first four-star test together, the new partnership of Izzy Taylor and Alex Phillips‘ Perfect Stranger proved a solid one, earning 25.1 to sit in seventh place behind Lauren Kieffer and Veronica.

“It’s our first four-star together – our first big test, if you like – and I’m very pleased with him,” said Izzy. “He was very relaxed and wasn’t at all fazed by the excitement of being here. When they do a test like that, it’s hard to find something to be disappointed with.”

The horse was formerly piloted by Andrew Nicholson, but location proved a factor in the ride going to Izzy.

“Alex, who owns him, lives near me and I had started riding a few of her youngsters, but not him,” she explained. “He was off at the time, and when he came back, Alex was struggling with the logistics of getting him to Andrew in Marlborough and going back and forth, so she asked me to take on the ride. It’s been great – he asks after the horse and I’ve been able to call him and ask him questions, which he happily answers, so it’s all been really helpful and professional.” 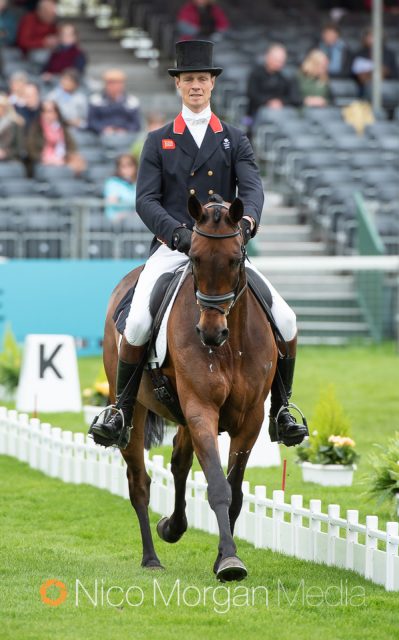 They didn’t quite sneak into the top ten, but William Fox-Pitt‘s test with Fernhill Pimms, which scored a 27.1 for thirteenth place, was an emotional one, as it saw William make a return to the event at which he has historically been a familiar face.

The horse hadn’t been seen in international competition since Burghley in 2015, and so, with no FEI points to his name, he was on the bottom of the waitlist for Badminton.

“Because of my position on the waitlist, I was thinking I was going to Kentucky, and Badminton wasn’t really on my radar at all. But then I couldn’t really get enough prep in for Kentucky. I only found out last week that my entry had been accepted – until then, I thought, at what point do I just pull the plug anyway?”

Now that they’re here, William is looking ahead to the real test: tomorrow’s cross country.

“It’ll be a jolly good wakeup call for us both – I suppose I’ll find out if I can still do it!” he laughed.

We’ll be back soon with all the action from this afternoon’s final session of dressage.

The top ten at the lunchbreak on the second day of dressage at Badminton.