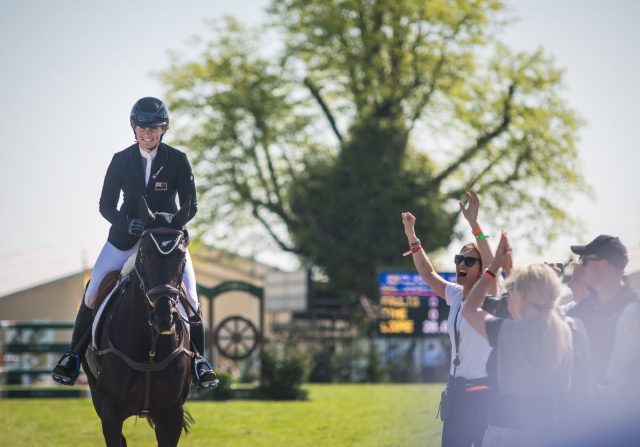 Badminton 2018: Jonelle Price and Classic Moet finish their winning showjumping round – a first international clear in four years – to a tumult of celebration. Photo by Tilly Berendt.

The Badminton field this year is a veritable chocolate box of equine talent, brimming with five-star winners, gold medallists, and record-breakers. And then you get to the dark horses – the up-and-comers, the horses who have gone through revelatory training experiences over the winter, and the tricky talents, who could just turn around and win the whole thing for a bit of a laugh. With 81 in it as we get the dressage ball rolling, there’s no harder question than the obvious one: who wins it? So, of course, that’s the question we decided to try to answer – and then some. Keep reading for the EN team’s picks for the big win, the best mare, the dark horse, the best of the Brits, and the top first-timer. Let us know your own picks in the comments!

Big Winner: Padraig McCarthy and Mr Chunky come to their second Badminton as the reserve World Champions, having claimed double silver for Ireland in Tryon last year. They made their Badminton debut last year and finished eighth, and although Padraig admits that Chunky only really has one gear across the country, it’s proven to be a damn good one. This horse has been my poster boy for a few years now, and I would love to see him and his ludicrously talented rider take top honours here.

Best Mare: Anyone who knows me knows that I’m a sucker for a game, feisty, quirky mare – the Classic Moets of the world just really tick my boxes. But my mare of the week isn’t actually Classic Moet and nor, sadly, could it be – instead, it’s my favourite under-the-radar superstar-to-be. I’ve written a fair bit about Tom Crisp’s Liberty and Glory before, and rightly so – she reminds me of all the daydreaming I did as a kid, when the best of my fun was had trudging to the local riding school and then heading home to read well-thumbed books about legends of the sport like Murphy Himself. To me, this sport isn’t about perfect stamps – instead, it’s about slightly imperfect horses with bucketloads of gumption, and riders who understand that gumption and love it. Liberty and Glory just is that horse for me – she might not be a first-phase leader, but you’ll never see a horse enjoy cross-country more (despite her formative years spent lying down in start boxes in protest). She climbed 45 places to finish 6th at Pau last year, and she could do much the same again – she’s the sort of horse the Glentrool trophy was made for, and the sort of opinion-on-legs that dreams are made of.

Dark Horse: This might seem like a bit of a cop-out where dark horse choices are concerned – after all, he’s been a close second in a five-star, so he’s certainly not unproven. But Reve du Rouet, ridden by Sarah Bullimore, isn’t an obvious champion – he’s tricky and temperamental, and can boil over in the first phase. On the other side of the coin, he can behave beautifully – and then he’s very nearly unbeatable. A Jekyll and Hyde horse for sure, but if the good version comes out to play, this could be their year.

Best of the Brits: It’s a toss-up for me between Oliver Townend and Laura Collett, both of whom are on absolute fire at the moment. Ballaghmor Class and Cillnabradden Evo were both astonishing when breaking records at Burnham Market on their final prep run, while Laura has produced her impressive string of horses to the point where she can just open them up and let them sparkle now. Mr Bass was a decisive second in his five-star debut last year, and we’ve waited a long time to be able to watch him make his mark on the level on home turf. After missing out on WEG last year, both these riders will be prepared to give everything they’ve got, and their fellow competitors should be very, very scared.

Top First-Timer: Emily Philp has got to be one of Britain’s most talented riders not yet to have achieved superstar status. With her longtime mount Camembert, she’s clocked up the most astonishing showjumping record – they’ve NEVER pulled a rail in an international. That’s 22 consecutive clear rounds, people. No other horse on the entry list can boast that kind of record, and it’s not just a fluke (nor is it partnered with a dodgy cross-country record). Emily balances educated riding with instinctive riding, which means that she’s able to produce her horses to be bold, classic jumpers who can figure problems out for themselves. Camembert’s brilliant record is a testament to his rider’s hard work – and it’s about time they were recognised on the main stage.

Big Winner: With his late draw, it’s possible Oliver Townend and Ballaghmor Class will get enough breathing room in dressage to have a rail down on Sunday and still win. After coming so close to taking the Rolex Grand Slam last year, Oliver will be a man on a mission to restart the quest, and this horse has plenty of five-star experience now. That puts them just ahead of Laura Collett and Badminton debutant Mr. Bass in my mind.

Best Mare: European bronze medalist Bulana makes her Badminton debut following a lackluster 2018 season that saw her retire at Luhümhlen due to runouts when she was essentially unrideable for Nicola Wilson. That’s the type of fight she’ll need to take on this Eric Winter track. Piggy French’s Badminton form has historically been up and down, but she sat in the top 10 after dressage with Vanir Kamira last year before an unlucky tip up on cross country. It’s a toss-up for me.

Dark Horse: Billy The Red with Tina Cook. I watched him meltdown in dressage twice last year at Luhmühlen and Aachen before going on to deliver a beautiful test at the World Equestrian Games. If he can get through the first phase with a competitive score, he will be one to watch as a spoiler alert to challenge the top of the leaderboard.

Best of the Brits: Take your pick between Oliver Townend and Ballaghmor Class, Laura Collett and Mr. Bass, and Tom McEwen and Toledo de Kerser — all of them are coming in with a strong shout. (Those are my podium picks in order.)

Top First-Timer: Emily Philp has one of the best show jumping records in the field with Camembert. Look for them to seal the deal on a fairytale weekend come Sunday.

Big Winner: Laura Collett and Mr Bass. This freaky FOD machine was second at his first five-star at Luhmühlen with a sub-30 finishing score, so he’s got the stuff to do it. Plus, I’m a huge fan-girl for Laura, so I’m pulling for the a top finish for this pair.

Best Mare: Izzy Taylor and Call Me Maggie May. I was smitten with this mare after watching her win the CCI3* at Tattersalls last summer, so the choice is easy for me!

Best of the Brits: Laura Collett and Mr Bass.

Top First-Timer: Jenny Caras and Fernhill Fortitude. With both of our U.S. representatives making their debut appearance at Badminton, I’d be remiss not to nab one of them as the best first-timer. Jingles for a strong finish for these two.

As per tradition I’m abstaining from picks and predictions, sending out instead a sincere wish on behalf of EN and eventing fans everywhere that every last horse and rider enjoys a safe, happy 2019 Badminton Horse Trials. Let’s do this thing. Go Eventing!