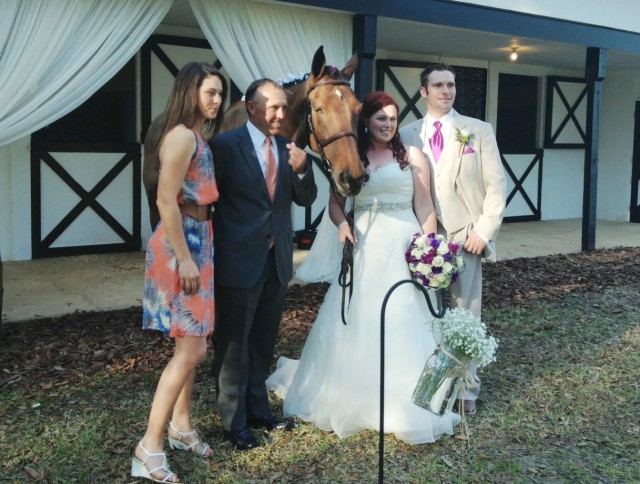 It’s not every day a famous four-star horse makes an appearance at a wedding, much less escorts the bride into the ceremony. Carl and Cassie Segal’s Ballynoe Castle RM, Buck Davidson’s beloved upper-level mount, helped his longtime groom Kathleen Blauth make her grand entrance as she married Daniel Murray this past weekend in Florida. Reggie looked the part with white flowers braided into his mane thanks to the handiwork of Aubyn Geser, and Buck said the moment could not have gone more perfectly.

“I was so nervous because Kathleen has meant everything to me, and I wanted that moment to be perfect for her,” Buck said. “The plan was for her to ride Reggie up to me, and I would lead him behind the altar into a stall behind where they were married. I had a grain bucket on a stool, and he kept eating from the bucket the whole time until the very end right when it came time to kiss the bride. Then he knocked the bucket off the stool and rolled. But up until then, he had his head out of the stall the whole time watching the ceremony.”

Buck said it was a beautiful wedding, and he was so happy Reggie could play a role in Kathleen’s big day. The 2013 PRO Liz Cochran Memorial Groom’s Award winner, Kathleen has been the backbone of Buck’s operation for many years, and no horse has meant more to her in all that time than Reggie. “The relationship she has with that horse is unbelievable,” Buck said. “What successful four-star horse could do that in a wedding? He loves her so much, and it shows.” EN wishes all the best to Kathleen and Daniel! 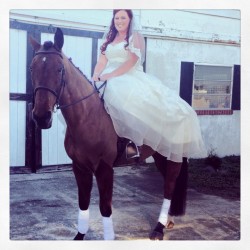 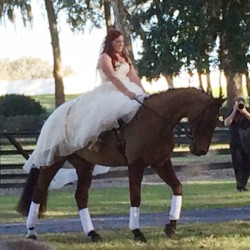 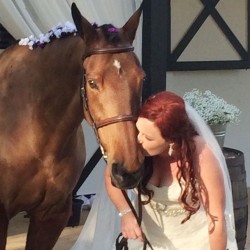