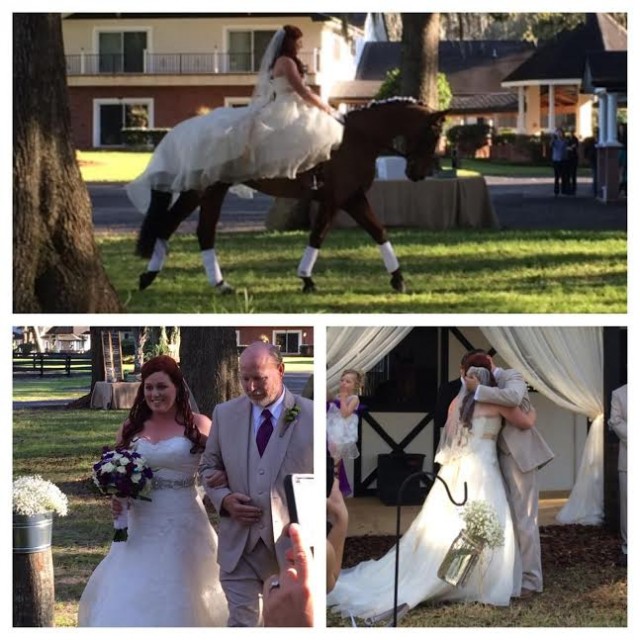 A 4* Wedding. Photos via Bronwyn

What a weekend!  Buck’s longtime groom Kathleen Blauth married Daniel Murray in Ocala over the weekend.  The pictures are gorgeous.  Best wishes to Kathleen and Daniel.  If that isn’t enough to put a smile on your face, today is the last “dark Monday” until the fall.  Being part of the barn’s late-night crew, I am unreasonably excited about this as it means less stumbling around in the dark and wondering if that fluffy shape with reflective eyes is the barn cat or a raccoon.  Honestly, it also means that I should probably up my game on my spring fitness plan sooner rather than later. I plowed through about a third of a package of Thanks-A-Lot Girl Scout Cookies this weekend.  I would have eaten the whole thing, but someone else in the house appears to have done so.  My husband swears it was the cat.

Register today for a chance to play Max Corcoran in the HORSES IN THE MORNING “Equiteemfg.com Celebrity Trivia Challenge” on Wednesday morning at 10 am Eastern.  You could win a Redmond Equine Gift Pack worth over $75.00.  One lucky player will play Max in three rounds of horsey trivia.  Register here:  http://www.horsesinthemorning.com/celebrity-trivia-challenge/

Sarah Braun’s mare Perfect Intentions underwent colic surgery this weekend. Two years ago the pair went to the North American Junior Young Rider Championships and were part of the gold medal winning team. Sarah did have insurance to help cover part of the cost of colic surgery, but even still she is facing some significant vet bills.  A GoFundMe page has been set up to help with the costs. [GoFundMe]

The NYC Carriage Horses continue to be in the spotlight and the question of whether or not they will remain in the city has yet to be answered. The New York Post’s editorial board raises the question that if the newly elected mayor believes that horses do not belong in New York City traffic, why isn’t he campaigning to remove mounted police from the city as well? [More from NYPost.com]

A Loveland, Colo. horse is safe today after a scary weekend.  Sunday morning the mare fell in to an icy pond and was rescued by the Loveland Fire Rescue Authority. [More from TheDenverChannel.com]

Urban development is a threat to all horse sports, not just eventing.  The chairman of the Devon Horse Show has resigned after board members spoke out about his undisclosed role in building a hotel and retail center near the fairgrounds where the show is hosted.  [More from Philly.com]

Horse abandonment is not just a problem in the United States.  Current estimates are that there are about 7000 horses at large in the UK. It is interesting to see the different solutions that different areas come up with. [More from DailyMail.co.uk]

An Australian man accused of slaughtering six miniature horses appeared in court with a security guard.  He was scheduled to appear on six counts of ill treating an animal to cause harm or death and three other charges. The court has remanded him on continuing bail so that he may face court in Adelaide in May. [More from DailyTelegraph.com.au]

Monday Video: My birthday is in June.  Thank you.