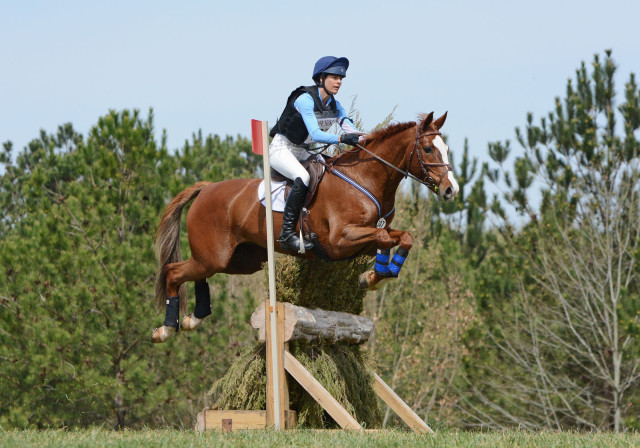 We’re devastated to report this morning that Sher Schwartz’s 11-year-old Luxembourg Warmblood mare, Beaulieu’s Cayenne, was euthanized last night after a pasture accident that left her with a shattered hind leg. Beaulieu’s Cayenne had been campaigned by Julie Richards through the CCI3* level, and the big goal for next year was to compete at Rolex.

“She must have twisted the leg just right cantering in the pasture,” Julie said. “She torqued it just enough that there was nothing we could do, it was just shattered. She was the soundest horse and it’s a terrible blow, we are all just in shock.”

Beaulieu’s Cayenne was the first horse to bring Julie back to the upper levels after representing the U.S. at the 2004 Olympics in Athens. After taking the ride three years ago, Julie and Cayenne sailed up the levels together, most recently finishing ninth in the CCI3* at Jersey Fresh earlier this year.

“She was so well started and such a good mare,” Julie said. “We had a plan for AECs, Fair Hill and then on to Kentucky next year and we’re just heartbroken. (Owner) Sher (Schwartz) did everything right by her and nurtured her. I really enjoyed riding her.”

Indeed, it can be said that Cayenne was well loved and a favorite of Sher’s, who also owns Wonderful Will. “She was just so special from the moment I saw her,” Sher said. “I bought her as a five-year-old from Michael and Nathalie Pollard, and she was so beautiful and well put together.”

“Although I could ride her on the flat, she was always a bit too spicy for me over fences,” Sher continued fondly. “Whenever I’d come to Julie’s for lessons, she’d always run up to the gate — she knew the sound and sight of my truck and trailer and no one else’s. She always had a sweet little nicker for me.”

Cayenne will always be remembered as a trier and a hard worker, a horse who loved cross country and answered every question put in front of her. She incurred no cross country jump penalties in her FEI career and continued to step up to the plate when asked. “We showed her lightly because she really didn’t need it,” Sher said. “She always did everything we asked her to do. She just needed to go on and do what she needed to do.”

In the face of tragedy such as this, we are yet again forced to remember how fragile our horses are. Cayenne was privileged to have a dedicated team behind her in her too-short life, and we will fondly remember her gleeful expression across country and the smiles she brought to the faces of those who loved her.

The entire EN team sends its condolences to Julie, Sher and the people who loved this special red mare. Rest in peace, Beaulieu’s Cayenne.