Eventing takes a village, and some of the individuals critical to the success of the sport may not necessarily get the recognition they deserve. In this new series, we will highlight unsung heroes and their commitment to the sport. If you would like to nominate someone for the series, email [email protected]. 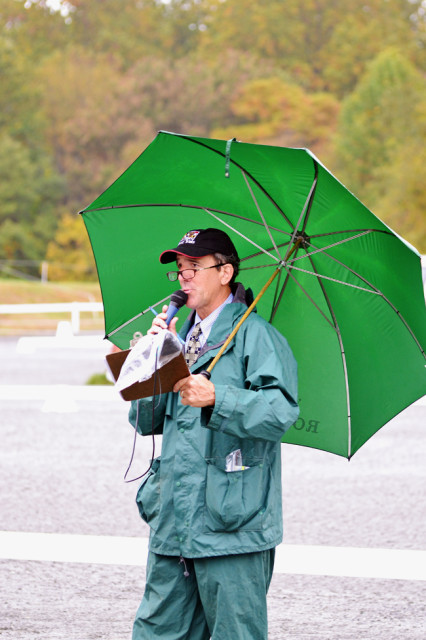 Brian O’Connor was born to be an entertainer, and although he studied to be a theatre actor and has performed in professional singing groups, most of us know him as the voice ringing out over the loudspeaker at horse trials around the country. Here at EN, we love his humorous blogs and videos created during his travels.

Brian spent his adolescence competing in eventing, but his career as a full-time event announcer was unplanned. After high school, he took a gap year in England, working at a theatre in London and falling in love with the arts. When he came home he enrolled in Catholic University and received his undergraduate degree in acting.

Horses had been absent from Brian’s life while he attended school and started his acting career. It wasn’t until he was offered a gig announcing at a local Pony Club show that his future was written in the arena sand.

“Falling back into the horse world was fun for me. I settled back in and there were people who I rode with and against (as a kid) who were then becoming the next superstars,” Brian said. “My knowledge of the sport and my voice training and personality was a great meld. It wasn’t a career choice to go into announcing. I accidentally fell into it,” Brian said.

Captain of the Ship

After the Pony Club show Brian, who was living and performing in Washington DC, started announcing to supplement his income from acting. He worked with Nigel Casserly for a few years before going full time and starting his own company, SpeakEasy Ltd., in 1987.

He still gets his theatre fix during the Christmas holidays when there are no events running. Instead of acting, he has turned to directing, which he said is one of the most rewarding things he’s ever done in theatre. As it turns out, theatre and show announcing complement each other well.

“Personality-wise it’s perfect for me. I’m very much an a-type of personality. What I do in the horse world is very much like a director in addition to announcing. A lot of people call upon me to help them run these shows.”

At events, Brian is not just ‘the voice’; he almost always sets up the sound system around the venue and doubles as controller on cross country day in addition to announcing. He’s the whole package, and he prefers it that way.

“People look for a captain when you’re driving a big ship like an event. That’s one of the personas I take over. It doesn’t happen at every event, but it happens at most events. That’s why I do what I do,” he said. 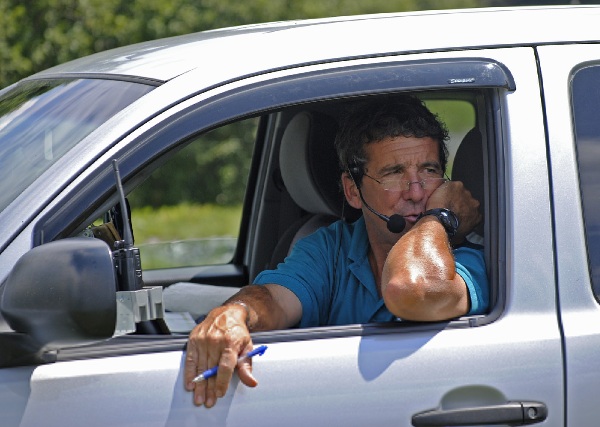 Brian O’Connor keeping an eye on the action. Photo by Eric Swinebroad.

The Evolution of Event Announcing

Nowadays we can keep up with the action and hear important announcements whether we are on course or in the barns. That is because there are usually speakers set up in every corner of the property and a knowledgeable announcer tethered to his walkie talkie and a microphone. But we weren’t always so spoiled with fancy set-ups. In the early days of horse trials, communications were a bit more complicated.

“When I was a Pony Clubber, they used to call the local Army Guard and they would come out and lay all those phone cables for the old field radios,” Brian said. “They enjoyed doing it because it became a field exercise for them. They didn’t know anything about the horses.”

Their instructions were to call in “rider X clear fence X” and if something happened, call it in and wait for a callback. These field operations were good practice using the same equipment used during service to the community in the event of national disasters. “They became part of the incantation of how we do radios.”

As technology improved, CB radios were used and amateur (ham) radio operators were also called in to help run communications at events. Today, Brian says he’s hired as much for his voice as his toys. He provides the speakers and radios and has his truck rigged so that the microphone is activated when he presses on the foot pedal.

When Brian started in the business of announcing, he knew about sound technology from theatre, but there was a learning curve when it came to PA systems. Today, one of Brian’s biggest jobs of the year is setting up the PA system and headset commentary at Rolex Kentucky.

Brian runs control and has been providing the PA system and sound for the past three years and knows that demands will increase as the course changes and new areas are used. It is a huge challenge but one Brian says he and his great crew are willing to tackle.

“Being at our Superbowl of U.S. eventing is an honor and a thrill.  My family has over 100 years of participation at Rolex – myself, David, Karen, Suzanne, Ian, and of course Sally.” 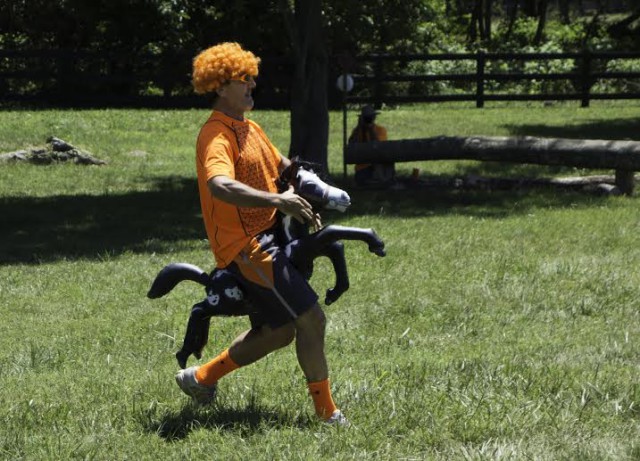 Brian and his horse Sydney at Sharon White’s JUMP! in 2014. Photo by Phyllis Dawson.

As an announcer, Brian considers his job to be equal parts entertainment and information. “You want to make it interesting for new people coming out – we’re always looking for new sponsors and spectators. You’re also making it informative not only for those people but also the riders, parents and grooms back at the start box or the barns. They rely on knowing what’s going on.”

So consider Brian a cheerleader for the sport and the people who participate in it, in addition to many other hats he wears. For years, Brian has watched horses and riders progress through the ranks, and his knowledge of those individuals and their successes and hardships gives him unique perspective as an announcer.

He finds other ways to add flair to his work as well. One year he rode in a Novice derby as part of Sharon White’s JUMP fundraiser. This year at Rolex, he rode a Pony Club pony around the show jumping track with designer Richard Jeffery, explaining the different challenges the competitors would face and discussing the intriguing history of each fence.

Brian would like more saddle time, but considering he works 35 horse trials or dressage shows a year, it is difficult to find the time. Lucky for us, he won’t be unplugging his microphone any time soon (unless he wins the lottery) and will stay “on tour” for the foreseeable future.

He may have accidentally fallen into his career as an announcer, but he’s embraced it and carved out an important role in the sport. After all, we know his voice when we hear it.

For more insanity in the middle from Brian, check out his YouTube channel for more gems like this one, and stay tuned for another interview where the O’Connors and I talk about their horseback ride across America!