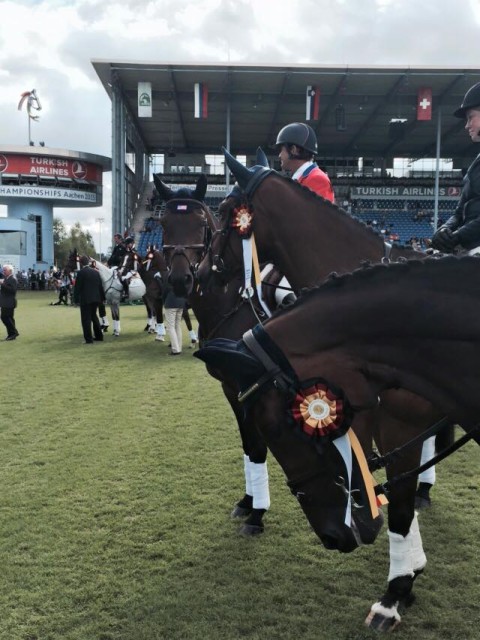 When I was a kid, in my pre-Eventing days, I spent more than a few dreary winter days daydreaming about competing at Spruce Meadows or Thunderbird in Canada. Sure, I could have gone to Indio (now Thermal) for the winter circuit, but there was something that was way more exciting about Spruce Meadows or Thunderbird. If I went, I could lay claim to competing internationally, even if I was just competing at 3′! I remember seeing a championship ribbon from Canada and being surprised that it was red white and blue, rather than what I recognized as the ‘traditional’ championship colors of blue, red and yellow. This realization that different countries used different colors for their ribbons was the most exciting bit of trivia EVER. This quickly blossomed in to a new obsession, learning about the ribbon colors that were used in other countries. I must say that those ribbons from Aachen are pretty fierce!  As I got older, the ribbon color fascination gave way to show-ring fashions that are popular in other countries. I spend far more money on horsey-things from Australia and the UK than I care to admit.

Totilas out of FEI European Dressage Championships, sent for MRI