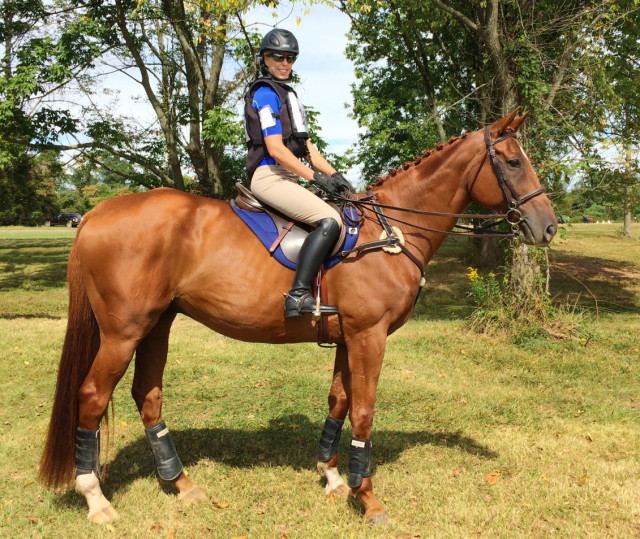 Can you imagine being legally blind and riding cross country? That’s a reality for Ashley Russell, who lost her central vision at age 20 due to a rare genetic disorder called Stargardt disease. But she hasn’t let it stop her from eventing, and she’ll be competing in Beginner Novice at this year’s Nutrena American Eventing Championships with a horse that has a comeback story of his own.

“I grew up riding in the hunters, and then I found eventing in Pony Club in my teenage years,” Ashley said. “When I lost my vision, I had to stop riding and learn to live again.” After getting married and having two kids, Ashley, now 38, decided to try riding again despite her legal blindness, ultimately teaming up with Golly Tabatabaie to form the BABS Eventing Team.

That’s when she found Philharmonic, then an 8-year-old chestnut Dutch Warmblood gelding that had suffered severe injuries in a lunging accident with a previous owner. “They had him on a lunge line with side reins, and he flipped over backwards, breaking his pelvis, whither and tail,” Ashley said. “He should not have survived the accident.”

But “Nic” beat the odds, though he faced physical and emotional challenges when he came back into work. “I got him when he was healed physically and could be ridden again,” Ashley said. “I spent the first year re-teaching him how to use his body. He couldn’t even walk down a small hill. He didn’t understand that he could rock back on his pelvis without feeling pain anymore. It was a very slow progression.”

Nic ultimately got to the point where Ashley felt he was ready to compete, and she took him out at the Beginner Novice level last year. “His confidence suffered a lot in the accident too, so we had some nasty stops for awhile,” Ashley said. “But now he’s come into his own, and his ears are pricked the whole way around cross country; he loves it.”

Ashley moved Nic, now 11 years old, up to Novice this year, and though their season started out a little rocky in the spring, he hit his stride in July and has thrived at the level ever since, culminating in a win at Seneca Valley Pony Club Horse Trials on their dressage score of 31 earlier this month. 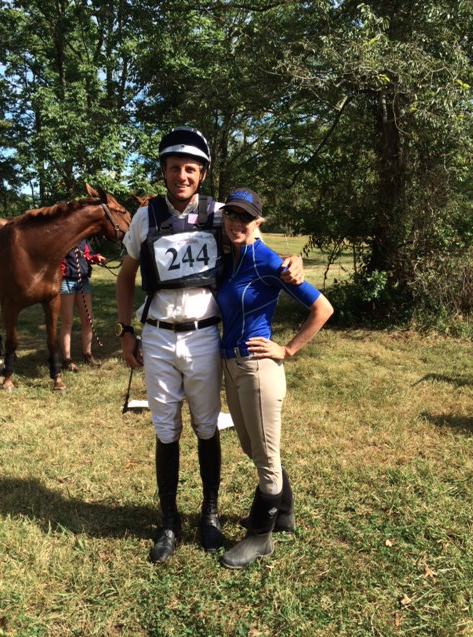 “I’m just so proud of him and our journey together,” Ashley said. “He’s one of those special horses. It takes a certain kind of trust in each other to get around a course. I have to rely on him, and he has to rely on me. That’s what it’s about — a partnership.”

Indeed, it takes a lot of trust for Ashley and Nic to go cross country together, with his lingering confidence issues from the accident and her legal blindness. Ashley spends a lot of time at each event walking her jumping courses with her trainer, Susu Dale, to map out a game plan.

“At first it was challenging to figure out the extra steps I needed to take in order to be able to event again,” Ashley said. “But I realized that I don’t need to see, the horse needs to see. I ride primarily by feel.”

Ashley and Susu will walk her courses multiple times, first with Susu walking in front of Ashley. When they come to a fence, they look around for landmarks — like a break in the tree line or a big table or corner nearby — that Ashley can see with her peripheral vision.

Then Susu will walk the course behind Ashley, making sure all her approaches are lined up correctly as she approaches each jump. They walk the course as many times as necessary until each approach is correct and Ashley can identify all her landmarks.

“It’s our job as riders to get our horses to the fence balanced, in a rhythm and straight, and then it’s their job to get over it,” Ashley said. “I don’t micromanage him, and he knows his job.”

After qualifying for the AECs at Beginner Novice last year, Ashley said she really wanted to make the haul from her base at TRU Liberty Stables in Lovettsville, Va., out to Tyler, Texas. Her team of her trainer, Susu, and one of her boarders, Jen Valentine, all made the drive together and are there helping her this weekend.

“I’m so proud of how far he has come, between me being visually impaired and him recovering physically and emotionally from his injuries,” Ashley said. “When we qualified, I thought, ‘Why not? We can get out there with the best of them and be competitive.’ It’s all about having fun. If not, it’s not worth doing.”

We love Ashley’s attitude and wish her all the best as she tackles the AECs with Nic. If you see her on course — she wears royal blue on cross country, and Nic is a big chestnut — be sure to cheer her on.