The Belton entry list is a sight to behold – every year, in every iteration, and in every class, it’s chock full of top-class horses and riders, preparing for a busy spring of taking over the world. This year is no different and, in fact, there’s a case for calling it the best Belton yet: unhindered by a bad spring, as they were last year, the finest specimens of the eventing world are out in force. Our focus this weekend is the feature class, the CCI4*-S Grantham Cup. A hefty chunk of the Badminton entry list has come forth to battle it out – most of the rest can be found in the event’s OI sections – and there’s a pretty incredible selection of the country’s finest young horses on display, too.

The first half of the field took to the dressage arena today, and it was the young horses who were to steal the show in a closely-fought contest. Leading the way going into day two is Izzy Taylor‘s 2017 six-year-old world champion Monkeying Around, who put a 26.2 on the board first thing this morning. Now eight, he comes forward for just his ninth international competition, and his first four-star. In his eight starts so far, he’s finished in the top ten five times and has begun to establish himself as a force to be reckoned with in the first phase. It should come as no surprise, really – the Hanoverian’s breeding is pure dressage, with Brietling W on his sire’s side and Donnerhall on his dam’s. He can jump, too, although we saw him finish the season with a 20 at the seven-year-old World Championships – so Izzy may not choose to run him to time here, despite his competitive position. 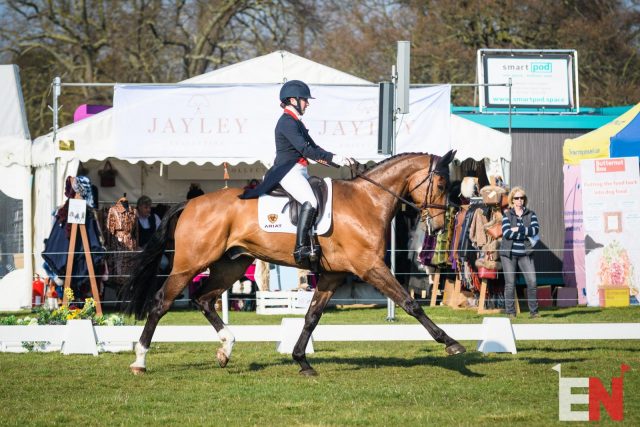 Laura Collett’s London 52 hits the mark in his first international test of 2019. Photo by Tilly Berendt.

Laura Collett‘s 2018 Blenheim eight- and nine-year-old CCI4*-S winner London 52 started his season much as he finished it — the consistently flash first-phase performer laid down one of the tests of the day to post a 28.8 in the Grantham Cup CCI4*-S, putting him in provisional second place. Owned by Karen Bartlett, Keith Scott, and the rider, ‘Dan’ was certainly one of last season’s most exciting prodigal talents, particularly when you consider that he only started eventing in the latter half of 2016. Prior to that, he was a showjumper – and though Laura initially bought him as a sales prospect, his ineffable talent and almost freakish adaptability to his new role quickly won him a permanent stable in her yard.

Last season, we saw enormous potential backed up by correct training — this season, we’re seeing that potential come good. Graced with elegant paces, Dan is now exhibiting a greater level of confidence in his way of going, and a more refined and secure acceptance of the contact, and it was this that allowed him to rocket up the leaderboard despite finding himself up against much more experienced horses. 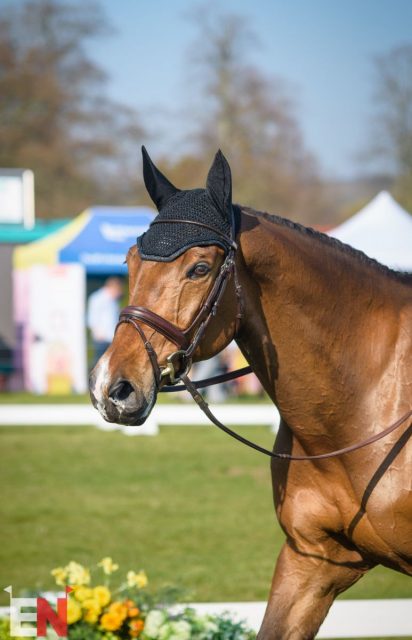 London 52 spent a winter working on perfecting his dressage – and his blue steel. Photo by Tilly Berendt.

“I’m so pleased with him. He’s still really green at this level, and to go into an atmosphere like that so early in the season is a lot,” says Laura. “He went in at the beginning and sort of froze a bit, but as soon as we started he came back to me. One of the things we’ve been working on is getting a bit braver in the canter work, and I thought in the second canter, that really paid off. We missed the change in the first canter, but in his way of going and everything he does, he’s just a lot more mature now.” 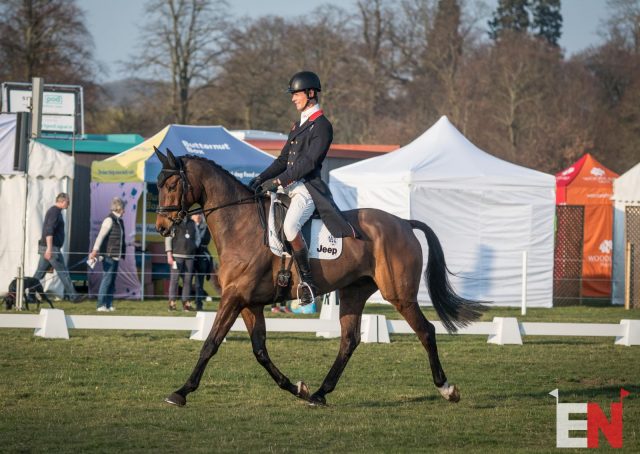 Little Fire is, well, a little fiery – but an otherwise correct and pleasing test puts him into third place overnight with William Fox-Pitt in the irons. Photo by Tilly Berendt.

William Fox-Pitt led the charge for the five-star squad among the field, closing out today’s competition with a 30.1 for provisional third place with Little Fire. Some interpretive dance moves in the changes proved expensive, but Little Fire is yet another horse who begins this season looking a jot more mature and confident overall. The pair finished their season at Pau last year, which looked set to be an impressive debut at five-star for Jennifer Dowling’s ten-year-old, but a surprise rider fall at the tail end of the course ended their weekend early. Now, they’re looking ahead to the horse’s first Badminton. 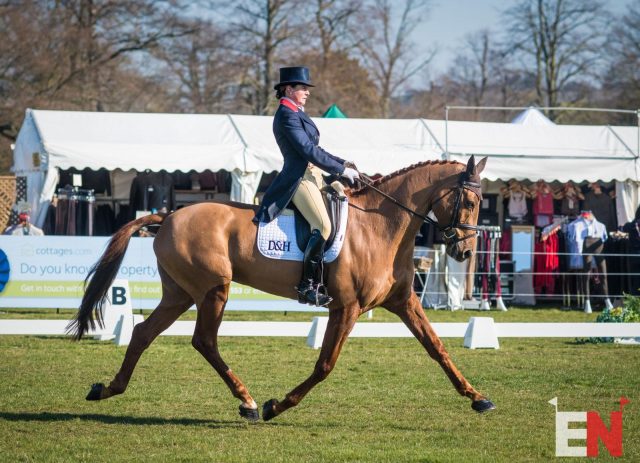 From Tryon to Belton: Quarrycrest Echo points his toes for a competitive first day in the CCI4*-S. Photo by Tilly Berendt.

She was part of the gold medal-winning team at Tryon last year, and with entries at both Kentucky and Badminton, Piggy French is looking to finally add a five-star victory to her resume. That determination certainly showed through today, and she finishes the day in provisional fourth aboard WEG mount Quarrycrest Echo (30.4), and tenth with stalwart partner Vanir Kamira (33.1).

Quarrycrest Echo, or Red, lost some marks when he broke in the first medium trot, but the rest of his performance was polished and professional – Piggy, for her part, thought it rivalled some of his best work. The twelve-year-old gelding, owned by Jayne McGivern, will head to Kentucky next month, while Trevor Dickens’ Vanir Kamira, known as Tilly, will make her return to Badminton. 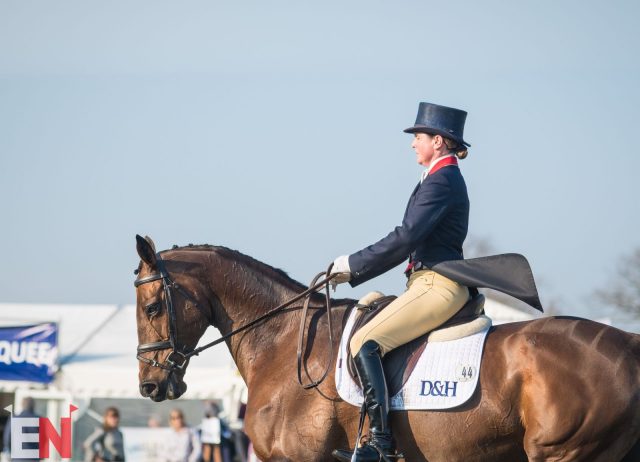 Just outside the top ten, one of the most exciting performances of the day was delivered by JL Dublin, the talented up-and-comer in Nicola Wilson‘s string. Just eight-years-old, he comes to his first four-star after finishing fifth in last year’s seven-year-old World Championship. His 33.2 today was enough to put him in eleventh, so while he won’t be in the upper echelons after this phase, he’s reaffirmed his place on our radar as a serious horse for the future. 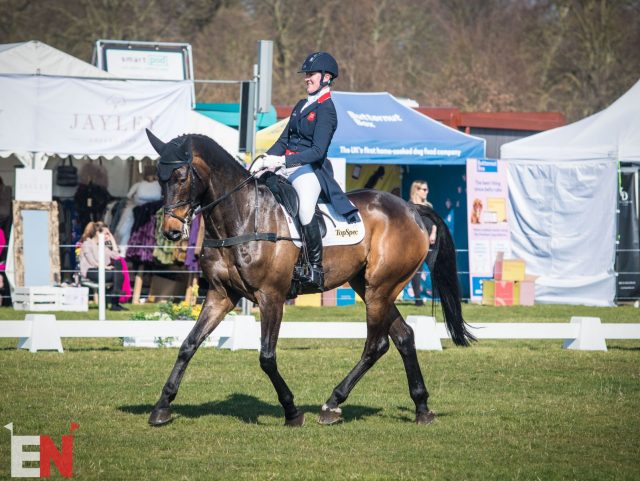 Nicola Wilson’s level debutante JL Dublin offered a taster of what’s to come – and it was very tasty indeed. Photo by Tilly Berendt.

“I’m just so proud of him,” says a delighted Nicola of James Lambert and Deirdre Johnston’s Diarado gelding. “He was with me the whole way through, and we know that the dressage arena for the Grantham Cup is really electric – they’re all on their own here, and there’s a lot going on. For such a young and inexperienced horse he stayed so focused, and he really did the best test he could have done at this stage in his career. I’m just so pleased with him, so proud of him, and so excited for what’s to come.”

It’s a jolly good start in a hot field, but tomorrow we’ll really see the leaderboard sizzle. Ireland’s Padraig McCarthy and his WEG silver medallist Mr Chunky, Kitty King and Ceylor L A N, Pippa Funnell and MGH Grafton Street, Tom McEwen and Toledo de Kerser, and Laura Collett‘s stable star Mr Bass head up an enormous batch of top-level heavy hitters taking to the main stage, promising a siege of the top spots. We’re also very excited to see sole US representative Jenny Caras, who partners Fernhill Fortitude in the first of their Badminton prep runs on these shores. The fun won’t stop there, either – Belton’s organisers have snuck a few bonus tests into Sunday morning’s schedule. The last of those? A certain Ballaghmor Class who, with rider Oliver Townend, served up a piping hot 20.8 dressage at Badminton last year. There’s nothing we like better than an eleventh-hour gauntlet throw. 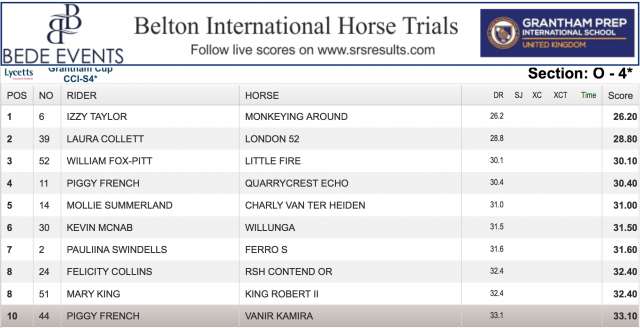 The top ten at the end of the first day of dressage in Belton’s CCI4*-S.