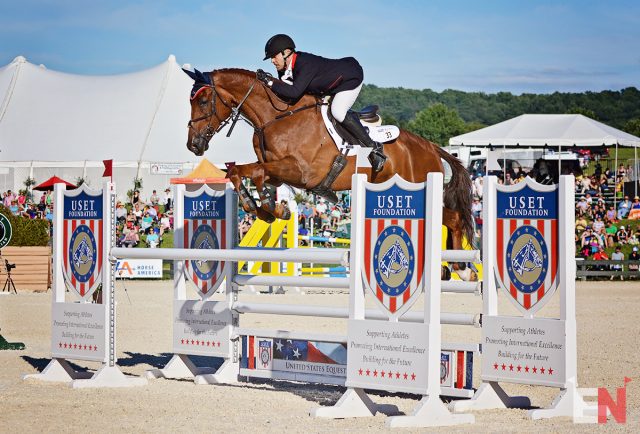 Kim Severson and Cooley Cross Border jumped clear over Marc Donovan’s course to defend their lead in the Brook Ledge Great Meadow International but withdrew following the conclusion of show jumping, as they are heading to Germany to represent the U.S. at Aachen.

That makes Britain’s Ben Hobday and Jane Chambers’s Shadow Man the overnight leaders in the FEI Nations Cup on their dressage score of 29.7. Ben has had “Fidjy,” an 8-year-old Belgian Warmblood (Fidjy of Colors X Favorite Van de Keezerswinning, by Winningmood van de Arenberg), since he was 2 and carefully produced the horse to this point in his career.

“We’ve just gone at our own pace. Luckily for us that pace has been he goes out does the job and usually brings back the rosettes,” Ben said, adding that “if he was a human he’d be one of those good looking, arrogant models who don’t listen to no one. But as long as he does the job I’ll let him do whatever he wants to do.”

Fidjy is a strong show jumper — he has jumped clear in six of his last seven rounds at international level — but with temperatures heating up throughout the afternoon here in The Plains, Virginia, Ben said he wasn’t sure how the horse would handle the conditions.

“I was a little bit concerned about the heat with him,” Ben said. “He was quite calm and relaxed in the warm-up, so we didn’t do too much. The bigger the atmosphere the bigger he jumps, and I just have to point him in the right direction and he does the rest. I’m fortunate to have such a lovely horse.” 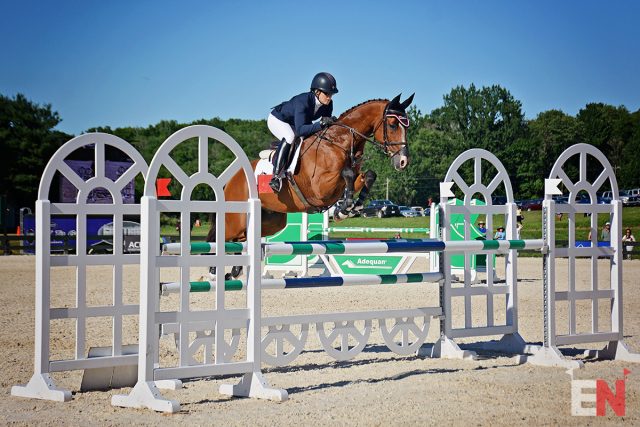 Allison Springer and Lord Willing, a 9-year-old Holsteiner (Lord Z X Legende IX, by Coriano) owned by the Lord Willing Syndicate, jumped clear to sit in second as the highest placed American combination on their dressage score of 29.8.

Jessica Phoenix and Pavarotti, a 16-year-old Westphalian (Pavarotti Van de Helle X Fidelia, by Foxiland), left all the poles in the cups but added an expensive 2 time penalties to remain in third place on 31.5. 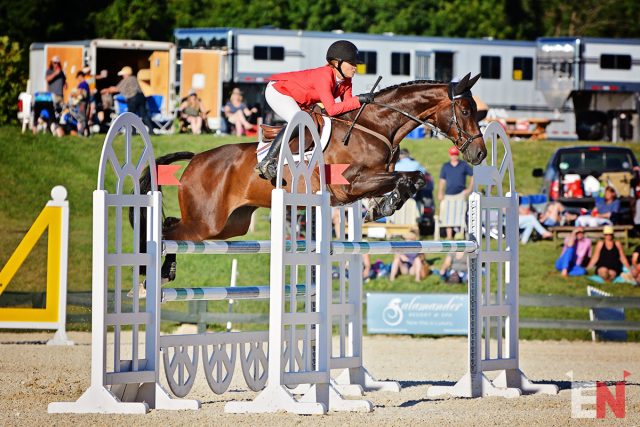 The top three after show jumping all sat within the top five following dressage, but the rest of this morning’s leaderboard shuffled drastically this afternoon. Twenty of the 46 pairs jumped clear rounds inside the time to give us a 43% clear show jumping rate.

Will Coleman and Soupcon de Brunet, a 12-year-old Anglo Arabian (Zandor Z X Bikadine, by Nouredine du Lirac) owned by the Conair Syndicate, moved from 11th all the way up to fourth place on 33.4 thanks to jumping a clear round. 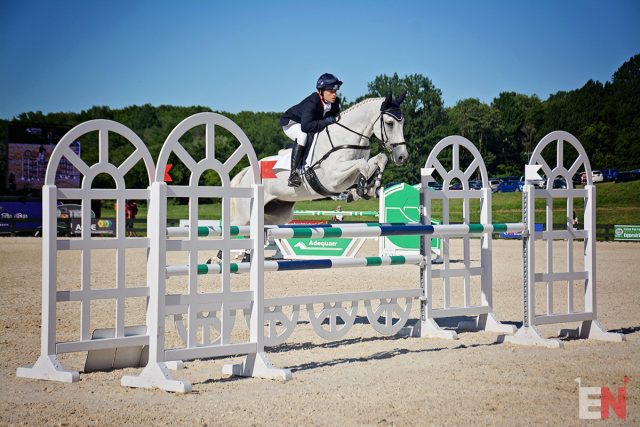 Team GB has two riders in the top five after show jumping, as Sophie Brown and her own Wil, a 15-year-old KWPN (Silverstone X Sjoukje, by Corland), also jumped clear to move from 13th up to fifth place on 33.4.

Allie Knowles and Sound Prospect, a 16-year-old Thoroughbred (Eastern Echo X Miner’s Girl, by Miner’s Mark) owned by the Sound Prospect Syndicate, jumped clear to move up from 18th to sixth on 34.8. 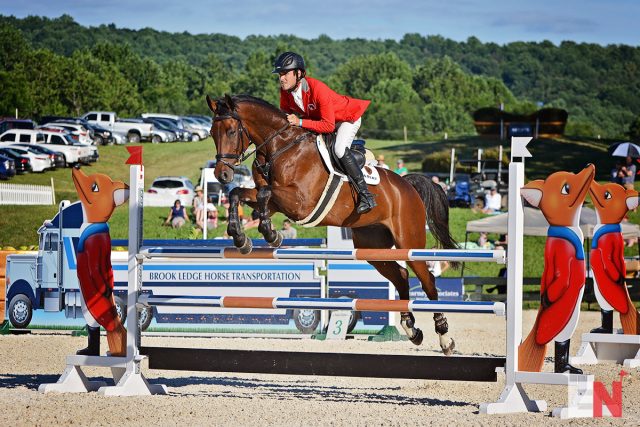 Felix Vogg and Colero, a 10-year-old Westphalian (Captain Fire X Bonita, by Bormio xx) owned by Jürgen Vogg, sat second after dressage and had one rail down and 2 time penalties to drop to seventh place on 34.8. 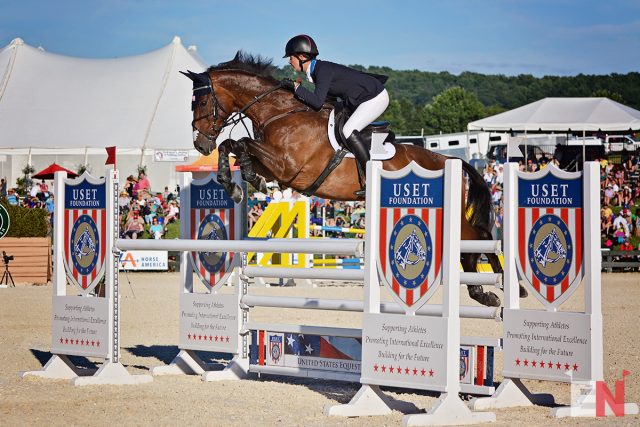 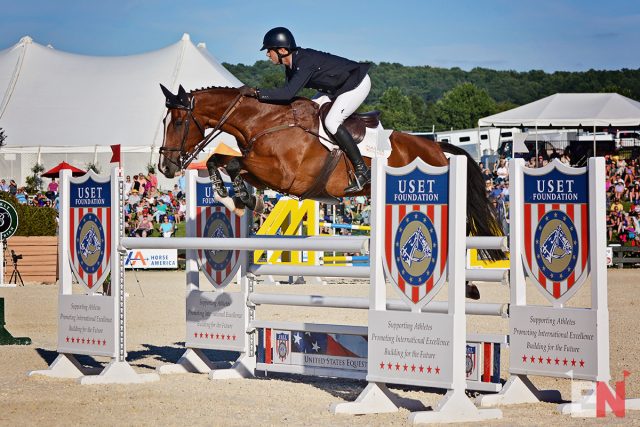 Will Coleman and Off The Record. Photo by Jenni Autry.

Will Coleman has two rides in the top 10 after having one rail down with Off the Record. The 9-year-old Irish Sport Horse (VDL Arkansas X Drumagoland Bay, by Ard Ohio) owned by the Off the Record Syndicate moved from sixth after dressage to tie for ninth place on 35.1.

Click here to view full scores after show jumping. Three of the four British team riders delivered clear rounds to hold the lead in the Nations Cup on 99.3 points, with the U.S. in second on 123 points and Canada in third on 126.9 points.

Cross country starts at 9:30 a.m. EST tomorrow morning and will stream live on USEF Network. Click here for ride times. Click here to catch up on all of EN’s #GMI2018 coverage. Go Eventing.