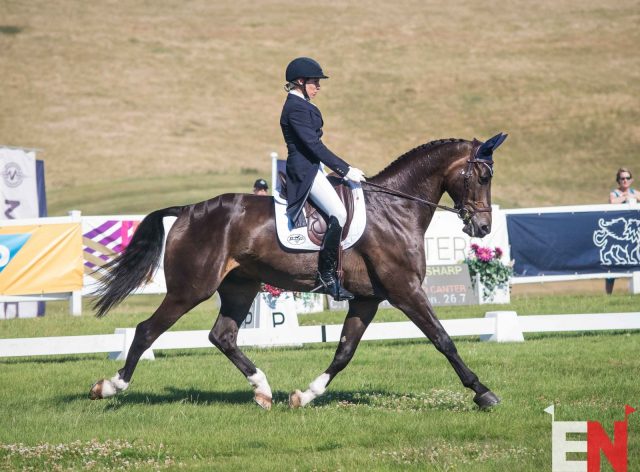 Fresh off the back of last month’s Arville ERM leg, at which Liz Halliday-Sharp withdrew the 15-year-old Fernhill By Night, the pair produced a top-class test at Barbury to joint-lead the Event Rider Masters class after the dressage.

“We went from what was probably our worst score to one of our best,” said Liz after her final score of 24.9 was confirmed. “I’m so thrilled – ‘Blackie’ can be a very lazy horse, and since our test at Arville, which wasn’t great, I’ve worked very hard to get him in his happy place. He really enjoyed himself in there and deserved the score. This is where we’d like him to be all the time.” 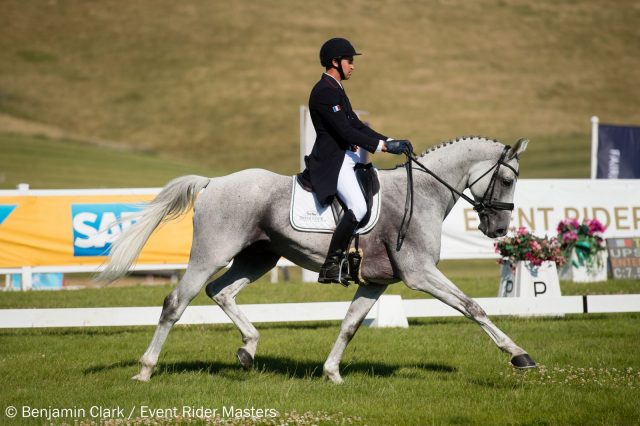 The pair were followed into the ring by France’s Tom Carlile and his stallion Upsilon, with whom he won this leg last year and set the ERM dressage record of 20.5. Hot favourites for the top spot, they produced a typically expressive test, but some minor errors precluded them from matching last year’s score. Instead, they landed on a final score of 24.9 – tied with Liz, and creating a match-race for tomorrow’s jumping phases.

“I suppose, if I have to tie with anyone, Upsilon will do,” laughed Liz. 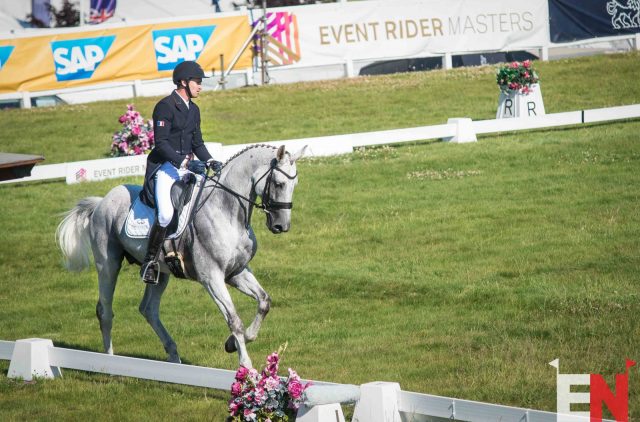 Tom Carlile and Upsilon hold the joint lead in the ERM. Photo by Tilly Berendt.

The Anglo-Arab, like Fernhill By Night, comes to Barbury after a disappointing Arville, and Carlile was pleased to finish the first day in a competitive position, despite the dropped marks.

“He got a little too relaxed in the ring and had a little mistake,” he explained. “He warmed up quickly and was really swinging through his back, and then I went in and he felt a bit casual but I didn’t want to kick him along like a pony.”

Upsilon’s work improved throughout the test, and Carlile even enjoyed a loud cheer from the crowd during the horse’s extended canter – although even the Frenchman was forced to admit that the cheer was actually for England’s football team, merrily trouncing Sweden metres away on the big screen.

The final rider into the ring was one of the class’s hot favourites. Oliver Townend and Cillnabradden Evo are something of ERM specialists, winning two legs and finishing runner up once together since the series’ inception. They, too, had come home from Arville empty-handed after retiring on course, and breaking a six-strong streak of first- and second-place finishes in international competitions.

“He’s allowed a blip occasionally. We know each other well, and he’s normally reliable and consistent, so he’ll be back to that,” said Oli. Today, they delivered a 25.3, missing out on the top spot by less than half a point.

“I was very pleased with him. He did pretty much his best job; he’s obviously not as flash as Upsilon, so coming in right after him, we just did the best we could.” 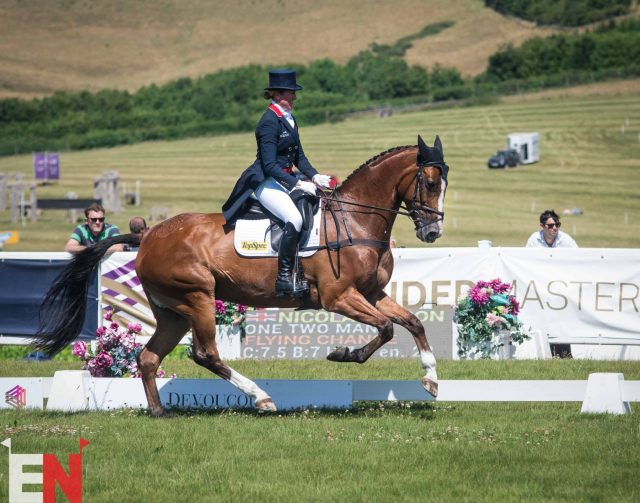 Nicola Wilson and One Two Many’s boldness is rewarded with a great score. Photo by Tilly Berendt.

Already a leader in the non-Masters CIC3* aboard Bulana, Nicola Wilson held the ERM lead for the early part of the afternoon with One Two Many, on a score of 26.4.

“I’m thrilled with him – he was such a good boy,” she enthused. “He has so much ability in the dressage arena, but sometimes he can just say, ‘ooh, look what I can do!’ Now we just have to look ahead to the jumping – there’s always a lot to do at Barbury.” 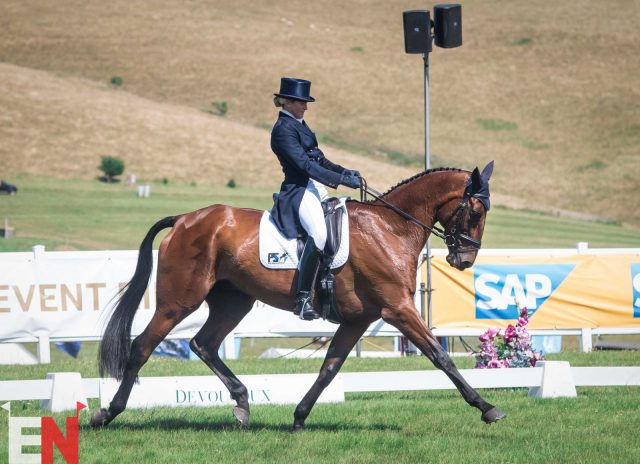 Sarah Cohen and Treason delivered one of their best-ever scores at the level to round out the top five overnight. Sarah, who downsized her operation from eventing professionally to campaigning just her top horse ‘Mr T’, focuses on ERM classes and won 2017’s Wiesbaden leg. This helped to earn her a place on the end-of-series podium.

“When I went down the centreline, I felt I really had him with me,” she said of her test today. “When he’s with me, he’s very good at dressage. We changed our warm-up routine today, too – because it was so hot, I didn’t do more than 15 minutes, but it seemed to work for us.”

It wasn’t to be a day of top marks for everyone – mistakes and moments of tension could be found amongst many of the tests, with only nine combinations scoring sub-30. There was also a surprising early end to the competition for one pair – Izzy Taylor and Director General were eliminated for prolonged disobedience after the horse began to spin and rear at length in the arena.

Tomorrow, both the ERM and the non-Masters CIC3* move into the jumping phases, with each class taking to Barbury’s famous banked main arena in the morning, before heading out to the amphitheatre. We’ll be bringing you all the action as it happens – stay tuned! 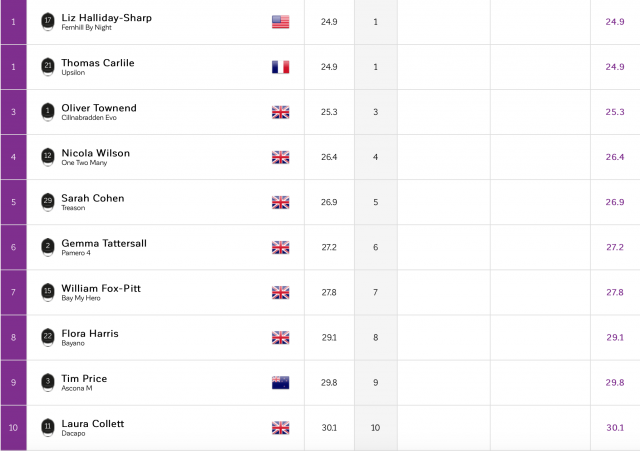 The top ten in Barbury’s ERM CIC3* after dressage. 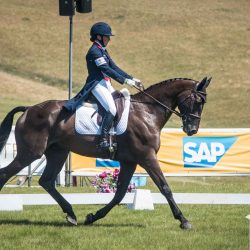 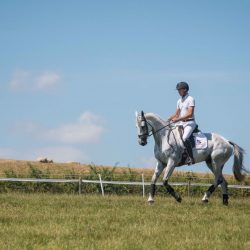 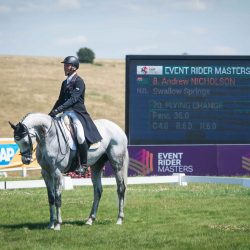 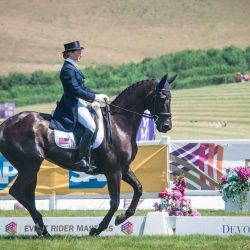 Tiana Coudray and Under the Clocks. Photo by Tilly Berendt. 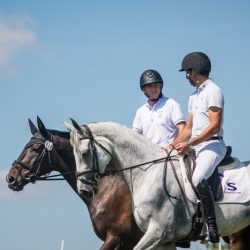 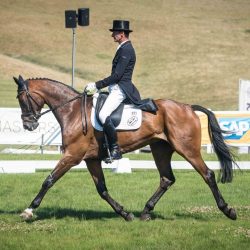 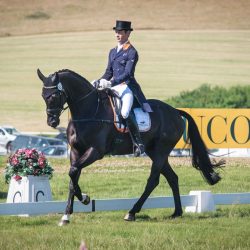 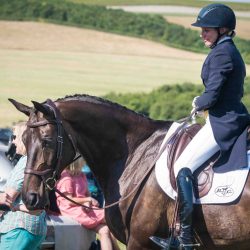 Liz-Halliday Sharp and Fernhill By Night. Photo by Tilly Berendt.