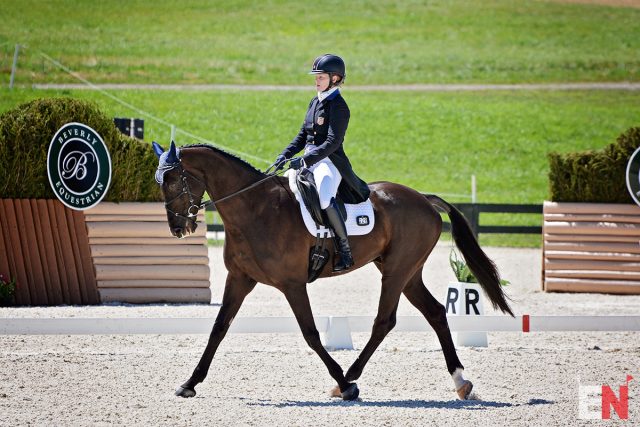 After a marathon day of dressage at the Brook Ledge Great Meadow International, presented by Adequan, Kim Severson and Cooley Cross Border top the FEI Nations Cup CICO3* leaderboard on a score of 28.3 on a picture-perfect day here in The Plains, Virginia.

“I think for his first (dressage test) back since Kentucky it’s a good place to start,” Kim said. “The big plan for this month is to work on (the test) for Aachen, so I think it was a good place to start. It’s nice to have such a lovely arena to be able to ride in. I was very pleased with him today.”

Kim praised the improvements to the venue since she last competed at Great Meadow several years ago, highlighting the major upgrades to stabling and the addition of the main arena with top-notch footing from Attwood Equestrian Surfaces.

As to whether Kim will run cross country tomorrow, she said her original intention was to run, but two weeks without rain in the area has left the footing quite firm on certain parts of Mike Etherington-Smith’s cross country course. She now plans to wait to see how the first few horses are cutting into the ground tomorrow and then make her decision. 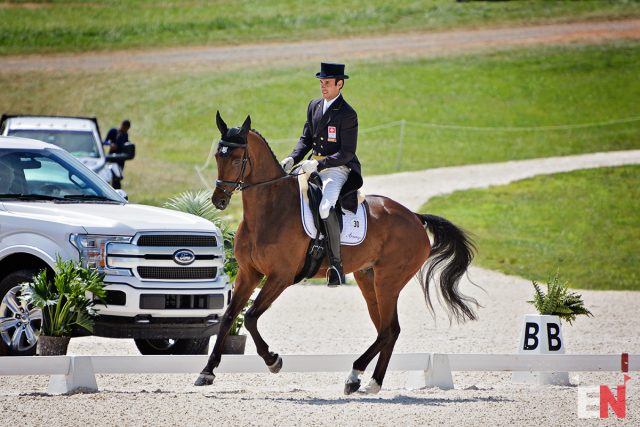 Felix Vogg and Colero are the sole competitors representing Switzerland here at Great Meadow and sit second after dressage on 28.8, which is a personal best score for this pair at three-star level.

While Felix had originally planned to return home to his base in Germany after the World Equestrian Games test event at Tryon in April, he said Boyd Martin and Phillip Dutton ultimately urged to stay in the U.S. and qualify for WEG at Bromont, which he did successfully last month.

The strategy paid off, as Colero, a 10-year-old Westphalian (Captain Fire X Bonita, by Bormio xx) owned by Jürgen Vogg, has been named to the Swiss WEG Team. Felix does not plan to go cross country tomorrow but said he couldn’t pass up the opportunity to expose his horse to the atmosphere for dressage and show jumping.

“It is a perfect place for a test ride in some atmosphere … which is really good for the horse,” Felix said. “I was a little bit surprised about him because normally he is shy in the ring, and today I was a bit too shy. The mistakes were on my side.” 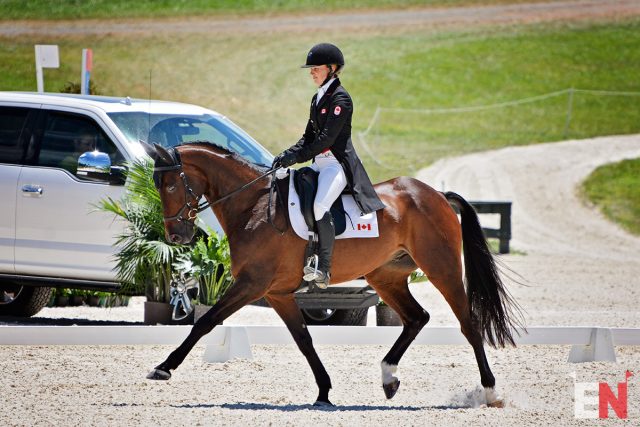 Jessica Phoenix and Pavarotti were originally named to the Canadian Nations Cup team for Great Meadow, but Canada opted to swap in Bogue Sound for the team instead. “Rotti,” a 16-year-old Westphalian (Pavarotti Van de Helle X Fidelia, by Foxiland), is representing Canada as an individual and sits third after dressage on 29.5.

“He’s such a competitor, and we’re just getting to the stage in our career where we go out and have fun,” Jessie said. “He’s so consistent and loves going into the ring and showing what he can do. There are still definitely parts of the tests we need to work on and get smoother in, but overall I was so proud of the way he carried himself. I think it was some of his best movement ever.” 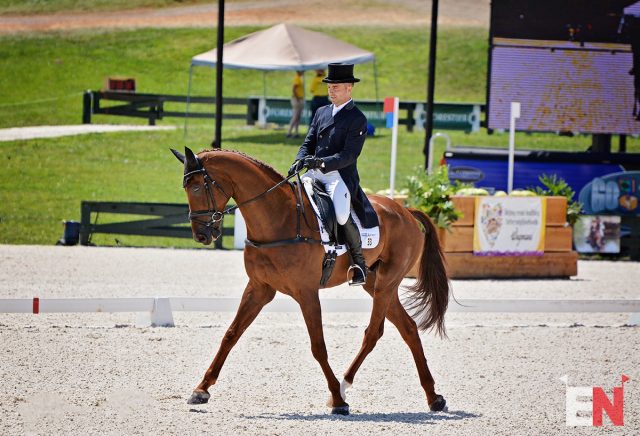 The top of the leaderboard definitely has international flair, with Ben Hobday and Jane Chambers’ Shadow Man, an 8-year-old Belgian Warmblood (Fidjy of Colors X Favorite Van de Keezerswinning, by Winningmood van de Arenberg), leading the charge for the British team in fourth place on 29.7. 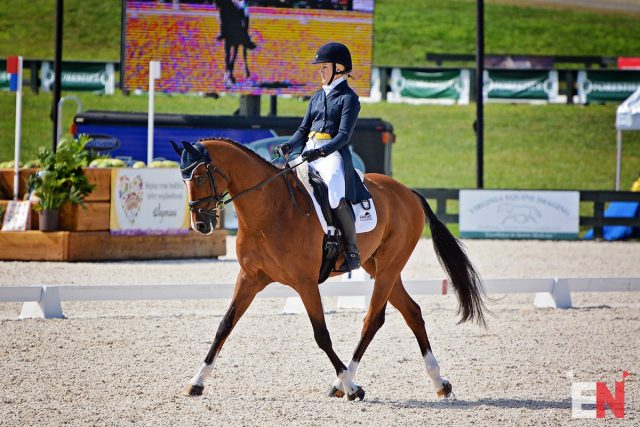 Allison Springer and Lord Willing, a 9-year-old Holsteiner (Lord Z X Legende IX, by Coriano) owned by the Lord Willing Syndicate, round out the top five on a score of 29.8 to give us a total of five scores in the 20s after dressage.

Will Coleman and Off the Record, a 9-year-old Irish Sport Horse (VDL Arkansas X Drumagoland Bay, by Ard Ohio) owned by the Off the Record Syndicate, sit in sixth place on 31.1, which is the horse’s best mark at three-star level to date.

Canada has two individual riders in the top 10 of the Nations Cup, with Waylon Roberts and Michelle and John Koppin’s Lancaster, an 11-year-old Canadian Sport Horse by Yavari, in eighth place on 31.3. 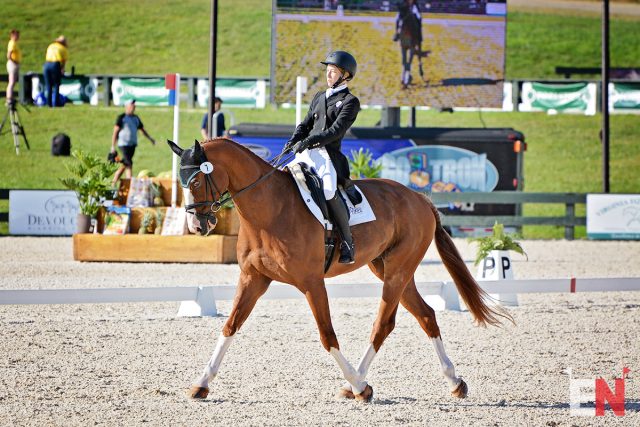 Kristen Bond returned to the three-star level for the first time since 2011 this season and is on track for another strong performance with Liz Bond’s Enough Already. “Drake,” a 10-year-old KWPN (Winningmood van de Arenberg X Zandora, by Landor S), scored 33.1 to sit in 10th place.

Click here to view the full rundown of scores after dressage. Looking to the Nations Cup standings after the first phase, Team GB leads on 97.7 points, followed by the U.S. in second on 103.0 points and Canada in third on 108.9 points.

Great Meadow is typically one of the hottest competitions of the year on the U.S. calendar — literally — with all of us melting in the sweltering Virginia heat and humidity. This year by some miracle from Mother Nature we had a delightful cold front blow in overnight to cool temperatures down today. The conditions could not be more perfect, and we still have much more action to come.

We are now on a break until 4:55 p.m. EST this evening when the CICO3* horses and riders will take on Marc Donovan’s show jumping course in the main arena. You can watch all the action live on USEF Network. The seven horses competing in the combined test will show jump immediately after the CICO3*.

Click here to catch up on all of EN’s coverage from #GMI2018. Go Eventing. 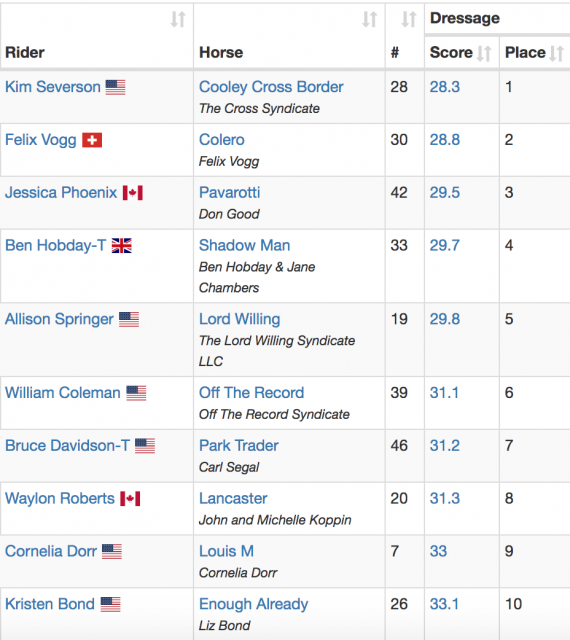