I have to tip my hat to Lisa Burnett for finding this gem on the Phoenix, Ariz., Craigslist ads and sharing it. Horse Nation also picked this up, and we couldn’t resist sharing it as well! While I think it’s a little bit tongue in cheek, it’s still pretty amazing, and we got a good giggle out of it. Find a ridiculous Craigslist ad while browsing the interwebz? Send it to [email protected]. 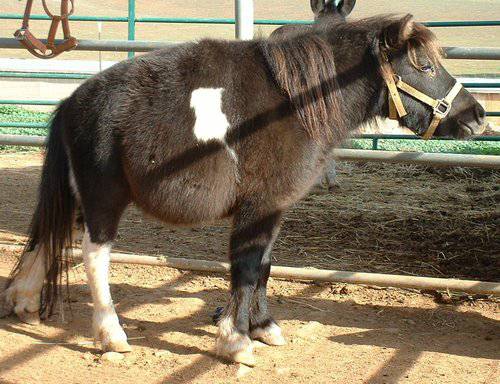 Shotgun is a two year old registered half TB-half mustang-half appy. He’s only 7 hands but he’s big boned and has TONS of aura. His conformation is absolutely PERFECT and his attitude is AWESOME. He is the best horse on the PLANET.

He is ambidextrous, speaks 5 languages and is an EXCELLENT beekeeper. He is TOTALLY UPHILL. His movement is like a PRIMA BALLERINA’s. I bought him for a hunter/jumper prospect, but he would be GREAT at endurance. Or reining. Or engineering.

I have been mainly doing dressage with him for the last 5 minutes and he can now perform a piaffe with his legs tied together. With 4 people on his back. What did I tell you, AMAZING, right??

He spent 4 years at my trainers, learning how to tie his shoes, do his hair and ‘collect’ properly (he still has a little bit of a problem with the ‘collecting’ part, but I’m pretty sure it’s because the sun was in his eyes).

He has been to 50 shows so far this year and totally won every class he was in at the Timbuktu Regional Bi-Decade Horse Show! He walks, trots, canters, gallops, stops, sneezes, hiccups, ties, loads, picks his own nose, chews, poops, shoes, and absolutely ANYTHING you ask him to do.

Although he is the best horse ever, he should not be ridden by anyone under six feet tall, who is not a weight lifter, who isn’t armed with a 9mm, and who doesn’t wrestle alligators for a living. Experienced riders only!

I have not had time to spend with him lately and plus I can’t afford his board due to finances and plus I want to buy a new ipad.

Looking for the PERFECT HOME for him. Preferably one who emails me every day before they do anything with him, just to make sure it’s exactly the way I would do it and that I approve.

Thanks for looking at my add!