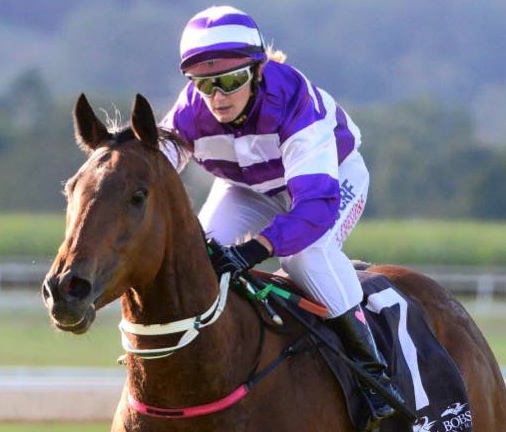 Sure, there are a few places that it’s fun to try riding your horse without a bridle. Places that come to mind immediately, at least for the first few times, include the roundpen or a small, empty arena with all the doors or gates closed.

Places I’d definitely never give this a shot include the track, during a race, on a fit Thoroughbred who’s never given this one a shot before… but that’s exactly what Laura Cheshire had to contend with last Friday at Murwillumbah in Australia when the bridle on her mount Secret Blend fell apart just a few strides into the race.

Watch the 11 horse carefully — the video quality isn’t great as it’s a video of steward’s footage, but you can see what you need to see:

Stewards footage from yesterday.. this song played when I got in my car to drive home and the relief was strong that…

Laura’s quick thinking prevented “Exo” from immediately stepping on the bridle or getting tangled in the reins as soon as the bridle broke; Laura reeled the tack up and was able to keep everything around the base of Exo’s neck for the time being. According to her interview with Australia’s Horse Racing Only, fellow jockey Robbie Agnew, mid-race, told Laura he would help guide her and Exo around the turn.

By the turn for home, most of the field seemed to realize that Laura had no bridle, and did a masterful job of steering clear of her to finish the race. Once under the wire, her fellow riders tried to help slow Exo down, but no avail — Laura and Exo were still off and running, and all she could do was tell everyone to get out of the way before there was a wreck.

Pony rider Mozzie Coleman met up with Laura and Exo, still galloping, into the backstretch — but with nothing to grab to catch and slow the horse, there was no way to help. Laura told him to let Exo go, as the horse had started racing the pony.

Laura’s terrifying ride continued all the way around the track for a second lap, with the pair thundering right by the steward who could only watch helplessly. The other horses were still exiting off the track, and fearing a big wreck should Exo attempt to bolt off the track, Laura impulsively asked the horse to turn via neck rein.

The pair turned towards the inside rail and headed into the turn for yet another lap, successfully navigating through the horses leaving the track before Mozzie on the escort pony caught up to them again. Still with nothing to grab to help catch the horse, Mozzie simply rode alongside before Laura suggested he ease the pony down, hopefully slowing Exo as well. Just as the Thoroughbred started to slow, a rein broke loose and wrapped itself around the horse’s hind leg, sending him back into a frenzied gallop again.

In a stroke of luck, Exo never stepped right on the rein, which would have caught and likely flipped the pair; when the rein came loose Laura again managed to reel it into her hand while also contending with her saddle slipping to the side. Again using the neck rein, Laura managed to turn Exo towards the outside rail, intending to turn him all the way in the other direction to head up the mile chute and hopefully into a dead-end where the horse would stop.

Exo and Laura turned nearly right into the outside fence, and while Laura felt Exo consider jumping the rail, he fortunately decided merely to stop, bouncing lightly off the fence and allowing Laura just enough time to leap off and wrap one of the reins around his nose, keeping him under control. Both horse and rider were uninjured, if perhaps exhausted from this wild ride.

Laura, while clearly demonstrating some amazing horsemanship and quick thinking, is humble about the situation. “Ultimately I am in this game because I love horses and not just because I want to win races,” she told Horse Racing Only. “At the end of the day, as much as I tried to look after the horse … the horse looked after me even more. That horse could have done anything he liked for three laps. He could have made bad decisions with bad consequences.

“He could have put both of us through a fence and maybe we wouldn’t have walked away from that… but, instead, he kept me safe.”

Laura Cheshire, you’re a woman after our own hearts and an official Horse Nation hero. Best of luck in your future races.

Read Laura’s full account of the incident at Horse Racing Only.