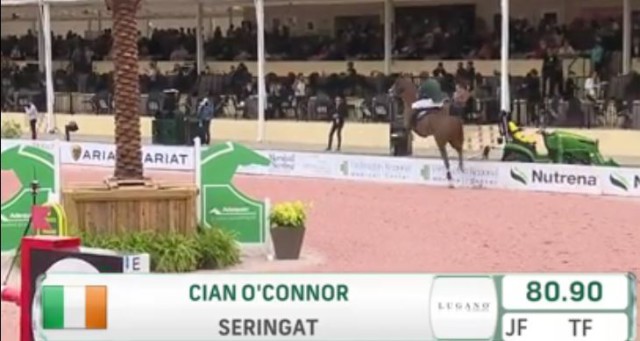 Cian and Seringat make a grand exit. Screenshot via Facebook

Cian O’Connor has an incredible knack for picking up rides with personality. Earlier this year we got to see the pizzazz that Good Luck likes to bring to the ring after a few weeks of R&R, and this past weekend, Cian’s ride Seringat had a show of his own to share with the world.

During the opening round of the $216,000 CSI04* Grand Prix in Wellington this weekend, Cian and the 11-year-old Selle Francais gelding put in a foot-perfect performance to snag a spot in the jump-off, but Seringat decided the only way to celebrate was to keep going.

Posted by JumpingSquad on Sunday, March 5, 2017

The proud jumping machine leaped the arena barrier to the delight of the crowd and amusement of Cian, who always seems to be extremely good-natured about his horse’s unique ways of getting the job done. The pair would ultimately finish this class just inside the money in 12th place after taking a pole down in the jump-off.

Cian and Seringat have made a real splash since joining up in November 2016, instantly finding a kind of competitive rhythm and simpatico. They were in the top ten in two grand prix classes at Deeridge Farms in February, won a Table A Grand Prix in Ocala during international week,  helped Ireland secure the win in the FEI Nations Cup in Ocala and repeated that epic performance at the Nations Cup this weekend in Wellington.

Essentially, they’ve done more in 12 weeks together than most horses and riders will accomplish in a lifetime.

As it goes in this sport, this will be Cian and Seringat’s final performance together. Just today Cian shared on his Facebook page that the horse has been sold to Norwegian legend Geir Gulliksen. Geir has competed in three World Cup finals, four World Equestrian Games, and was part of Norway’s Olympic team in Beijing. He will surely put the talented gelding to good use.

In the meantime, we look forward to seeing what other personalities emerge from Cian’s string, as they are bound to do.