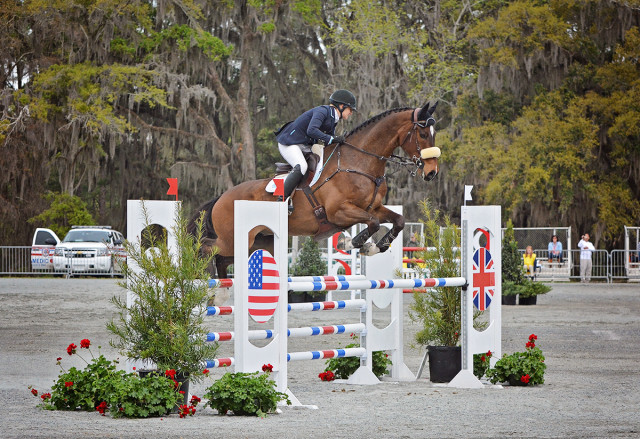 Megan Lynn and The Natural E. Photo by Jenni Autry.

Megan Lynn and Elevate Event Team’s The Natural E clinched a wire-to-wire victory and the biggest win of their career today in the Red Hills International Horse Trials CIC*. One rail down over Chris Barnard’s show jumping course saw them finish on a final score of 42.0.

Megan met Leo, a 9-year-old Danish Warmblood gelding (Linardo X Camelott Af Ommestrip, by Come Back II), two years ago after Karen Isberg, president and founder of Kentucky Performance Products, decided she wanted to own an event horse. Karen had sponsored Megan before, but she never expected to have her as an owner.

“I asked her, ‘Don’t you want somebody more professional who’s been there done that?’ She said, ‘No, I want you.'”

Megan and Karen met with her trainer, Missy Ransehousen, and formulated a plan to create the Elevate Event Team. “Missy had in mind what kind of horse she wanted for me and sent me over to Europe … I tried several horses and when I sat on him, I knew he was the one,” Megan said.

“The funny thing is he had the least amount of experience. He had never evented before, and he didn’t really have a show record, but I sat on him and I thought, ‘This is my horse.’ We brought him over, set a plan and he’s stepped up to every plan that we’ve asked him to do.”

Megan, 27, splits her time between teaching and training professionally and working as an ophthalmic technician at the University of Kentucky Hospital in Lexington where she’s based. She works part-time at the hospital two to four days a week.

“I always said I never wanted to make eventing a career because I didn’t want to get burnt out because I love it so much, but I’m finding that I’m loving it as doing it more of a career,” Megan said. “Maybe it will end up more that way.”

The inspiration for Leo’s name and the Elevate Event Team comes from Kentucky Performance Product’s natural vitamin-E supplements. Megan said that she is incredibly grateful for Karen and Missy’s support and wouldn’t have made her first trip to Red Hills — coming home with a blue ribbon, no less! — without them. 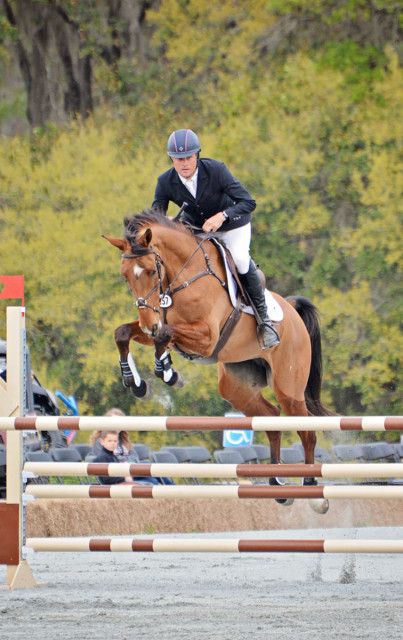 Boyd Martin and Christine Turner’s On Cue, an 11-year-old Anglo-European mare (Cabri d’Elle X On High, by Primitive Rising), jumped clear and inside the time in her FEI debut to move up one spot on the leaderboard to finish in second on 46.0. A former ride of Sinead Halpin and Michael Pollard, Boyd started his partnership with the mare over the winter.

Leslie Law and Beatrice Rey-Herme’s Up to You de Lorage (Mylord Carthago X Mirande de Saunoir, by Narcos II), a 9-year-old Selle Francais gelding, had one rail down to finish in third place on 46.6. A previous mount for French rider Henri Bernard, Red Hills was the horse’s second start in the U.S. since being imported.

Looking to the rest of the leaderboard: Lucia Strini and A Real Cooley finished fourth on 52.4, with Lisa Marie Fergusson and LandLunar in fifth on 52.9. Rebecca Hoos and Davarusus H finished sixth on 53.3, and Jessica Phoenix and Maserati One were seventh on 53.5. Olivia Grabaskas and One and Only were eighth on 54.2, with Holland Garrett and LA Lux in ninth on 55.7, and Emily Mainolfi and Tacaro rounding out the top 10 on 57.4. 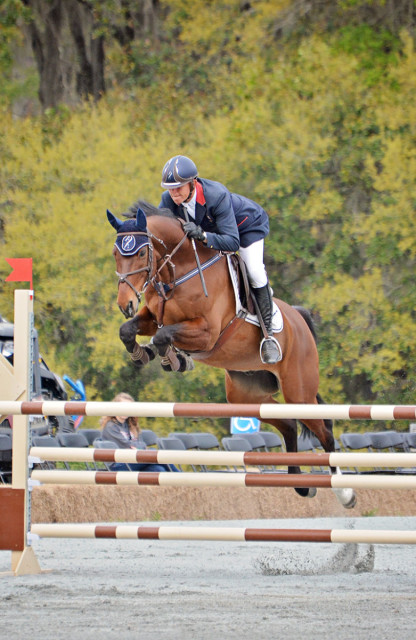 Leslie Law and Up to You de Lorage. Photo by Jenni Autry.

About 30 percent of the division jumped clear rounds show jumping round inside the time: Boyd Martin and On Cue (2nd), Jessica Phoenix and Maserati One (7th), Olivia Grabaskas and One and Only (8th), Alese Lyle and Fernhill Lochain Guy (11th), Carson Richards and Fernhill Mr. Cool (14th), Rebecca Cornetta and Liondrive (15th), Natasha Knight and Harbour The Truth (16th), Leah Khorsandian and Landor (19th), Arden Wildasin and Apogee (22nd), and Autumn Schweiss and Jive About Wounderland (35th).

We have to send speedy well wishes to Donna Miller, who is recovering at Tallahassee Memorial HealthCare after falling from HC Celtic Mark on the CIC* cross country yesterday when they ran into a tree following the first water complex. She sustained multiple fractures in her face, a broken nose and fractured vertebrae in her neck.

Click here to catch up on all of EN’s Red Hills coverage so far. 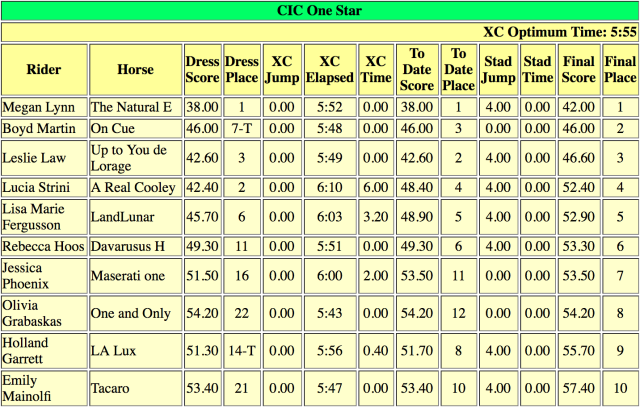