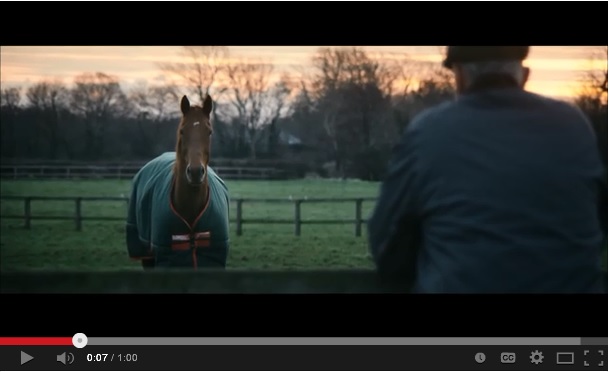 We post a lot of videos here on EN– at least two per day. It’s hard to imagine what life would be like without Youtube or it’s cousin Vimeo. As the saying goes…if it isn’t on Youtube, it didn’t happen. And so, here’s what DID happen in 2013: some of the most-liked and most-watched moments captured on camera and shared on Eventing Nation. I haven’t embedded all the videos here– it would make the site crash– but click on the links to view.

“Once again, ladies and gentlemen, please keep your dogs on leashes!” In a repeat of Rolex 2009, Buck Davidson once again was chased around cross-country by a dog. Luckily, his horse Riviera didn’t seem to care! Buck and Riviera finished 10th in the Open Prelim-A division.

This one is a MUST SEE that will start your workday off right. I think Budweiser’s ad executives have some competition from Horseware Ireland… you’re going to love this commercial. (Turn your speakers up.)

April 14: A Wild Ride at Pimlico

This race yesterday at Pimlico appears to be business as usual until the leader, Spicer Cub ridden by Xavier Perez, blows the turn and bolts wide coming toward the home stretch. The jockey somehow regroups, only to have the horse bolt again and run full speed between the outside rail and the starting gate. And to top it all off, Spicer Cub straightens out to come roaring home — with the announcer yelling, “Do you believe in miracles?” — after Xavier has lost his irons, and he still nearly wins the race.

The wait is over… thanks to the USEF Network, here is the full cross-country round of the overnight leader, Andrew Nicholson and Quimbo. What an extraordinary horse! And thus, #Nicholsonontwitter was born.

Henny’s Rolex video is back online and better than ever. A million thanks to Peter for posting such an amazing video. Go Henny and Peter.

June 10: Why You Learn to Emergency Dismount

The first 10 seconds of this video will make your heart stop. At Bramham CCI3* (Under 25 division), Arthur Bonneau riding Quasar du Saillan came too quickly on approach to a big galloping fence (#7, triple brush), and missed. The rider actually TOUCHES THE GROUND with his hands in front of the horse’s face, ripping off the bridle in the process. Miraculously, the horse recovers and flings the rider back into the saddle. (HOW DID THAT HAPPEN?!) However, the horse takes off with bridle now tangled around his hind feet and the rider, left with no way to control his horse, does what any good Pony Clubber would do: an emergency dismount.

This video is from Chattahoochee Hills this past weekend, and features one of our Blogger Contestants, Rick Wallace! Rick was cantering around his Training level show jumping in a good fashion when there was a little OOPS moment, which resulted in an impressive and hilarious attempt to avoid elimination. One must give credit to the horse, Ultimate Decision, for tolerating such shenanigans with aplomb, and give a round of applause to Rick for his tenacious attempt to monkey his way back in the saddle!

A spectator captured Caroline Harris and Zamio’s trip through the steps yesterday in the Novice Championships at the Festival of British Eventing. Zamio took one look at the steps and decided he wanted nothing to do with them. He then proceeds to defy gravity and perform a sort of pirouette down the steps, somehow managing not to flip over in the process. Now THAT’S an Oh Crap Moment.

Well, it’s not every day you get to see a puissance competition, and it’s certainly not every day that you get to see a horse jump 2.2 meters (7 feet 3 inches for laymen)! Columbian Show Jumper Daniel Bluman and his grey stallion Clyde cleared the impressive height at the Dublin Horse Show in the Land Rover Puissance. What would you be thinking galloping up to that big of a fence!? Check out how big that wall is compared to the horse…he can’t even see over it!! Enjoy.

Evention launched a brand new season of videos and a sparkling new website to go along with it. We were assured that our entertainment and education would continue every two weeks, but as it turns out, they just couldn’t stay away from us for that long. Inspired by “How Animals Eat Their Food“, this week’s fun video features some very good imitations of hungry horses that we’ve all owned at one point or another.

Not only are quadrilles incredibly difficult and awesome to see in action, but the costumes on both the horses and the riders in this instance are unbelievable. How long do you think it took to create each costume, organize and practice the dressage test, and then execute it? How awesome are those horses for calmly wearing what looks like an entire body suit with a fake colored tail? I’m seriously impressed.

Have you ever watched two seemingly flawless jump rounds at a show and wondered, “What’s the difference between first and second place? How did that one person change his lines and gallop faster with such precise turns and huge jumps?” Well, in this short but cool video, we get to see the comparison between first place and second place as Kent Farrington on Blue Angel and Patrice Delaveau on Lacrimoso HDC go through their paces in the jump off. Pretty cool!

SpectraVET is committed to providing only the highest-quality products and services to our customers, and to educating the world in the science and art of laser therapy.

We design and manufacture the broadest range of clinically-proven veterinary therapeutic laser products, which are represented and supported worldwide by our network of specialist distributors and authorized service centers.