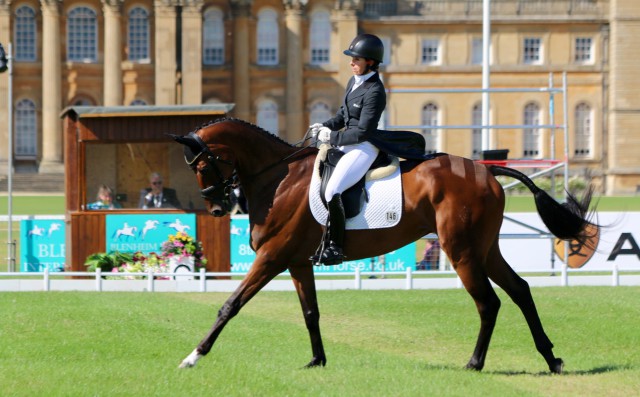 Bettina Hoy and Seigneur Medicott take control of the CCI3* on the first day of dressage at Blenheim Palace International Horse Trials. Photo by Samantha Clark

As expected we were treated to a beautiful display of dressage this afternoon by Bettina Hoy and Seigneur Medicott, and accordingly their score of 32.9 gives them a whopping overnight lead over Harry Meade in 2nd on 39.6 and then Hannah Sue Burnett on Harbour Pilot in 3rd on 41.7.

Seigneur Medicott was one of the few horses not to get a little rattled by the flapping flags and rattling in the grandstand — it’s very windy here this afternoon. Bettina said he noticed the distractions but she was proud of the way he handled them.

“It felt really good, he’s just an amazing horse, he’s so lovely to ride. I was very pleased with him, he’s only a young horse and a beautiful mover. I would say that test is pretty much in line with the other tests he’s done although obviously it’s easier to ride on sand like at Aachen. I could feel him every now and then losing his concentration a little bit but he tries so hard to then come back and concentrate on me so it was only for a split second. He’s a very sweet-natured horse and I think that makes it a lot easier in the test.” 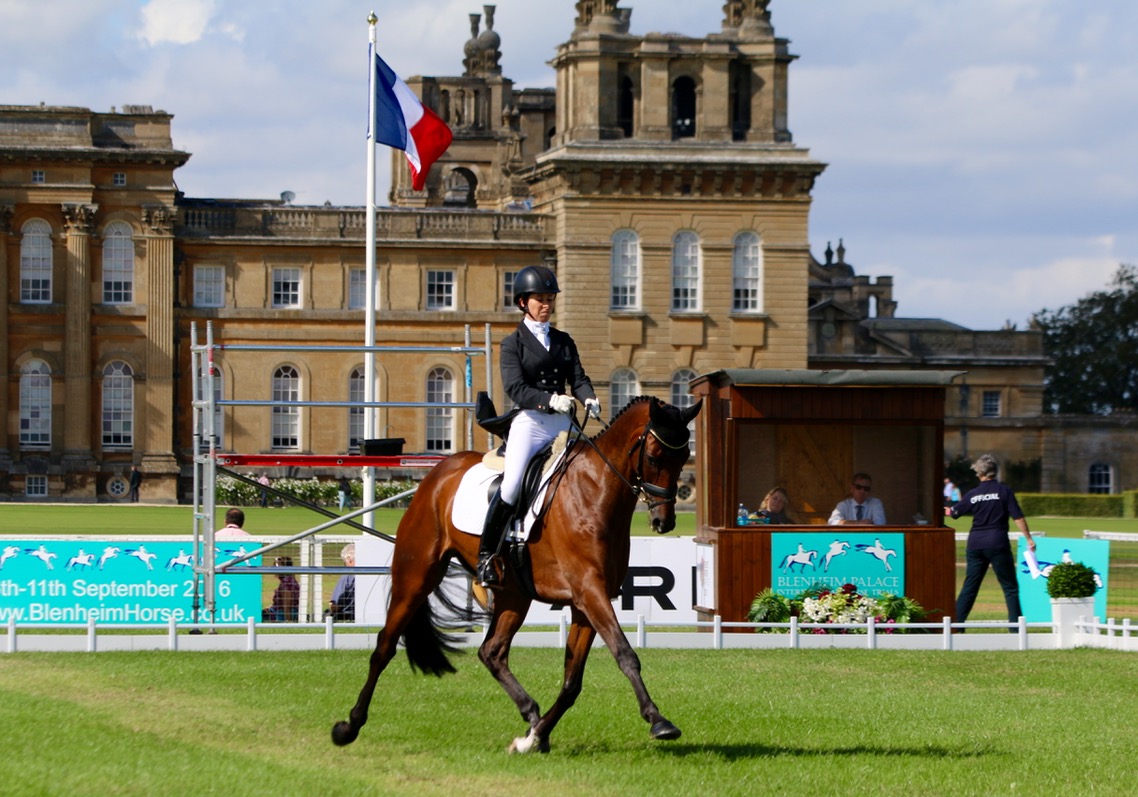 Bettina has had the horse since he was a five year old and all he’d done was show jump so she he has spent his entire eventing career thus far with her. Seigneur Medicott is not related to Mr or Mrs Medicott; it’s their original owner that is the connection.

Bettina walked the course for the first time yesterday. “It’s a beautiful course, it’s really nice,” she said. “The ground is great, even if we get a bit more rain (yes, rain on Saturday is in the forecast naturally!) I think the ground will be able to cope with it. It’s Blenheim: it’s up and down and they have to be very fit so I’m glad I’ve done Blair already with him so he’s a little bit used to some of the hills at least!” 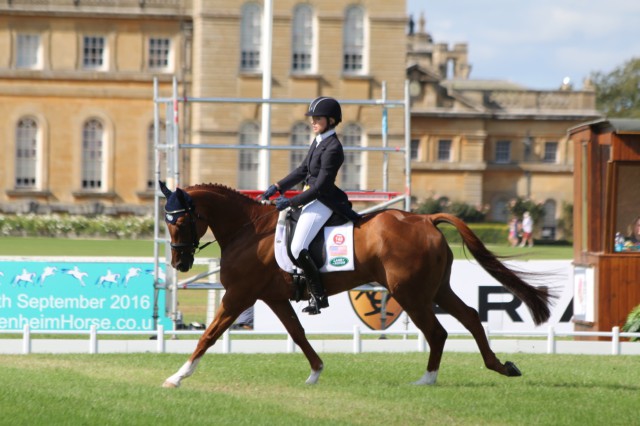 Holly Payne Caravella and Santino move into the top 10 after the first day of CCI3* dressage at Blenheim Palace International Horse Trials. Photo by Samantha Clark.

Holly Payne Caravella and Santino were a couple of horses later and produced a level, mistake-free test. Santino’s changes were expressive but clean, and Holly looked like she kept him relatively calm despite all the distractions outside the arena; it was only when everyone clapped and cheered (we have a fantastic U.S. support crew here!) as she left the arena and he almost galloped away that it was clear just how close to the boil he was!

Nonetheless their score of 46.2 is good enough for 8th overnight. (Yes, we have two Americans in the top 10 after the first day of day of dressage here at Blenheim!)

“He was pretty good, I was pretty pleased with him. I’m always going to be critical and there were things I’m not going to be happy about it but it’s super windy and flowers were blowing over and the tents were flapping and he didn’t seem phased at all by that which made me really happy. I was really happy with him.”

Santino has spent the last week at Burghley keeping his stablemate Never Outfoxed company and perhaps this helped. “It probably helped him settle into the atmosphere, he was real quiet at Burghley,” Holly said. “I hacked him around Burghley and I think he’s definitely getting used to it, he’s not affected by the atmosphere here.” 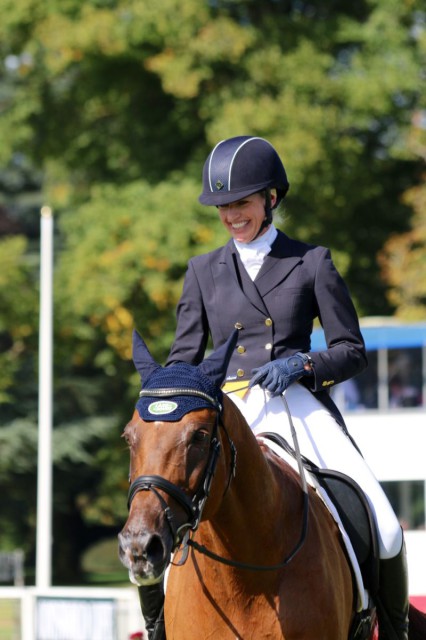 Holly Payne Caravella and Santino leave the Blenheim Palace main arena after their test which has them in 8th place overnight. Photo by Samantha Clark.

Holly has had a quick peek at the cross country. “I think it looks really good, it looks way more do-able than Burghley!,” she said. “I mean there are definitely questions out there but I thought it looked really inviting. When I was here in 2009 we ran the course backwards so you got to run through the water once before you had the big crossing so I think that will ride pretty hard going away. I think you have to know what you’re going to do and hold your line, but it’s good and galloping and inviting. I think it will be a good course for him.”

Likewise Hannah thinks the cross country will suit Harbour Pilot well also. “It looks really big actually, I was a bit surprised at how substantial it is, it looked kind of like a four star when I walked it the first time,” she said. “I like the way it builds — the first couple of minutes look really nice, it’s large but you can ride against it and the combinations are inviting. I think the middle bit is really, really serious especially if we get the rain we’re supposed to get. I think it’s going to ride really tough there in the middle of the course and then it’s a bit nicer on the way home. So … a lot to do!

“I like the in on the first water. It’s really, really big and that’s actually good for him because I’ll be able to ride against it a little bit because he can get strong down the hills, and then the out is really difficult (fence 15A and B) — it’s a very, very sharp angled three strides corner to corner. Everybody’s going to have to be on their toes, that’s for sure!”

David O’Connor is in agreement with both riders. “It’s a good course, it’s well-presented. Not going through the main arena is a fairly unusual thing for us here (due to ERM and timing). I think all the exercises are appropriate, I think the first water is strong, it’s probably the strongest combination in the whole thing. I think everything else seems to be kind of right — bulletproof and predictable — but the first water is quite strong.” 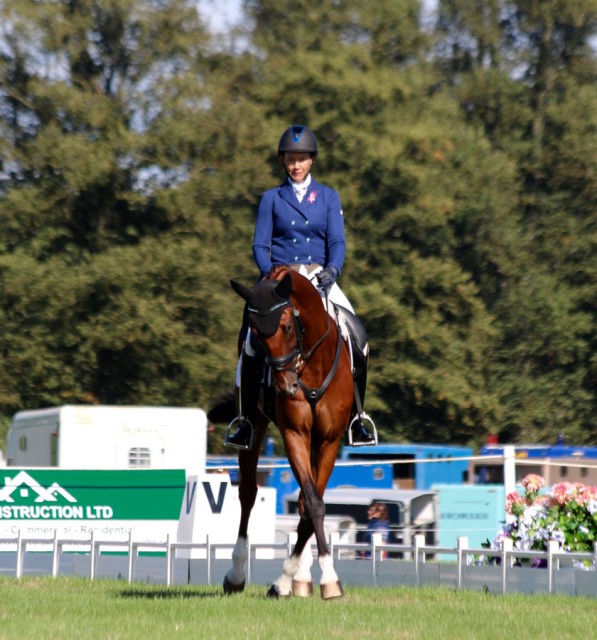 Tamie Smith and Dempey II in the CIC3* for 8 and 9 year olds at the Blenheim Palace International Horse Trials. Photo by Samantha Clark.

Tamie Smith rode the 8-year-old Dempsey in the CIC3* for 8 and 9 year olds later this afternoon and but for a couple of bobbles they did a nice test. They scored 49.3 to sit in 20th place overnight.

There’s plenty more to come from this young horse and Tamie did well to contain him with the wind and the atmosphere. “He was pretty wound up — it’s really windy and the flags are flapping. This ring almost feels more electric than the CCI arena,” Tamie said. “I’m really proud of him, he tried really hard and he had some good moments. I’m really happy with his first time here and he’s come a long way.”

Dempsey is in the CIC3* because Tamie wasn’t sure if she’d get two horses in the CCI as this is such a popular and oversubscribed event; he heads over to Boekelo after this.

Tamie had not had a chance to walk the course yet — “I’ve been a bit busy!” she said — but with both her dressage tests behind her now she was excited to have a look at it and promised to let us know her thoughts tomorrow morning.

Kylie Lyman sits in 18th place in the CIC3* on Lup The Loop on a score of 47.7 with one error of course. Apologies for not catching her today, but I hope to track her down tomorrow.

The forecast is for rain tomorrow and Saturday but that might well change. The wind was a real factor this afternoon, and having to take the fact that the weather is probably going to be influential is what eventing is all about. We have some heavy hitters due to enter the CCI3* arena tomorrow, not least our own Will Faudree and Pfun at 9:22 a.m. GB time but also Pippa Funnell, Nicola Wilson, Sam Griffiths and former winner Aoife Clark on Wasting Light.

Well done to all the U.S. riders today, and thank you as always for taking the time to talk right after your rides — I certainly appreciate it and I’m pretty sure everyone sitting on tenterhooks back home does too. It’s great to see Lisa Barry, James Daniel Connor and Carol Anne Parker here amongst many others cheering and whistling for all the Americans. “We’re the morale officers, we’re here to boost morale,” said James last night, and they certainly are.