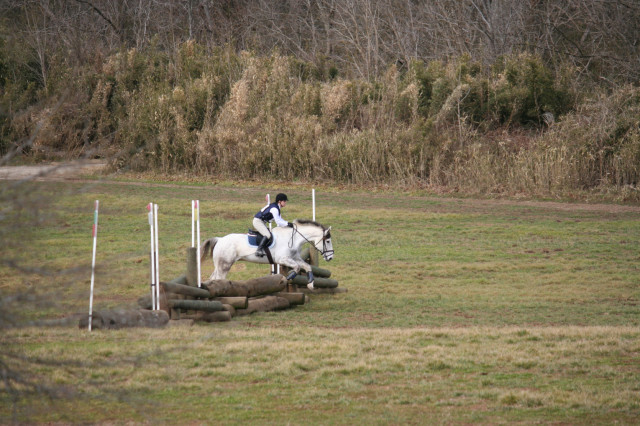 There’s no doubt about it – this is a tough sport we do. Both for rider and horse, eventing is an incredible challenge: the performance, the knowledge, the fitness, the focus, the mental. Oh god, the mental. I think there are few sports that challenge you in so many ways in so many areas as eventing does.

I remember when I first decided to event about three years ago, and Ollie and I knew nothin’ ’bout nothin’ (OK, we still don’t, really). I frequently heard people say, “Well any time you end on a number and not a letter, that’s a good day.” Coming from the aiming-for-perfection of Hunterland, I initially didn’t quite get that. What, we’re supposed to feel good about merely finishing the actual competition? That doesn’t sound reassuring at the end of a bad day.

I’m a perpetually nervous/anxious rider. It’s just a part of my personality as a whole to be an anxious crazy person about, well, everything. Coming from the baby hunters, I was used to getting super nervous for my rounds. But, I knew that if I blew the first course, I had a few more rounds to use to freaking get over myself and put in the performance I knew I could potentially do. I also knew that I would totally suck in the hack, as Ollie is a Drafty McDrafterson Freight Train Mover Extraordinaire. But that’s OK, we’d do better over fences, and it wouldn’t matter.

Eventers can’t do that.

One shot. One shot on each horse in a given day. One try to get it done. And if your horse can jump but not dressage? Fugheddaboutit.

But the difficulty in this sport is not just the one-chance aspect. Or even in learning the mechanics of three disciplines. The most difficult part, I think, is extruding from deep within you what’s needed to make it all happen. It’s a test of character and fortitude. Of patience and bravery. Of confidence and acceptance. Understanding and chutzpah. Being subtle, being forceful. Of understanding both your limitations and those of your horse – and working with them, not against them.

And with all of these areas where eventing tests you, some are at times in complete discordance with each other during different parts of the competition. What a horse needs from the rider in dressage is not the same rider he needs in the cross country field. And, of course, that means that at times, this competition will go against the very nature of who you are as a rider. As a person. And maybe against your horse’s natural tendencies as well.

Today, I learned that my fear of forward manifests even when I don’t realize it. I climbed through a jump, obliterating it. It was, of course, my fault. I thought I was asking for more pace, but I really wasn’t. I was imagining myself asking for it, and bracing for inevitable failure. When I reached down deep to make forward happen (and I did do it in the end), it was winning a battle. But that’s a war I’ll always fight, if I’m being honest. I may become a better fighter, but that demon will always be there.

I am also slowly learning to fight against my perfectionist nature. When things aren’t going well that don’t come easily to me or Ollie, I have a tendency to give up. To not complete the tight turn and bail out instead. To not insist on pace. To not insist on that correct bend or connection. To not do anything that I know that we can’t do easily, because my pea brain emphasizes the appearance of success over trying and failing — but learning. Failing is scary.

Or in spite of their horse being a big chicken at heart. Or a sloth. Or having a tendency to get strong. Or in spite of knowing they will nearly always have time on cross country, or that they will always take certain options.

And each time we end on that beautiful number, whatever it is, it’s a testament to the fact that today, we were able to fight all of our demons and challenges through all three phases. Now, that’s not to say, of course, that you didn’t fight if you ended on a letter. The number is just a physical representation of the fact that, by golly, you did it today. You fought and won.

Ribbons and prizes are nice, as is recognition. But I don’t think those are what drive most of us in eventing. Making ourselves and our horses who they need to be. Fighting those battles. Becoming better people and horsewomen and horsemen.

In spite of. And I think that’s what makes eventers great. What makes them special.

Given my personality and tendencies overall, cerebrally, eventing should be the last sport I should have taken up. But that’s OK. I’m going to go out there and do it, in spite of myself.

And it’s going to be awesome.

About Wendy Angel: I’m a 30-something amateur recovering-weenie newbie who is trying to learn the eventing ropes as I bumble around Beginner Novice. My partner in crime, Oliver, is a 16.2 woolly mammoth cross that is supposedly Percheron/TB, and he also happens to be the most patient and hysterical horse in the world, with the largest noggin to boot (seriously, just look at it). When I’m not riding or being clumsy and weird, I love spending time with my husband Bora and our three mutts, and working in marketing. Well, actually, who am I kidding — I am *always* weird. We just moved to the Dallas area. Read more at my personal blog www.RidingWithScissors.com.