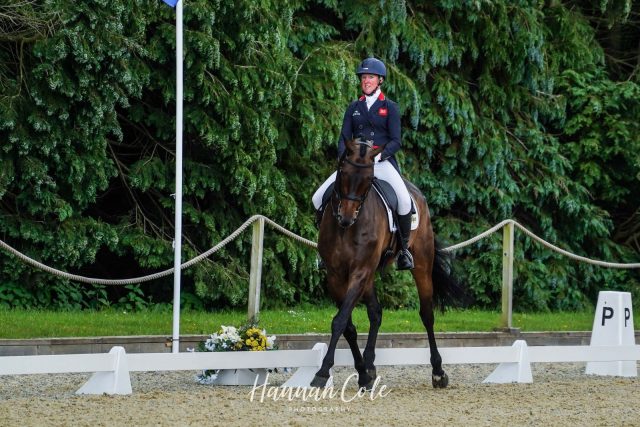 There’s a strange irony in seeing Nicola Wilson in the lead in the CCI4*-L, a spot she holds with the ten-year-old JL Dublin: she’s long sought the win in this class at its ordinary venue, Bramham, which is her local international. Now, she’s travelled the length of the country and found herself in that long-coveted spot, which she earned with her final score of 28.7 and a pleasant, fluid, and mistake-free test.

This is a second CCI4*-L for this horse, and the second to take place at a replacement fixture: he finished 10th after jumping clear inside the time at Burnham Market’s Blenheim replacement in September. Despite his relative inexperience, though, he’s a horse that could well suit the major test to come tomorrow: it’ll be a stamina test and a time challenge, and he’s generally both fast and reliable across the country, picking up time penalties in just one of his five four-star runs. 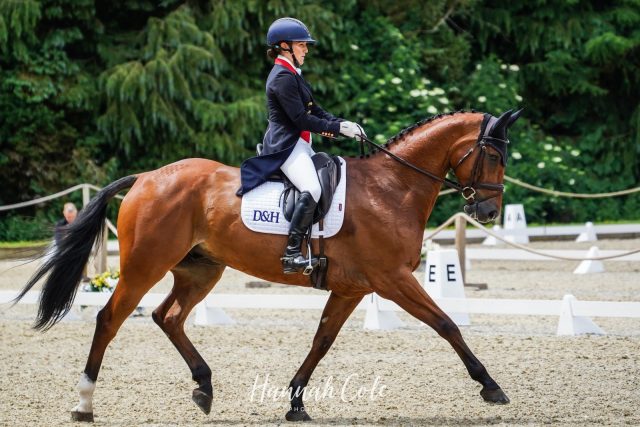 A consistent test with some marks lost in the first flying change earned Laura Collett and Mr Bass overnight second place and a score of 29.2, pushing yesterday’s leaders Pippa Funnell and Billy Walk On down into provisional third on their 29.4. 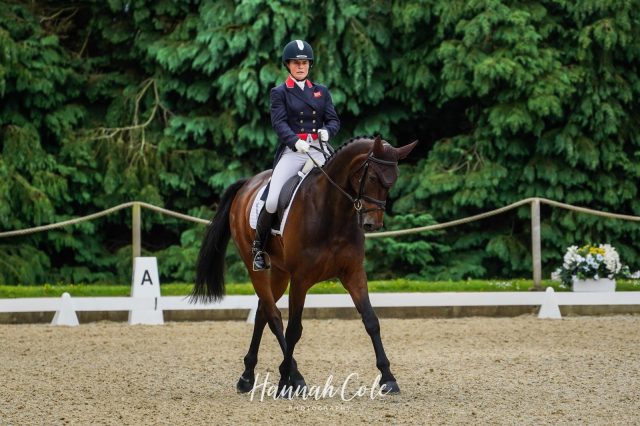 Piggy March‘s Brookfield Quality — known at home as ‘Nervous Norris’ — once again proved his, well, quality and will head into cross-country in fourth place on a 29.6, earned not through extravagance but through accuracy and consistency. Below them, Pippa Funnell makes a second showing in the top five, this time with Maybach on a 29.7. This a second CCI4*-L for the eleven-year-old, owned and previously campaigned by Sweden’s Hedvig Wik, who made his debut at Boekelo in 2018 but has only competed at two FEI events in the years since. With no cross-country jumping penalties on his international record, he could be set to make the ultimate comeback this week. 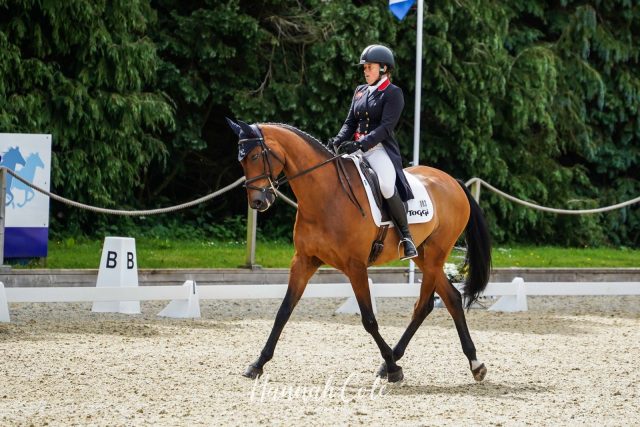 The top ten in the CCI4*-L going into cross-country.

The smoking hot CCI4*-L for under 25s is looking rather like a match race between reigning under-25 National Champion Yasmin Ingham and formidable competitor Bubby Upton, who led until the end of the day with yesterday’s frontrunner Cannavaro on 28.3. He was initially knocked out of the top spot by one of Bubby’s other horses, 2019 Young Rider silver medallist Cola III, with whom she scored a 27.7. 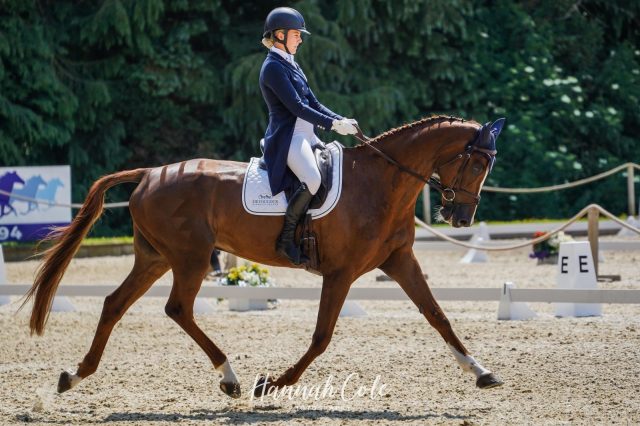 But it was the last combination of the day who shone brightest in the eyes of judges Angela Tucker, Les Smith, and Anne-Marie Taylor. Yasmin Ingham‘s ten-year-old Banzai du Loir has already had high-profile starts, with a win in the eight- and nine-year-old CCI4*-S at Burnham Market’s Blenheim replacement last year. This is a CCI4*-L debut for the gelding, who was produced by France’s Axel Coutte and bought with the 2024 Paris Olympics in mind – and he’s off to a flying start after putting a 26.9 on the board, just missing some marks in the first flying change and final centreline.

“We’re still not 100% glued together, but there’s so much more we can do,” says Yasmin. “He’s got the wow factor so I just need to nail a few areas, like the flying changes, but he’s only done a handful of 4-star competitions. The cross-country will be a big ask for him, but he is the sort of horse that will jump where I ask him.” 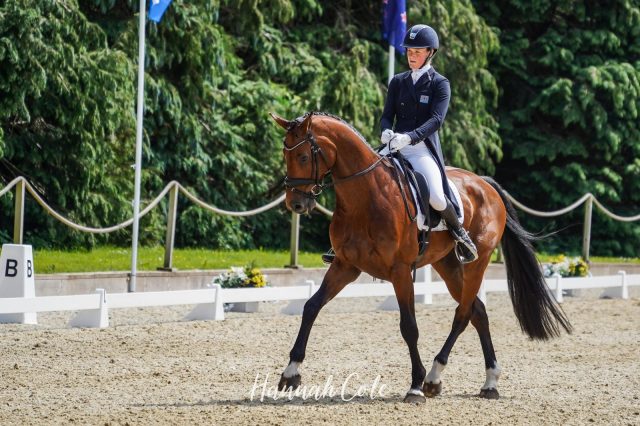 The top ten in the CCI4*-L for under 25s at the culmination of dressage.

Though no one could eclipse Laura Collett and London 52‘s 21, posted in yesterday’s first day of dressage, one rider gave it a solid double shot: China’s Alex Hua Tian put a competitive 21.6 on the board yesterday and followed it up with a 21.4 today aboard Jilsonne van Bareelhof, who led the dressage in last month’s Houghton International CCIO4*-S and is, according to the rider, “the most talented horse I’ve ever sat on.” 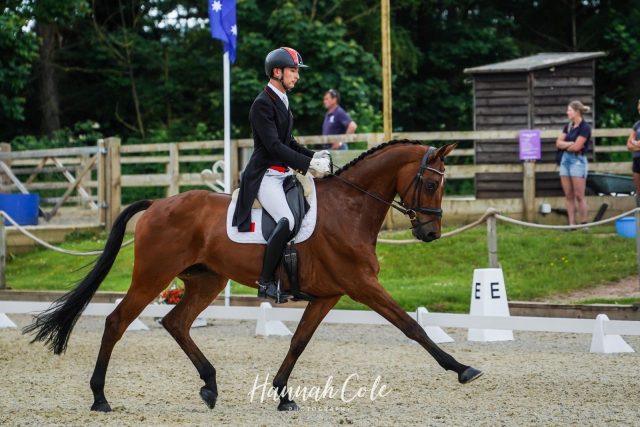 Today, his test wowed both judges and spectators alike, earning 10s in the extended and collected trot as well as the final centreline. But minor mistakes in the second flying change and first walk pirouette precluded a step into the lead, despite trending sub-20 for the first half of the test.

“I’m really pleased with him – he’s a lovely animal,” says Alex of ‘Chocs’, so named because he’s ‘big, brown, and Belgian.’ The extravagant jumper will put up a tough fight in tomorrow’s showjumping, a phase he excels in, but his inexperience at the level still tends to show through against the clock – he finished fourth at Houghton ultimately after clocking up six time penalties, and Alex will likely look to educate the horse at speed on Sunday. He’ll get the chance to find the most economical routes on course on his first ride, Olympic mount Don Geniro, who sits third.

“We’ve had our ups and downs with ‘The Don’, but Rio in 2016 [where they were eighth, a Chinese Olympic record] was pretty special because he was only nine. It was a gamble but he thrived. He is probably my first choice for Tokyo, but I wouldn’t be unhappy if I ended up taking PSH Convivial [bronze medallist at the 2018 Asian Games], who has just done his best ever test,” says Alex, who sits 12th on 24.5 with PSH Convivial, or ‘Spike’.

Tomorrow brings us a huge day of cross-country action, with the CCI4*-L trailblazing from 9.00 BST/4.00 a.m. EST, followed on by the under-25 class. The CCI4*-S class will head into the showjumping phase, which gets underway from 10.00 a.m. BST/5.00 a.m. EST. You can livestream all three classes through Horse&CountryTV‘s subscription service.